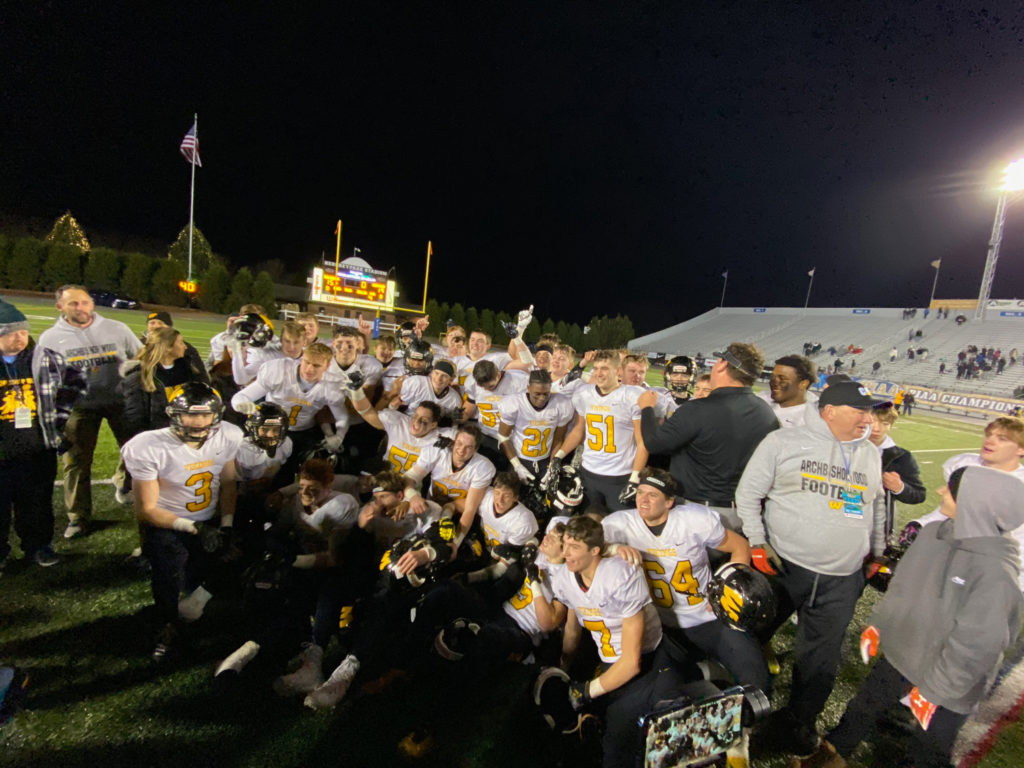 HERSHEY — Anyone else might have been a nervous, twitchy mess. Cardel Pigford wasn’t.

The 5-foot-9, 165-pound Archbishop Wood junior had had his problems a month ago holding on to the ball. Now the Vikings were asking him to hold on to their season.

Pigford slid toward the goalpost, and Wood quarterback Max Keller found him through a maze of defenders with :04 left, punctuating an improbable season with the exclamation point of a 19-15 victory over District 1 champion Cheltenham for the PIAA 5A state championship Friday night at Hersheypark Stadium.

The state title is Wood’s sixth (2011, 2013, 2014, 2016, 2017, 2019) overall, after the Vikings were knocked out in the state semifinal last year. The defeat ended an historic season for Cheltenham (14-2). The Panthers were making their first appearance in the state finals, and they made it a memorable by being part of a classic.

With :08 left, and the ball sitting at Cheltenham’s 3-yard line, the season for both teams rested on one play.

“The guys had faith in me, they called my name and I had to come through,” said Pigford, who lost to fumbles in the first half of the District 12 championship over Martin Luther King. “We had our doubters this year. I’m happy they believed in me to make this play. I don’t think that I’ll ever forget it.”

The bulk of Wood’s offense came through fellow junior tailback Kaelin Costello. A month ago, Costello was used sporadically. During the state playoff run, that changed. He dashed, and cut and tore through Cheltenham for a career-best 282 yards on 38 carries, averaging 7.4 yards each time he touched the ball.

“I think it’s a matter of believing in your guys, and we did,” said Kyle Adkins, who could be a state record-holder in being the youngest coach at the age of 25 to ever win a PIAA state championship. “It was a process of taking things game-by-game.

“We knew that if we played to our capabilities, we were going to be a tough team to beat. We also have strong senior leaders, and a group of guys who believed in one another.”

That bond was tested.

But the Vikings recaptured their running game.

Riding Costello and missing him in with Pigford, the Vikings had a fourth-and-one at the Panthers’ 20, when Costello broke free on a 17-yard to the Cheltenham 3 with :08 to play.

“We were going for it,” Adkins said. “There was no doubt in my mind, we were playing to win it.”

Four seconds later, Keller found Pigford and the Wood team made history by winning its third 5A state title in the fourth year the PIAA has had the 5A playoffs.

For Cheltenham, it was a hard end.

Panthers’ coach Ryan Nase did an amazing job this season. Cheltenham had never won a district title (it did this season) nor 14 games before this season.

“It’s a little tough to take right now, but we’ll step and realize what we did,” Nase said. “I told my kids how proud I am of them, and I am. I told them if there was a dry eye in here, there’s something wrong, and there wasn’t, because my kids cared about the program and cared about winning.

“We made great steps this year. There is a lot we can look back and be very pleased. It’s just hard right now to think like that.”