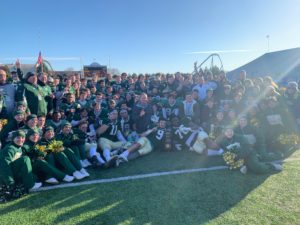 HERSHEY — Dominic DeLuca couldn’t walk. He had to be helped up after taking victory shots. He also sprung what appeared to be a 1,000 leaks. Blood flecks dotted his face. Blood smeared the white No. 9 of his green jersey. Blood covered the tip of his right thumb. Blood was dripping down his right leg.

By the look of the Wyoming Area 6-foot-1, 195-pound senior quarterback Saturday afternoon at Hersheypark Stadium, he was anything but superhuman.

By the impression of everyone and anyone who saw what he did during Wyoming Area’s history-making PIAA Class 5A state championship victory, DeLuca is superhuman.

DeLuca led an amazing fourth-quarter comeback with 21 unanswered points to lead Wyoming Area to a 21-14 victory over Central Valley and win the first-ever state championship for the Warriors (14-1).

DeLuca completed 10 of 16 passes for 202 yards and two touchdowns, while scoring the championship-winning TD on a one-yard score with :41 left to play.

When all appeared lost for Wyoming Area, DeLuca completed 4 of 5 passes in the fourth quarter for 155 yards with an aching right knee, which he hurt midway through the third quarter when he absorbed a helmet to his kneecap. He left for a few plays, then came back—clearly limping, visibly hurting and still playing.

Yet afterward, he had a big smile on his face and memory that will last a lifetime.

“It was worth it, it was all worth it,” said DeLuca, who has three preferred walk-on offers from Penn State, Pitt and UMass. “They (Central Valley) smashed us in the mouth the first three quarters, and I’ll give to them.

“This was out last high school football game, and we were making history here. To be the first-ever to be a state-playoff team from Wyoming Area and be state finalists, that’s what pushed us—it’s what pushed me.”

“I had to push through the pain. I don’t feel it now, but I will feel it tomorrow.”

The play that changed the course of the game came by happenstance.

Senior Riley Rusyn stepped in front a pass that wasn’t intended for him and took it for an 80-yard score with 11:39 left in the game. Until then, Wyoming Valley had gained a mere 79 yards of total offense after three quarters.

From there, the Wyoming Area defense clamped down on Central Valley’s Jaylen Guy, who had rushed for a career-best 166 yards on 30 carries and a second-quarter touchdown. Stephon Hall’s 2-yard scoring run with 9:40 left in the third appeared to seal it, with Wyoming Area’s offense hemorrhaging and DeLuca ailing.

But on the second play of the fourth quarter, DeLuca’s improvisation led to the Rusyn score. Then on successive drives, he found Brian Williams for a 32-yard reception, setting up DeLuca’s four-yard TD toss to Derek Ambrosino with 4:02 to play, followed ion the next drive by DeLuca hitting Williams again. This time for 39 yards, placing the ball at the Central Valley two-yard line inside of a minute to play.

DeLuca put the capper on a star-turning day with a one-yard score.

Central Valley’s desperate attempt to tie it reached the Central Valley 45 and stalled there with :12 left and no timeouts.

“Up 14-0, this is going to sting for a while,” Central Valley coach Mark Lyons admitted. “Up 14-0 in the fourth quarter, I’m not so sure I have words for it right now. This one will hurt for a while, and I know our guys are devastated from it.

“We played well enough, but it’s a four-quarter game. When (DeLuca) got an opportunity, he made the play at the right time. I thought he was down for a while, and he pulled a Willis Reed, came back and pulled off a hell of a performance.

“First of all, I’m proud of our guys. But unfortunately, our guys aren’t going to hear what I have to say. This is going to hurt; this is going to sting. This hurt, when you lose a game like this.”

Between two teams that combined to score an average of 38.3 per game entering the game, they could only manage one TD between them in the first half.

Central Valley took a 7-0 lead into halftime. But it could have been larger. Central Valley started the game in great position, when Amarian Saunders recovered a pooch kick at the Wyoming Valley 30.

For the half, Wyoming held Central Valley to 94 total yards and four first downs.

Wyoming Area had a strong chance to score on its third possession, when a DeLuca pass fell off the fingertips of sophomore Leonardo Haros in the end zone in the second quarter.

If Central Valley’s offense was sputtering over the first two quarters, Wyoming Area’s offense was almost nonexistent. Wyoming Area could only muster up 30 yards of offense, averaging a paltry 1.3 yards a play.

DeLuca was held to 22 yards rushing and six yards passing. Wyoming Area never reached the red zone, while Central Valley converted one of two red zone chances, Guy’s 1-run plunge with 1:25 left in the half, finally putting one of the teams on the scoreboard.

Afterward, as the team began leaving the field, Wyoming Area’s Ambrosino was asked a question: Is Dominic DeLuca human?

“I don’t really know, we still have to figure that out,” Ambrosino said, laughing. “For now, we’ll just call Dom one of the best athletes in the state. We don’t do this without him. It goes to show our grit as a team, and it proves to everyone how close of a bond we have as a team.

“They’ll be talking about this game and Dom for the next 25 years.”

There was one last thing DeLuca had to grab before he left the field Saturday. Sitting there in the middle of Hersheypark Stadium was a gold helmet, chipped and dinged on the side revealing a yellow undercoat.

But it was standing upright—like its owner Dominic DeLuca, who winced when he reached down for it and left the field for the last time.

« Archbishop Wood ends an improbable season with a dramatic 19-15 5A state title win over Cheltenham
St. Joe’s Prep closes out another season as 6A state champs »