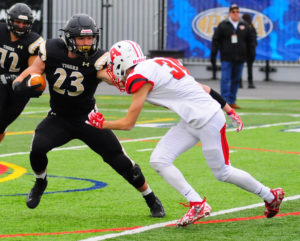 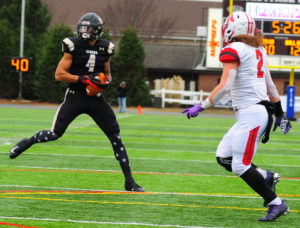 HERSHEY — The game was over before it started. It was done exactly 55 minutes before it started. Initially, the portents flowed in drips, then became more rampant when the Avonworth players began noticing to their right the Southern Columbia team filter out of its locker room at Hersheypark Stadium Friday afternoon.

That’s when it was over.

The Tigers hardly paid attention to Avonworth as they gathered at their end of the field. That’s what a proceeding reputation can do, mixed with overwhelming confidence.

The only thing missing was filling in the final score and by how much—which actually mattered, since Southern Columbia was looking to break its single-season record shared with Terrelle Pryor’s 2007 Jeannette team for most points scored (860) in a season by a Pennsylvania team.

Perfection and records, however, would have to take a few minutes.

Then Southern Columbia responded—with a bazooka.

Southern Columbia’s 74 points was the most scored in a PIAA state championship game (the previous record was previously owned by North Allegheny, which scored 63 in a 4A 2012 63-28 victory over Coatesville). The Tigers’ 67-point difference was the largest margin of victory in state title history.

The victory placed an emphatic exclamation point on a perfect 16-0 Southern Columbia season, and for a senior class that went 63-1 that mercy ruled every team they faced this season.

Avonworth, which was playing in its first PIAA state championship, ended a single-season record breaking year at 15-1. The Antelopes, unfortunately, ran into a team of destiny.

“To us, this was a normal game,” said Southern Columbia defensive back Jake Davis, 5-foot-9, 160-pound junior who had three interceptions in the first half and finished with nine this season. “That drive was a miscommunication. We got our heads in it and just moved on.”

The Tigers’ Cade Linn’s 46-yard interception return, the Tigers’ third-straight pick six, provided the magic 41st point that gave Southern Columbia the single-season state record 861st point with 10:20 left in the half. The Tigers finished the 2019 season with a new state record 894 points, averaging an astounding 55.8 points a game.

Davis had three of the Tigers’ six interceptions—all in the first half. Avonworth turned the ball over six times in the first two quarters (and 9 times overall, with six interceptions and three lost fumbles). Five of the first six turnovers were converted into touchdowns—with three-straight pick-sixes coming from Davis, Linn and Cal Haladay.

“It’s a tribute to them. They made those turnovers happen.

“But we started something good here. This is the deepest run we made and I’m really proud of our kids.”

“The senior’s legacy will live on for a while, and as I mentioned earlier, for us to have such a consistent season that we’ve had, it takes a lot of people and not just the guys that have the big names and so worth,” Southern Columbia coach Jim Roth said. “There are a lot of guys on this team that are outstanding high school football players that go through somewhat unnoticed, because of some of the players that we do have.”

Avonworth came into the game averaging 232 yards rushing a game, but the Tigers held them to 32 by halftime.

“There’s no better way to go out, and it’s been a great ride with great coaches,” Fleming said. “It is definitely bitter sweet. I couldn’t ask for any of a happier ending. There were a lot of tears shed there in the end.”