Thomas Jefferson squeezes by Jersey Shore, 21-14, for its second-straight Class 4A state crown 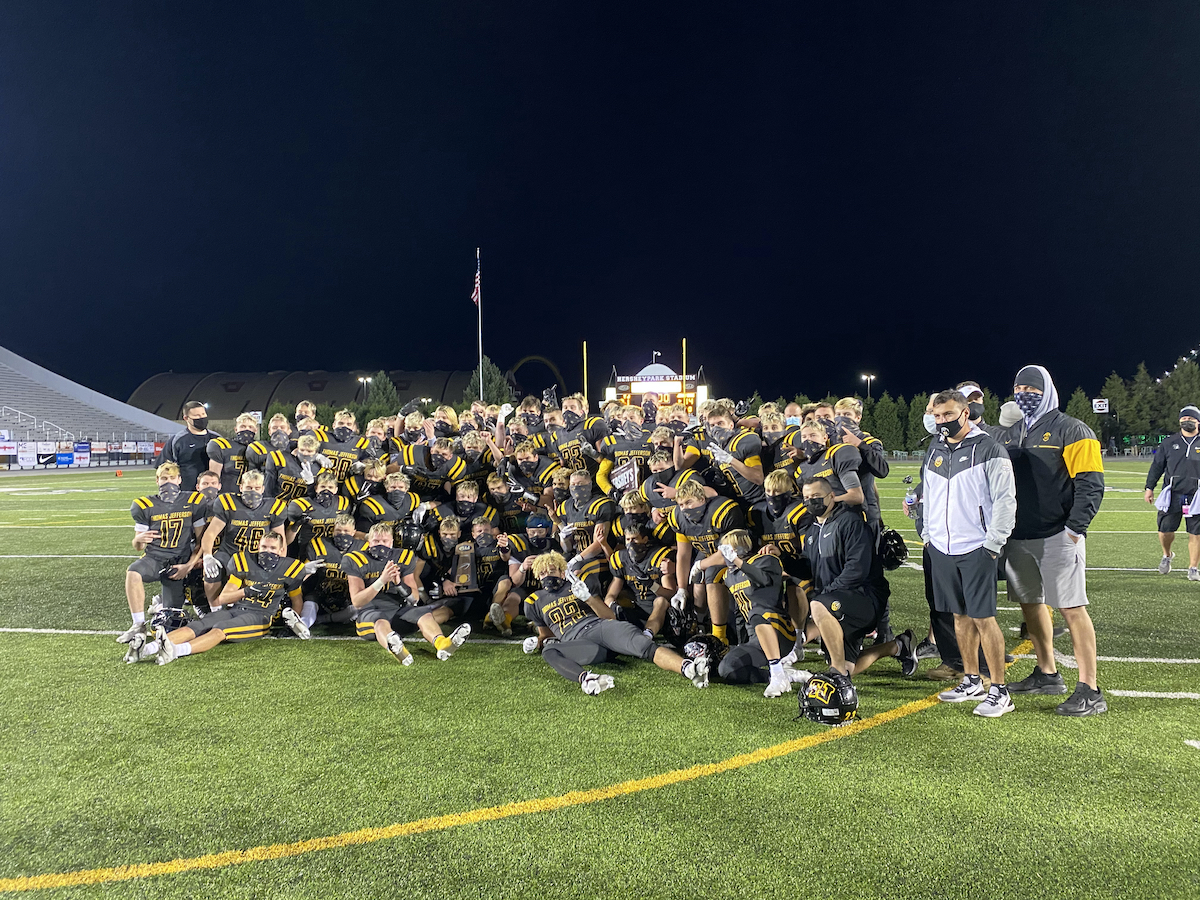 It looked safe. Jersey Shore couldn’t move the ball. The Bulldogs had minus-66 yards rushing. They had 97 yards of total offense, based on their last two drives.

Still, a bolt of fright ripped through Thomas Jefferson Saturday night in the PIAA Class 4A championship at Hersheypark Stadium.

What appeared comfortable for 47 minutes and 39 seconds suddenly appeared scary. Twenty-one seconds later, sitting 21 yards away, the fear vanished in a 21-14 victory for the Jaguars’ second-straight PIAA Class 4A state title.

Junior Conner Murga led the Jags with 114 yards on 24 carries, including a touchdown, but it was his fumble—and his fumble recovery that made the difference.

“I wouldn’t say we were scared,” Murga said. “It’s been one of the greatest games I’ve ever been a part of. The fumble took a toll on me, but I had to forget the last play and I made up for it on defense what I couldn’t do on offense.

“These close games are what I live for. We blew so many teams out that we might have gotten a little relaxed. We made some mistakes, but in the end, we all came together and we won.”

As the final quarter began, Thomas Jefferson appeared in control. Jersey Shore had just 8 yards of offense, and based on 33 plays, the Bulldogs were averaging less than a yard a play (.24). Yet, Jersey Shore was hanging around, thanks to a 51-yard interception return by senior linebacker Dalton Dugan with 2:44 left in the third quarter. Dugan actually gained more on the pick-six than the Bulldogs had in the game at that point (not helped by the Bulldogs’ negative-21 yards of offense in the third quarter).

On the ensuing drive, the Jaguars drove all the way to the Jersey Shore 1-yard line, but another interesting twist occurred, when senior linebacker Gabe Packer forced Murga to fumble and Jersey Shore’s Hayden Packer flopped on the loose ball at the Thomas Jefferson 2.

The opportunity blew up for the Bulldogs.

Risking the game with just under 6 minutes to play, on fourth-and-one at its 11, Bulldogs’ coach Tom Gravish opted to go for it. The plan backfired horribly, when Jersey Shore quarterback Branden Wheary was stuffed at the line of scrimmage and the ball popped free, which was recovered by Murga (making up for the earlier fumble) at the Jersey Shore 4.

One play later, Thomas Jefferson’s DeRon VanBibber bulled into the end zone from the four with 5:48 left to play, resulting in the game-winning score.

Then, it got really interesting.

On the ensuing kickoff, Jersey Shore recovered an onside kick at the Thomas Jefferson 48. Wheary then winged a 27-yard completion to Cayden Hess at the Jags’ 21, giving Jersey Shore a first down with :21 left at the 21.

Four incompletions later and it was over—and the Jags could breathe.

“It was pretty nerve-wracking there in the end, but I knew we could get a stop,” said Thomas Jefferson senior quarterback Jake Pugh, who completed 13 for 29 passes for 179 yards and a touchdown. “Our defense gave up only 7 points all night, and we would like to have won this easier.

“But we have a bunch of characters on the team and this is something that I’ll remember for the rest of my life. I wouldn’t trade it for anything.”

Thomas Jefferson took a 14-0 lead into halftime. The Jags stymied any offense Jersey Shore tried to generate. The Bulldogs’ six first half possessions went like this: loss of downs, punt, punt, punt, punt and punt.

For the half, the Jags had outgained Jersey Shore, 199 to 29, averaging 5.85 yards a play to 1.07. The real telling number came on the ground, where the Jags pushed back Jersey Shore for negative-35 yards.

Thomas Jefferson, however, only led 14-0, on a first-quarter Murga 3-yard run and Preston Zandier’s second-quarter 28-yard TD reception from Pugh.

“Hey, the bottom line is that we won,” Pugh said.