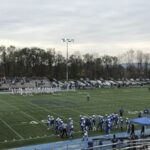 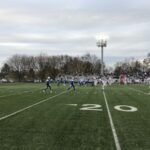 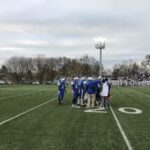 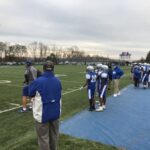 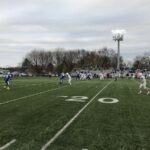 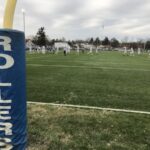 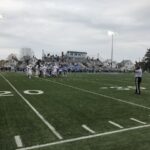 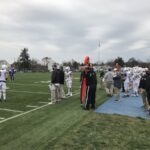 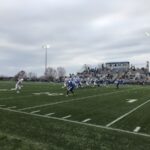 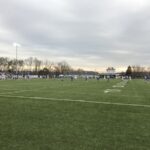 Steelton-Highspire kicker Bryan Hernandez knocked in a 36-yard field goal with 38 seconds remaining and the Steamrollers held off Bishop Guilfoyle 16-14 in a PIAA Class 1A semifinal Saturday afternoon in a cloudy Steelton.

Steelton-Highspire moves on to face Jeannette in the PIAA Class 1A championship Friday at Hersheypark Stadium at 11.

Bishop Guilfoyle had a chance to score again on a drive sparked by a 35-yard strike from quarterback Konner Kiesewetter to Haiden Garner that put them at the 13. The Marauders ended up settling for a 20-yard field goal that was missed with 3:30 left in the first quarter.

The District 3 champion Steamrollers (9-0) put together a drive all the way down to the Marauders’ 14-yard-line until a fumble halted the drive. The Marauders ran out the clock to end the first quarter.

Steel-High defensive back Daivin Pryor made a broke up a deep pass from Kiesewetter to Garner on second-and-17 early in the second quarter and Bishop Guilfoyle was forced to punt.

An illegal procedure penalty gave the Rollers good field position. Odell Greene and Mekhi Flowers picked up chunks of yardage on the ground to put Steel-High in the red zone. The drive was again halted by a turnover as Myrick picked off Alex Erby at the three-yard-line.

A heavy dose of Myrick on the ground and a pass interference call had the Marauders within striking distance with less than 2:00 in the half. Steel-High linebacker Amari Williams halted the drive with a sack on third down and the ensuing fourth-down conversion failed. The Rollers took over at their own 34.

Erby hit Flowers for a 21-yard gain before being picked off by Karson Kiesewetter. Bishop Guilfoyle ended the half with a 7-0 lead.

The third quarter began with punts by each team and a failed fake punt by Bishop Guilfoyle.

On the next drive for Steel-High, Erby completed a seven-yard pass to Flowers to convert a fourth down. Multiple rushes by Greene put the Rollers on the 11-yard-line when the third quarter ended.

Flowers finally pounded in a four-yard touchdown for the Rollers to tie it 7-7 with 11:03 left in the game.

After struggling in the first three quarters with four turnovers and a deficit, Steel-High head coach Andrew Erby knew his team had it in them to come back.

“Being down a touchdown in a football game is nothing compared to some of the things we had to go through mentally and physically this season,” Erby said. “Real life lessons will teach you how to handle those things and gel and lean on each other.”

The Rollers forced a punt on the next drive and took over at their own 17. After a three-yard loss, Flowers made the play of the game. He took a screen from Erby 86 yards to the house to give Steel-High a 13-7 lead with 6:28 left. An unsportsmanlike conduct penalty forced them to go for two, which was unsuccessful.

“I knew we had to get on the board,” Flowers said. “I told my coaches to get the ball in my hands. I’ll do whatever to make it work. I executed the play exactly how I wanted and it resulted in an 86-yard touchdown.”

“He shows up and makes separation,” Steel-High head coach Andrew Erby said. “Today he very well showed that he may be the best player in the state to make a play like that.”

Konner Kiesewetter hit Karson Kiesewetter for a 48-yard gain to the Steel-High 24. Myrick finished the 73-yard drive with a six-yard touchdown run with 3:54 left. Bishop Guilfoyle was back up 14-13.

The Rollers took over at their own 42. Erby converted a crucial fourth-and-six with a seven-yard pass to Tyrone Moore. The drive came down to a fourth-and-12 from the 28 with :52 left. After both teams took timeouts, Erby launched a ball downfield to Flowers. It fell incomplete, but a pass interference was called on Bishop Guilfoyle.

Bryan Hernandez calmly drilled a 36-yard field goal to give Steel-High a 16-14 lead with 38 seconds left.

The Marauders again fought back when Konner Kiesewetter hit Garner for a 45-yard gain to the Steel-High 19. The 36-yard field goal attempt to win the game went wide left with 11 seconds remaining. The Rollers held on.

“It takes a lot of work from our safety plan to our athletic trainer to everybody meeting across the board,” Erby said regarding a season during a pandemic. “It’s been a lot of work and a lot of people who supported these kids so it’s just awesome.”

“We tell our team every day to give maximum effort until the clock hits zero,” Flowers said. “We do that every game. That’s the difference between us and other teams. We fight until the end.”

Now the Steamrollers head to Hershey with a state title on the line.