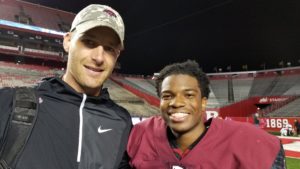 PISCATAWAY, NJ —Tim Roken tucked the ball nonchalantly under his arm and politely shook the hands of all the well-wishers that were coming at him from every direction Friday night at Rutgers’ SHI Stadium.

Not too far away stood Hawks’ junior receiver Malik Cooper, who was smiling and posing for shots with teammates and coaches, basking in this new feeling of being a Friday night hero.

Both Roken and Cooper are in new roles this season, with Roken being the new head coach at St. Joe’s Prep and Cooper playing receiver for the first time.

The guys in their new roles got the Hawks back to an old role, winning.

Thanks to a career-high five catches for 157 yards and two TDs from Cooper and some bold moves from Roken, pulled off an upset in beating St. John’s College. St. John’s is ranked No. 4 nationally by USA Today and MaxPreps, 34-30.

It marked Roken’s first victory as a head coach and introduced Cooper to a host of national scouts that were watching the game.

The Hawks are now 1-1 with another national powerhouse on the slate next week in visiting IMG.

“It was a great team win,” Roken said. “Our coaches and our players obviously had a tough defeat last week in Georgia. But they came back and drew a line in the sand on Monday morning at 6 a.m. They didn’t want to feel that away again.

“You learn by those things. We had our backs against the wall a few tines tonight and we came back and won. This team fights. They fight. These are great programs and to play in this atmosphere is awesome. Our guys buckled down when we needed to. These guys fight.”

Junior defensive back Dave Watson stripped and recovered a fumble by LSU-bound St. John’s receiver Rakim Jarrett, with just over three minutes to play at the Prep 33. From there, the Hawks ran out the clock to preserve the win.

For Cooper, it was a combination of elation, mixed with a little reprieve.

Cooper’s 38-yard TD reception with 1:51 left in the third quarter proved to be the winning points. He also caught a 74-yard TD pass at the start of the game. But what gnawed at him, and what almost backfired on the Hawks, was an option pass Cooper made down field that was intercepted early in the third quarter and Prep up, 24-7.

The Cadets took control and reeled off 20 unanswered points in three minutes, six seconds. The Prep offense struggled to get across midfield.

Cooper, needless to say, was kicking himself after the interception.

“I was kicking myself, but I had to take that off my mind, because that pass was definitely on my mind,” Cooper said. “We beat ourselves against Marietta last week, so we had to retaliate and come back to get that ‘W.’”

Kyle McCord completed 17 of 35 passes for 283 yards and three touchdowns, two to Cooper and one to Marvin Harrison Jr. McCord, like the rest of the Hawks, dealt with a certain level of frustration from the 21-17 season-opening loss to Marietta.

“We learned from it,” McCord said. “This was an emotional win against a great team. That means a lot for us, and it’s the brand of football we like to play. Last week we didn’t live up to the standard, and this week we got back on track.

“Overall, it was the little things, alignment, staying on sides, finishing your job. I’ll admit, I messed up last week. We paid attention to detail and it showed. This showed we’re resilient to come back from behind.”

The Hawks bolted out to a surprising 21-0 first-quarter lead and held a 24-7 advantage at halftime.

By then, McCord had thrown for 195 yards, completing 12 of 25, with two touchdowns and one interception, which led to the Cadets’ lone halftime score.

Jarrett was held to two receptions for a total of 16 yards.

St. Joe’s opened the scoring on its first possession when McCord hit Cooper in stride for a 74-yard touchdown. It was a perfect connection and further proof why numerous major programs liked Ohio State-commit McCord. The ball seemed to wait in the air for Cooper to run under it and take off.

Cooper, meanwhile, had a career-best game by halftime, catching three passes for 113 yards, the bulk of which came on the 74-yard TD.

Prep’s defense, which held the Cadets to 129 yards of offense and four first downs in the half, put the Hawks up 14-0 when a botched handoff was fumbled in the end zone and recovered by Prep’s Blake Romano in the end zone.

The Hawks closed the quarter when McCord hit an open Marvin Harrison Jr. alone in the corner of the end zone with a five-yard TD with 1:06 left in the quarter.

The only mistake the Hawks made in the half when Jamell Overton picked off a McCord pass at the Prep 36. Seven plays later, Cadets’ senior quarterback Sol-Jay Maiava fooled everyone and ran in for a seven-yard score with 8:22 left in the half.

The Hawks replied with a 14-play, 80-yard drive that resulted in an Antonio Chadha 29-yard field goal.

What can’t get lost here is the amazing job St. Joe’s Prep sophomore Keenan Nelson Jr. did on Jarrett, a major talent, throughout the game. The 6-foot, 180-pound defensive back has received college offers. After Friday night’s victory, more will certainly be pouring in.