St. Joe Prep’s offensive line carries the weight in dominating Northeast, 49-6, to head to the PIAA 6A quarterfinals 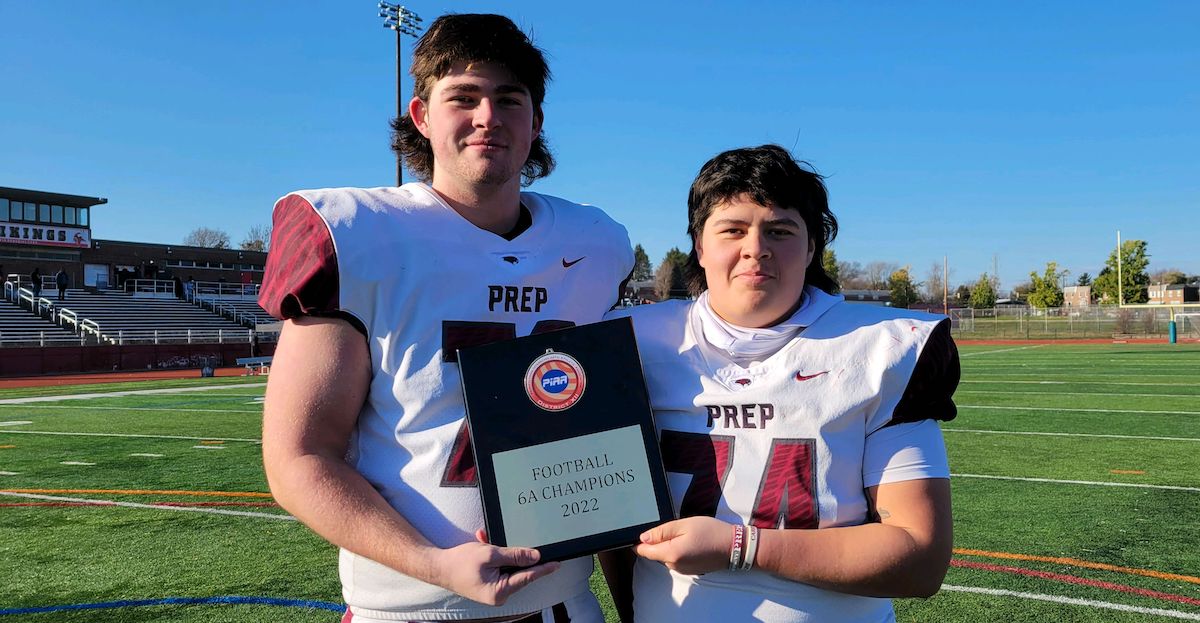 PHILADELPHIA — They don’t mind the obscurity. They embrace it. They know what they’re really doing. They know winning rests on them. It’s always that way with offensive linemen. They’re the ones working in the pits, doing the grinding, selfless work of creating opportunities for their teammates.

So, if St. Joseph Prep is looking to win another PIAA Class 6A state championship, the Hawks will be relying on tackles Joseph McMahon and Kevin Towns guards George Reinhard and Lakeem Steele, center Julian “Pooh Bear” Cervantes, and floating tackle John Paul Schrieder to make it happen.

The Hawks (9-1) will now play Parkland in the state quarterfinals next weekend, while Northeast (8-3) prepares for its annual Thanksgiving Day game against Central.

St. Joe’s Prep scored on its first five possessions and seven of its first eight drives, while the Vikings struggled all afternoon against the stubborn Hawks’ defense.

But everything started up front, as it usually does for the Hawks. Prep got a good push and gave Jones plenty of time to throw.

“I think it’s team chemistry that makes it work,” said Cervantes, a three-year starter who is looking at Fordham to play in college and some PSAC schools. “We work our double-teams and calls, what linebacker to go to, counting the d-linemen, and just over preparing during the week. Our coaches do a good job of preparing us.”

McMahon is a 6-7 tackle who is getting interest from Temple, Maryland, James Madison, and Patriot League schools. The height comes from his mother, Marybeth, who played basketball for Archbishop Carroll and Villanova, and his uncle, Walter Kulp, is a Prep graduate who played football for Virginia.

The Hawks were brilliant—for the most part.

If Prep has a concern, it sometimes comes with a concentration lapse. The Hawks were hit with 10 penalties for 91 yards in the first half and flagged 12 times overall for 106 yards total.

Hawks’ coach Tim Roken, though his team was up 35-6 at the half, was not pleased.

“We need to be good the first four minutes and the last four minutes of the half,” McMahon said. “That’s most important. We try to keep a high standard and keep everyone with us. When everyone is not playing at that standard and playing individually, we don’t play as well.

“Coach Roken was mad we didn’t close the first half—and he was right. We came out in the second half and played our brand of football. We need to play all four quarters We need to sharpen our focus by clearing our minds and moving on to the next play. We sometimes relax.”

Said Cervantes, “Coach Roken stays on us about staying consistent throughout the game and being disciplined throughout each quarter. The biggest thing is we get satisfied. We need to keep our foot on the gas pedal and keep going.”

Entering this season, Roken knew what he had back on the offensive and says much of that has to do with offensive coordinator and offensive line coach Tom Sugden. Reinhard, Steele, and Cervantes each have two years of varsity experience. They’ve been through the December wars. They know what’s ahead.

“Joey has been doing a great job for us at tackle and KJ (Towns) is new this year and is learning the Prep way and he’s really come along, and the offensive line has done a great job of improving every year,” Roken said. “I was not happy at halftime. We need to continue to play to the standard. We can’t worry about anything else that’s going on. It can’t be the scoreboard; it can’t be about the energy in the crowd.

“It’s a football game and we have a job to do and we have to take it seriously. We have to play to a standard. It doesn’t matter where the game is at the time, it’s about developing good habits. As a coaching staff, we can’t allow this group to slip to a lower standard. We can’t allow this group to walk down that path, so they’re going to continue to be held to a high standard.”