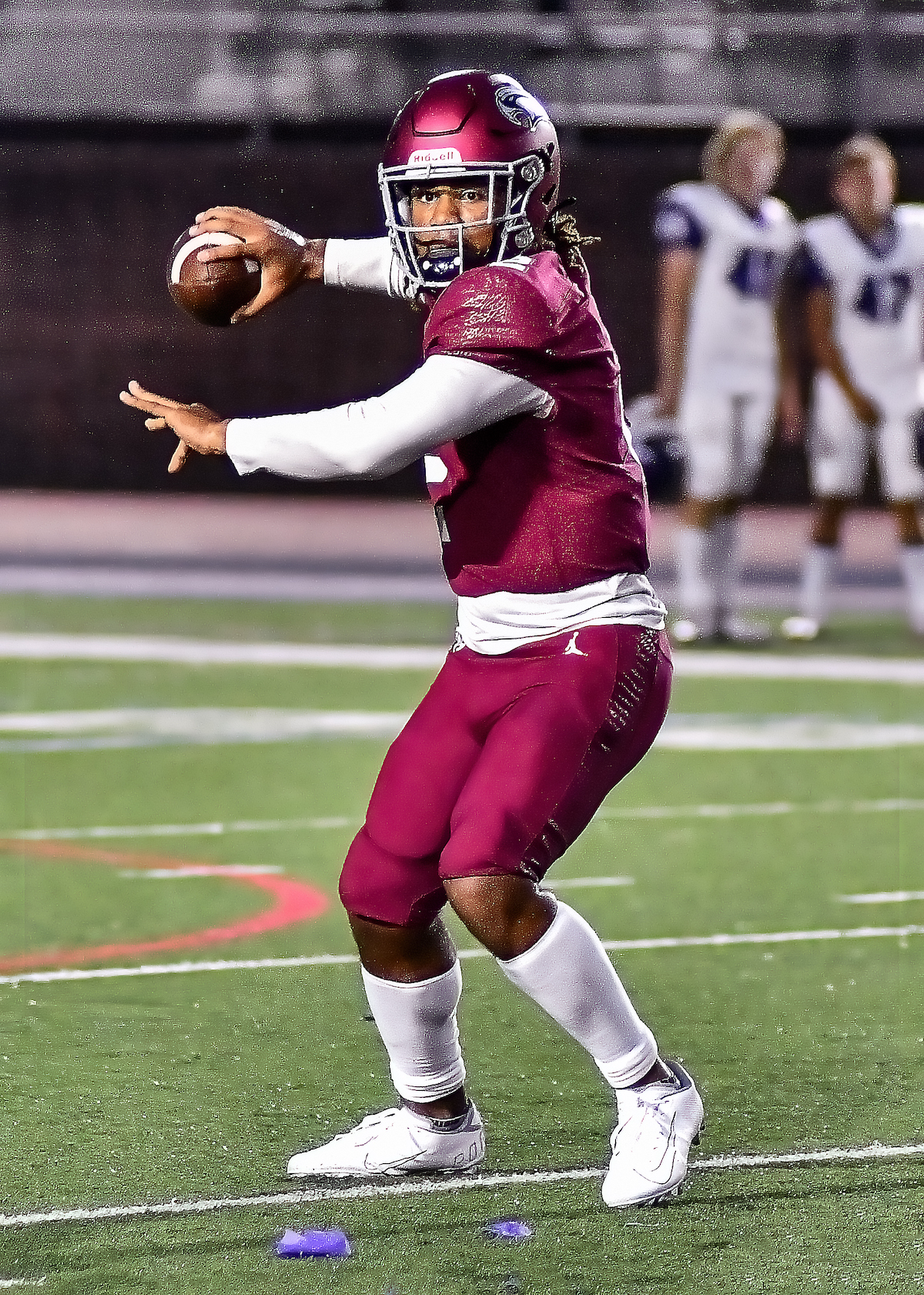 It could have been worse. Much worse. Still, the St. Joseph’s Prep football team doesn’t look at it that way. The Hawks, six-time PIAA large school state champions, never have. They play in the real world to win, with no moral victory barometer attached.

Nationally ranked St. Thomas Aquinas, from Ft. Lauderdale, Florida, looked like it was going to run away and hide from the Hawks on Saturday at Brian Piccolo Stadium under the Hawks’ deluge of blown assignments, missed tackles, and reaching for air too many times.

Despite all of that, Prep was in the game until late in the fourth quarter, when a Raiders’ score sealed a 48-37 victory in the season opener.

Hawks’ junior quarterback Samaj Jones looked brilliant. He ran for two touchdowns and threw for another, turning what had started as a slow day into a serious threat for an Aquinas program ranked No. 5 nationally by MaxPreps and No. 9 by High School Football America.

Regardless of the myriad mistakes, Hawks’ coach Tim Roken was not about to hear how his team stayed with one of the country’s top teams.

The Hawks went down to Ft. Lauderdale to win; not get a tan and wiggle their toes in the sand.

“I’m happy with the way our guys competed,” Roken said. “That’s all we ask of them, to give us a great effort. The scoreboard didn’t end up the way we wanted it to, but you learn by the experience. We’ll go back over as a staff and watch the film, find the mistakes and work on ways to get better.

“But you can’t put a price on experience and how we responded. The adversity was awesome and it wasn’t the way we wanted, but we are happy the way our guys competed.”

This does need to be said: Prep played the game without their top two defensive players, national-level defensive back Omillio Agard, who did not suit up due to a lower-body injury, and West Virginia-bound linebacker Josiah Trotter, who played the first series and was on crutches by the second quarter.

Aquinas scored on its first three drives, resulting in a Jordan Lyle 15-yard run in which he bounced off several Prep defenders to get into the end zone, tight end Tekai Kirby running wide open down the field with a 59-yard TD pass from quarterback Hezekiah “Champ” Harris, and Gemari Sands’ 15-yard TD reception, in which he broke four tackles, including running free from Hawks’ stalwart safety Anthony Sacca with :33 seconds left in the first quarter.

By then, the Raiders held a 21-7 lead, Harris was 6-for-6, for 153 yards passing and two touchdowns, while needing nine plays to score three times.

The Raiders weren’t just open. They were wide open.

Sacca had an interception, forced one fumble, and recovered another. Nilles forced a fumble and was all over the field.

The Hawks wound up forcing three turnovers, which they converted into 17 points, including Jones’ 22-yard TD pass to Brandon Rehmann with 7:18 left in the third quarter giving Prep its only lead of the game, 31-28, outscoring Aquinas 24-7 after being down 14 in the first quarter.

Jones settled down and the Hawks’ coaching staff made great adjustments, taking advantage of Aquinas’ aggressiveness with screens and short passes while running junior Khaseem Phillips through the tackles for large gains and Jones on quarterback draws.

“I think we learned a lesson here, and we’ll see that when we go back and watch the film,” Jones said. “It didn’t start well, starting 21-7. What we practice for is overcoming adversity.”

Jones’ 17-yard, second-quarter scoring run on a quarterback draw up the middle was highlighted by a leaping touchdown in which he hurdled a defender at the goal line (it was SportsCenter Top 10 plays of the day worthy).

On fourth down and what had been a great goal-line stand by the Hawks, Sands finally bulled into the end zone from two yards out with 3:57 left, giving the Raiders a 42-31 lead.

Prep responded with a Jones-to-David Washington 8-yard TD with 2:29 left. From there, Aquinas pounded the clock and finally pinned the Hawks at their eight-yard line with 37 seconds left. The Raiders scored a cosmetic last-second TD when Nick Rodriguez scooped up an errant lateral on the last play for an 18-yard fumble return.

“I think we gained experience from this, playing one of the best teams in the country and giving our guys an opportunity,” Roken said. “We have to go back and watch the film and correct mistakes. What it comes down to is putting our guys in the best position to be successful and we have to finish.”