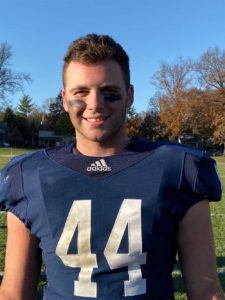 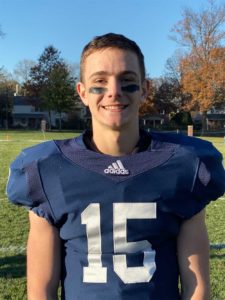 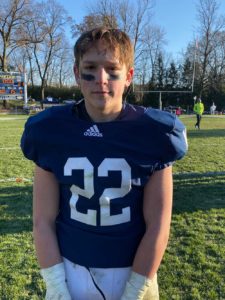 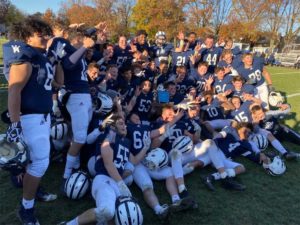 the last three seasons, Wyomissing earned a hard fought 24-21 championship on their home field.  With the District III’s new policy of highest seed hosting the championship game, the #2 seed Raiders had to travel to #1 seed Wyomissing to play for their 4th consecutive championship.  This year, the Spartans had different plans for the outcome and won the eighth District III championship in school history, and first since 2014.

Wyomissing won the coin toss and deferred until the second half.  They then used a pooch kick to surprise Middletown and recovered the ball on the Raiders 45 yard line to start the game.  They drove 31 yards on seven plays and got the first points; a 31-yard field goal from Aidan Cirulli.

After a Raiders punt, the Spartans offense went right back to work.  They ran 17 plays, gained 66 yards, and used 9:23 of game clock to score again when Evan Niedrowski (17 – 109) banged it across from one yard out.  The drive was aided by a defensive penalty that gave them a first down, and by two, fourth-down conversions.  Cirulli’s extra point gave Wyomissing a 10-0 lead with 7:43 to play in the first half.

The next two drives both ended in punts, and Middletown took over on their 40 yard line with 2:58 remaining in the first half.  It only took five plays for them score.  Quarterback Tony Powell (6 of 15 for 160) threw a gem to Jarrod Pugh for 46 yards and the touchdown.  Nolan Sessa’s kick made the score 10-7 at the half.

Wyomissing received the second half kick, but was forced into a three and out punt.  Middletown took possession at their 30 yard line.  They needed only three plays to strike big again.  This time Powell found Chris Joseph for 81 yards and a touchdown.  Sessa’s kick gave the Raiders a 14-10 lead with 9:00 minutes to play in the third quarter, and marked only the second time all season that Wyomissing trailed in a game.  (The first was in week two when Pottsville took a 20-14 lead in overtime.  Wyomissing won that game 21-20).

The Spartans came right back.  Quarterback Jordan Auman (5 of 7 for 118) found Darren Brunner for a 62 yard catch and run touchdown.  Cirulli converted the extra point and gave Wyomissing a 17-14 lead.

Middletown fought like a three-time defending champion should.  They took the next possession on their 21 yard line and held the ball for fourteen plays.  On a first and goal from the five, a touchdown run was taken off the board by a chop block that moved the Raiders back to the twenty yard line.  Two plays later, Wyomissing’s do-everything senior, Max Hurleman intercepted a pass that killed the drive with no points.

On the Spartans first play of the next possession, Niedrowski crashed through the middle and ran 62 yards before being tackled at the Middletown 21 yard line.  Three plays later, Auman and Hurleman connected on a 21-yard pass and score.  Cirulli extended the lead to 24-14 with only twelve seconds remaining in the third quarter.

The Raiders again went back to work offensively.  One play after a Wyomissing personal foul gave the Raiders a first down, Pugh made an incredible diving catch for a 22 yard gain and gave Middletown the ball in Wyomissing territory.  On the drive’s thirteenth play, Jose Lopez (18 – 132) scampered to the endzone from 13 yards out.  Sessa’s extra point cut the lead to 24-21 with 6:44 remaining.

A great kickoff return by Wyomissing’s Amory Thompson gave the Spartans possession at the Middletown 48 yard line.  After five running plays, the Spartans had third and seven at the 27.  However two consecutive incomplete passes turned the ball over on downs, and the Raiders had 3:35 to work with.

Powell handed the ball to Lopez on six straight plays.  On the third play, Lopez galloped 38 yards and was tackled at Wyomissing’s 26 yard line, and the Raiders had a first down with plenty of time on the clock.  Three plays later they faced a fourth and twelve from the 28.  The first pass play of the drive was intercepted by Wyomissing sophomore Tommy Grabowski, and the Spartans took over with 1:16 remaining.

With Middletown having no timeouts, the Spartans were able to run out the clock and secure their championship.

Jordan Auman, a pre-season wide receiver and third string quarterback, discussed taking over as the starting quarterback after week one starter Zach Zechman went down with a season ending injury.  “Everyone has trust more.  We all blended together.  Adding Evan to the backfield really helped us.  I have trust in my receivers and the line blocked well.”

Evan Niedrowski, PIAA champion in the javelin, was asked about his 62-yard run.  “I’ve never run that far before.  Maybe in youth.  A javelin runway is only 30 meters, I think.”

Tommy Grabowski said of his game clinching interception, “It was scary, but the coaches prepare us for that.  Every pregame we practice fourth and long so we’re prepared and everybody does their job.  It felt amazing.”

With the win, the Spartans advance to next Friday’s PIAA quarterfinal game against Tamaqua.  The site of that game has not yet been released. 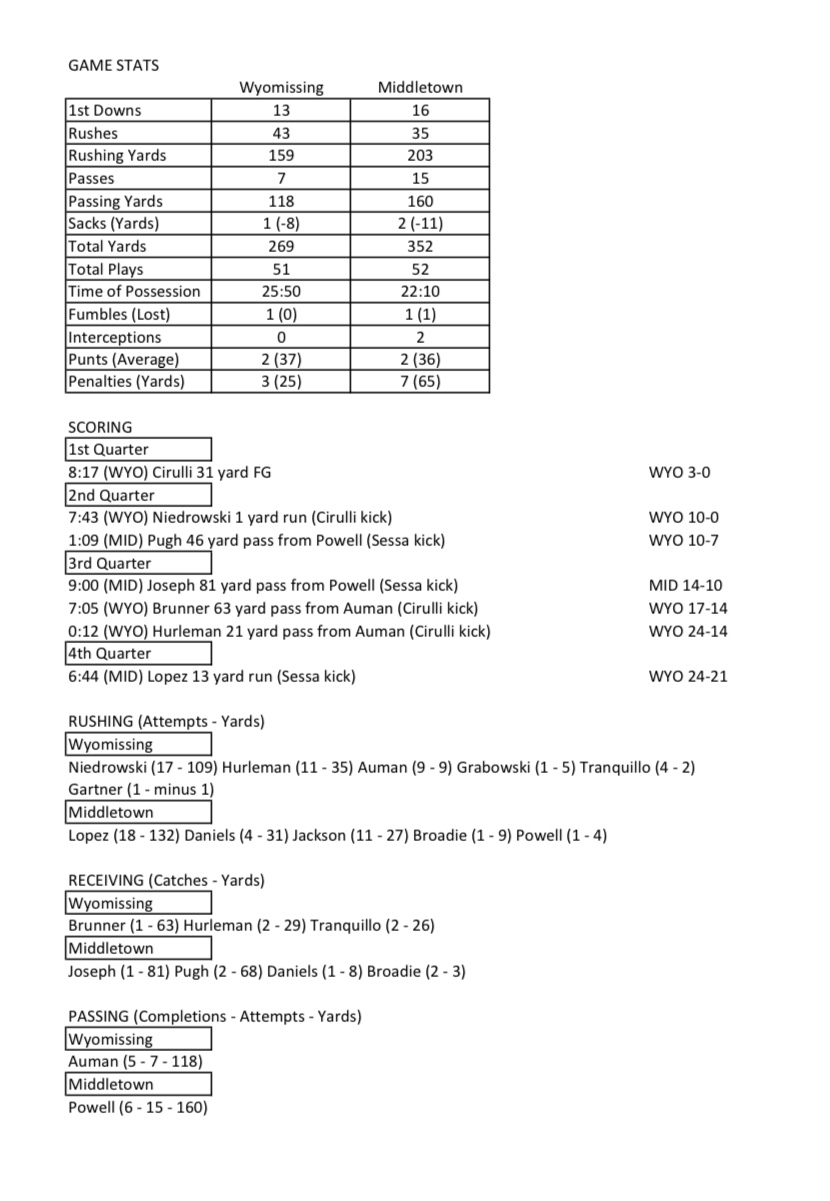