PHILADELPHIA, PA – Cardel Pigford wasn’t about to panic, and neither was 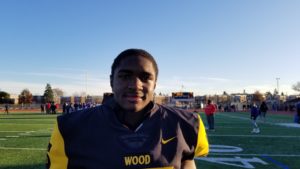 anyone else on the Archbishop Wood sideline Saturday afternoon in the Vikings’ PIAA District 12 5A championship against Martin Luther King.

Pigford, Wood’s explosive junior tailback, was having his issues holding on to the ball, as did the Wood team. The Vikings fumbled away their first two possessions and lost three fumbles in all during the first half.

That, however, didn’t rattle Pigford and the Vikings. After surviving its turnover issues and blown defensive assignments, Wood still managed to easily stomp on the Cougars, 51-14, in the PIAA District 12 5A championship at Northeast High to advance to the PIAA 5A state quarterfinals, where the Vikings will meet Lehigh Valley next weekend.

Pigford finished with a game-high 147 yards rushing and two touchdowns on 20 carries. But the 5-foot-8, 170-pound tailback/defensive back wasn’t in any mood to hear about that. He was still stewing over two first-half fumbles.

“I need to keep my head in the game, and control the ball,” Pigford said. “I could have done better. We tried to lose our heads and stay in the game. Our defense won us this game, because we shut down them down.”

After Wood (8-3) fumbled away its first possession, King’s Tymir Shaw took a handoff and ripped 75 yards for a touchdown on the Cougars’ first play of the game.

Then the hammer came down.

Shaw caught a 10-yard pass on King’s next series, then the Cougars proceeded to go backwards for most of the first half. From midway through the first quarter to 6:22 left in the half, the Cougars went minus-25 yards in total offense, until King quarterback Lamir Kitchens hit Kindred Cooper with a deflected 20-yard pass.

“We have a lot of things that we have to clean up if we want to move forward in the playoffs,” Wood coach Kyle Adkins said. “It was kind of sloppy. I mean, too many turnovers, too many blown assignments defensively. We have to learn from is and we have to clean it up for next week.

“It wasn’t necessarily that we played poorly. It was those handful of plays. We blew two assignments early, but outside of that, those two blown assignments will cost you a game moving forward. It looked like the o-line played okay.”

Wood pounded King for 255 yards rushing, while the Vikings’ defense held King to 51 yards rushing and 88 yards in the air.

“We try to play to a standard here and we came out to a slow start, and did overcome it,” Di Vergilis said. “We’re a real resilient group. That’s one thing this group does well and that’s handle adversity.”