As they walked off the Southern Columbia team bus on Friday morning, they were really hard to miss. Passengers looking down from planes could have spotted Gavin Garcia’s leopard-print suit and Connor Gallagher’s glittering gold disco ball ensemble from miles away.

It kind of personified the Tigers. They’re confident. They look good and they play well. They’re also tough to miss in December. Southern Columbia did what it always seems to do in Hershey in December, and that’s winning another PIAA Class 2A state championship.

“I have four-straight championships and I’m forever grateful for the coaching staff to believe in me as a freshman, and I was small, I mean really small,” Garcia said. “Hey, we’re a group that believes in one another and we’re confident. It’s why we wore the crazy suits coming here. It’s who we are.”

“The last two years we were able to maintain a level of success after losing so much outstanding talent in 2019,” Roth said. “I’ll remember this season was probably the most injuries we’ve experienced in any season. Our numbers are the lowest they’ve been in a long time. We had 38 active players to start this year. For years, we were in the 50s.

“Because of the injuries and lack of numbers, it was a really challenging year, not just in some games because of kids being out with injuries, but in day-to-day practice. When you don’t have big numbers, and some people are injured, you’re kind of struggling to run a scout team and do what you need to do in practice.

“As far as this senior group, they’re as loose and carefree as any that we’ve had. This group comes in and they’re relaxed and loose, but to be honest, I think the game got to us for a little while, where we just weren’t in the flow of games as we had been the last few weeks.”

As the game progressed, Southern Columbia returned to the high level that the Tigers are used to playing.

It looked like the game was over by halftime.

Southern Columbia received a push early. After taking the opening kickoff, Wisloski scored on a 1-yard run with 9:41 left in the first quarter. Serra Catholic (15-2) responded, using short passes to grind its way up the field.

The Eagles tied it at 7-7 when Max Rocco hit Terrell Booth with a 56-yard touchdown pass with 6:51 left in the opening quarter.

That seemed to wake up the Tigers, who answered with consecutive scores. One was Wisloski’s 63-yard touchdown reception from Blake Wise, on a third-and-19 play with 11:05 left in the half, followed by Garcia’s 32-yard TD run with 6:37 remaining the second quarter. A holding call negated Wisloski’s third touchdown, though it didn’t stop the Tigers.

It was Wisloski that made it possible for the Tigers to get that lost TD back, with an interception late in the second quarter, hauling in a deflection. It set up Garcia’s second score, a 5-yard bull rush through the middle of the Serra Catholic offense with :46 left in the half.

It was Garcia’s 40th rushing TD of the season and it gave the Tigers a seemingly commanding 28-7 halftime lead.

By then, Garcia had 106 yards rushing on 13 carries, averaging 8.2 yards a carry. Southern Columbia had outgained the Eagles, 239-99 in total yards, and more importantly, had made Serra Catholic completely one dimensional.

Serra Catholic had minus-48 yards rushing and averaged minus-4.4 a carry.

The Eagles ran off 28 plays in the first half—nine of the 28 were for negative yards.

In the third quarter, the Tigers got a jolt. Southern Columbia had won its previous four state titles by an average of 44.5 points a game. Serra Catholic posed a different threat. The Eagles jammed the line of scrimmage and attacked the gaps, momentarily shutting down the Southern Columbia rushing attack.

Gallagher, a 5-11, 165-pound senior defensive back, came up with a crucial play with 6:17 left in the third quarter when he intercepted a pass at the Southern Columbia four, just when it looked like Serra Catholic was showing signs of life.

On the next possession, Serra Catholic did. The Eagles scored on a 30-yard Rocco-to-Jayvon Holt connection with 2:48 left in the third quarter—on fourth-and-21.

The third quarter featured a number of uncharacteristic Southern Columbia errors. The Tigers had a 31-yard Garcia touchdown run called back for holding, and Serra Catholic responded with a Rocco-to-Zack Weber 80-yard score on a scrambling third-and-10 play with :09 left in the third quarter.

In that third quarter, Southern Columbia was outgained, 117-17, and the Tigers had a total of three touchdowns called back due to penalties during the game.

Garcia’s third touchdown, a 21-yard haul with 6:15 to play, clinched it in a wild fourth quarter that saw six touchdowns scored.

“As time went on, we started to relax and play a high level of football that we’re capable of playing,” Roth said. “You look at Gavin, and he’s one of those guys that we had in the past, that when they were challenged, they made big plays. We’ll miss that moving forward.” 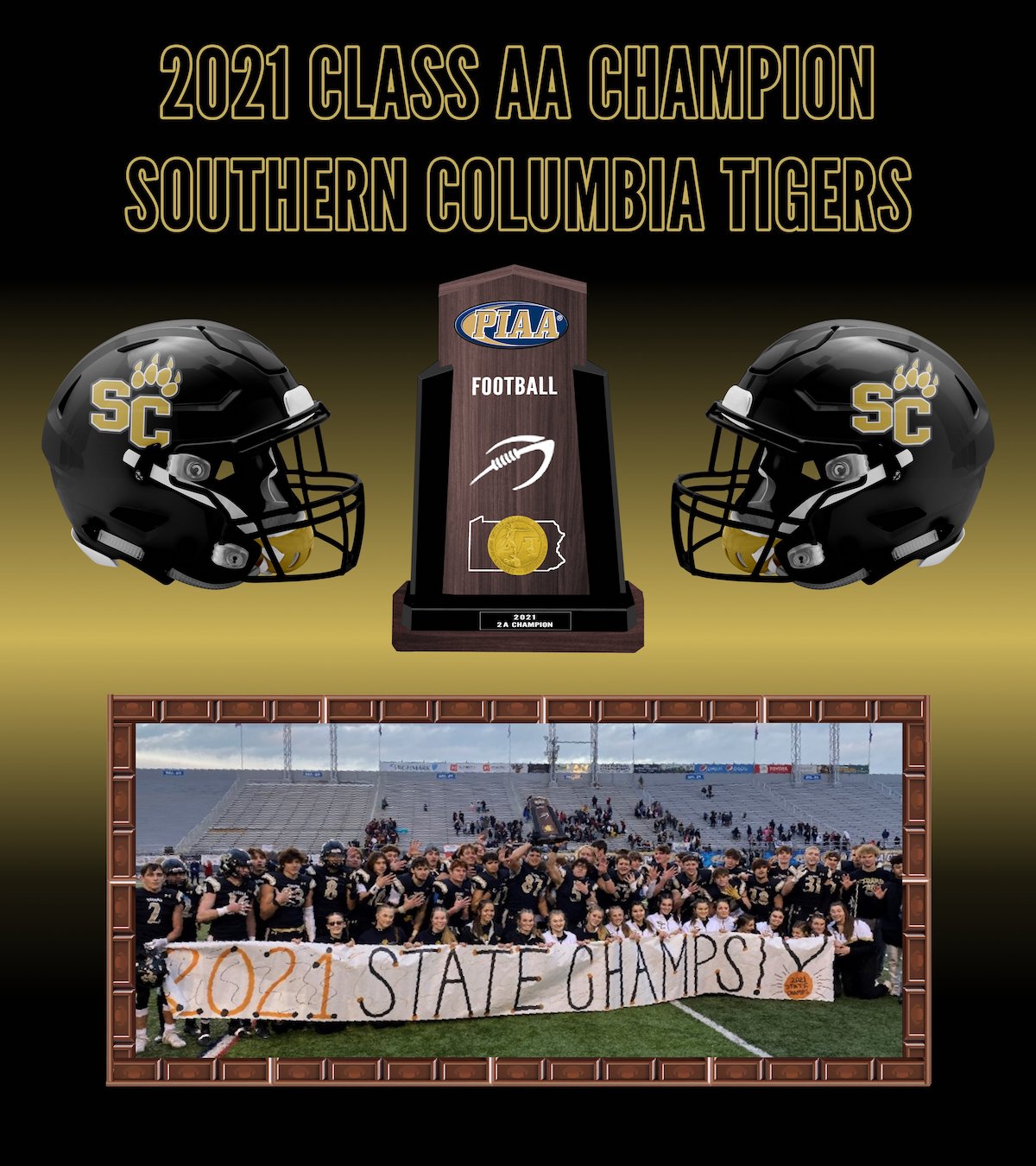