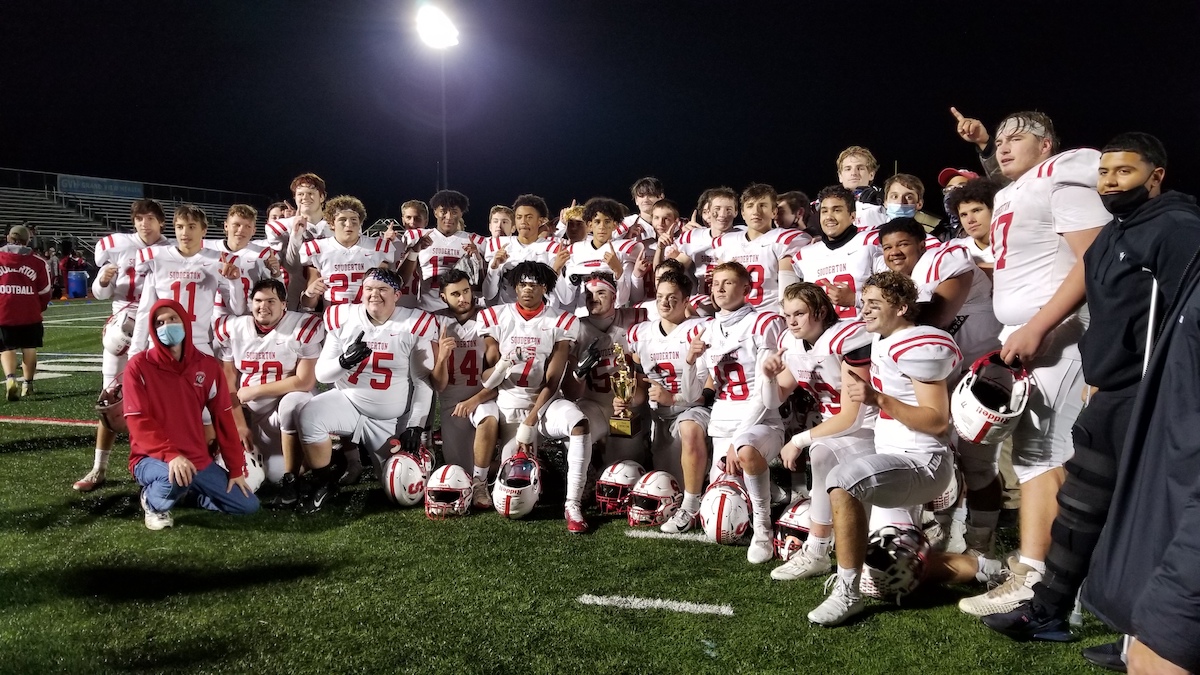 Jalen White wasn’t sure about the history this week, until the Souderton senior and his teammates were on the brink of making history.

No Souderton football team had ever won a PIAA District 1 championship—that is until White and his Indians teammates plowed for 323 yards rushing in a 31-17 victory over neighboring Pennridge to win the PIAA District 1 Class 6A championship for the first time in school history.

The No. 4-seeded Indians (7-0) will now take on two-time defending PIAA 6A state champion St. Joseph’s Prep next Saturday at 12-noon at Cardinal O’Hara in the PIAA 6A state semifinals.

But before the Indians were consumed with that daunting task, they were entitled to celebrate.

White rushed for a game-high 156 yards on 23 carries, including two touchdowns, while the Indians scored on five of their first six possessions. Souderton trailed once, 3-0, and then scored the next 17 points to take control of the game.

“This is a very nice way to go out as a senior, and I wasn’t sure about the history of never winning a district title until this week,” White said. “We knew what we had to do. This senior class during our freshman year said we would leave this program better than we found it.

“There were no mysteries in this game. We usually play Pennridge during the regular season. They’re a good team. But this was for the district championship, and this was a different type of business. We knew they were going to punch us in the gut, and no slow starts.”

Souderton scored on its first three possessions in taking a 17-3 into halftime, and after Villanova-bound Shane Hartzell bolted 47 yards for a TD early in the second half, it looked like a game again.

Ahead 17-10, Souderton methodically banged out an 11-play, 83-yard drive that took up over 4 minutes.

“These kids believed we could do this,” Souderton coach Ed Gallagher said. “It’s been a season of making history. I just feel blessed we could have a season. These kids have been told the last three weeks that we didn’t play anybody, we don’t this, we’re not in the big leagues anymore, we looked pretty good tonight.

“That was a critical drive (after the Hartzell score). Last week we really struggled offensively. We weren’t able to put away Spring-Ford. We came out and really established ourselves offensively.”

Hartzell was held to 68 yards on eight carries, the bulk of which came on the third-quarter TD run.

The first punt of the game didn’t come until there was 4:42 left in the third quarter. Souderton was forced to punt for the first time with 10:30 left to play. By then, the Indians were in command, 31-10.

Pennridge (6-1) has its Thanksgiving Day game against Quakertown, but the Rams and its third-year coach, Cody Muller, achieved a lot this season. Muller deserves a great deal of credit for leading Pennridge to its first district title game in school history.

“They played more physical than we did and that’s what it came down to,” said Muller, a Souderton grad who actually played for Gallagher. “I give coach Gallagher credit. I give their team a ton of credit. If I wasn’t us, I’m happy that it’s coach Gallagher.

“I’m very proud of my kids and this program. Everything we asked our kids to do, they did. I couldn’t be happier for my kids and everything they’ve done this season.”