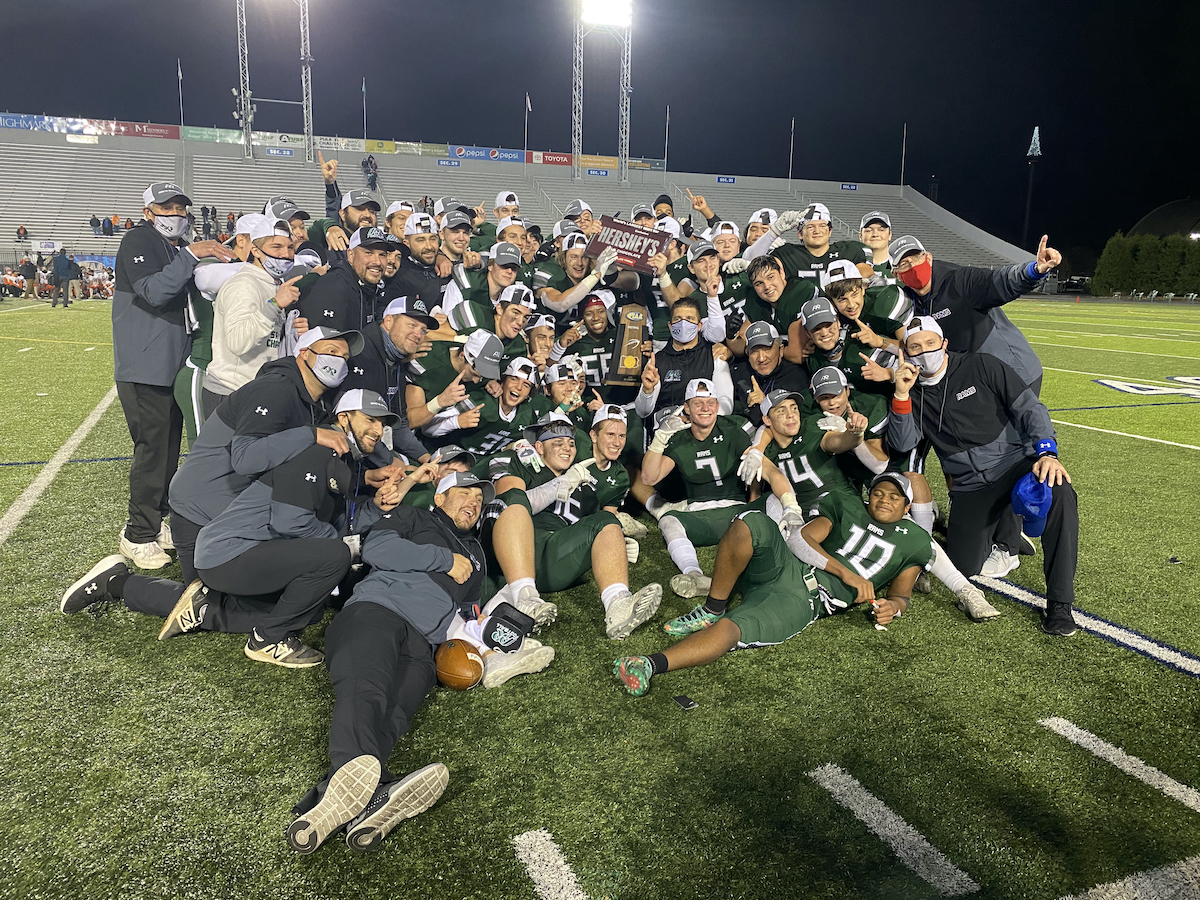 Luke Miller couldn’t help himself. The Pine-Richland senior was running around with blood-shot eyes grabbing and hugging everyone in green he could find.

The Kent State-bound linebacker made a promise to himself four years ago when he was an intense water boy running up and down the sidelines when Pine-Richland won the 2017 PIAA 6A state championship: That his senior year, he would win a state title himself.

He kept his promise.

“The seniors of this team wanted to win a state championship, we made that commitment since we were freshmen,” said Miller, who made a game-high 16 tackles. “I was a freshman in 2017, and I was water boy on that sideline, wanting to win a state championship like those older kids. These guys on this team are all my friends, and we’ve been playing together since we were little. I remember the feeling the seniors had on that 2017 team that they finally did it.

“I can see the same thing in my friend’s eyes.”

Pine-Richland put some distance on what was a comfortable lead when Rams’ quarterback Cole Spencer hit Eli Jochem with a short pass, which Jochem turned into an 86-yard touchdown reception and a 28-7 lead with 8:46 left in the third quarter.

Jochem did make one mistake, when he botched a punt midway through the third quarter, giving Prep some brief life. But Jeremiah Hasley and Miller stopped that with critical stops inside the Pine-Richland five-yard line that stomped out the fire.

While the game was still competitive, Prep was not able to do much offensively. At one point, the Ramblers were averaging 3.7 yards a play to Pine-Richland’s 10.37.

The first big break of the game came when Prep tailback Michael Parks III was jarred free of the ball by Miller at the Prep 26. The Rams’ Jochem was there to jump on it at the 25.

Four plays later, Spencer took off 18 yards into the end zone, on fourth-and-three, putting the Rams up 7-0 with 9:13 left in the first quarter.

After that, Pine-Richland’s offense went stagnant. The Rams punted on their next three possessions, before Rams’ coach Eric Kasperowicz opted to use an up-tempo approach late in the first quarter, which translated in Pine-Richland’s second score, a Hasley 14-yard run with 11:41 left in the half.

The big play of the drive was a 41-yard completion from Spencer to Jochem.

That seemed to jumpstart the Pine-Richland offense. After the Hasley score, the Rams went up 21-0 on Caden Schweiger’s 7-yard rumble up the middle with 7:13 left in the half.

Prep, meanwhile, couldn’t do anything.

By then, Pine-Richland had almost doubled Prep in offensive production (165 yards from scrimmage to Prep’s 87). The Rams were averaging a crazy 10.9 yards per rush, to Prep’s 3.7.

This was Erie Cathedral Prep’s fifth state finals in six years, getting there on a forfeit win over Upper Dublin due to the COVID-19 pandemic. The Ramblers had not played a game in over three weeks, since a 33-7 victory over Hollidaysburg in a first-round state playoff game on Nov. 6.

The Ramblers first five drives were: fumble, punt, punt, punt and punt. Prep broke through on its last possession of the half, when the Ramblers out together a time-consuming 15-play, 74-yard drive that culminated in quarterback Tamar Sample’s 4-yard TD strike to Patrick Fortin with :17 left in the half.

For the game, the Ramblers 12 drives ended in nine punts, a touchdown, a fumble and a loss of downs. Pine-Richland scored on four of its first five second-half possessions.

« Thomas Jefferson squeezes by Jersey Shore, 21-14, for its second-straight Class 4A state crown
St. Joseph Prep makes history by being the first large school in over 20 years to threepeat »