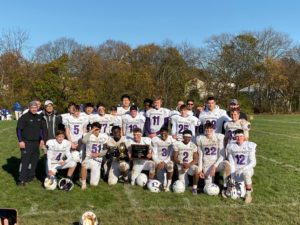 The bus rides were often long, and often solemnly quiet. The Perkiomen School went 1-6 during 2018 in its first year of playing eight-man football. The Panthers played against teams from Connecticut, New York and New Hampshire. It meant 12-hour roundtrip bus rides that weren’t exactly boisterous after losing six of seven games.

It’s why Perkiomen School’s 32-14 victory over Mercersburg Academy on Saturday in the inaugural Keystone State Football League (KSFL) championship had added importance. It meant the Panthers made history in becoming the first Pennsylvania state eight-man football champs—and it made all of the sacrifice and frustration of last season worth it.

The Panthers finished 6-1 this year with a team that has four players from China and one player from Africa on it. And though they’re an eclectic group, almost every player on the Perkiomen School roster has in common of hardly playing any football prior to joining the Panthers’ eight-player squad.

“It was quite grueling last year,” Perkiomen School coach Casey Perlstein remembered. “After 2017, we made the switch to eight-player football. I believe they finished 2017 with 18 players. There were 12 seniors on that team, so when they left, there wasn’t enough players to field an 11-player team.

“The school didn’t want to discontinue football, so they made the move to pioneer eight-player football in Pennsylvania last year. We had 29 players last year and finished this season with 22 players.”

Eight-man football consists of three down linemen on offense, and the field is 120 yards long, the same as a regulation field, but it’s 40 yards wide, as opposed to the regulation 53 1/3-yards width. On defense, you can rush all eight players, though it’s rare and highly risky.

The time frame is the same as regulation high school games, with four 12-minute quarters.

The impetus of the eight-player league came from Perkiomen School headmaster Mark Devey and athletic director Ken Baker. With the crazy travel involved, they started a four-team league this year with Valley Forge Military Academy and Delco Christian, along with Mercersburg and Perkiomen School.

Mercersburg Academy made the switch to eight-man football this season, finishing 5-3.

“You’re still blocking, tackling and scoring touchdowns. The intensity is the same. You just have to switch up some things in how we run, blocking schemes and passing. Defensively, it’s a little harder going from an odd number to an even number of defenders, which isolates players. It emphasizes being in the right spot.

Eight-man football is popping up all over the East Coast and there is good possibility it will grow in Pennsylvania.

Holden is even thinking about pursuing football in college. He played football for the first time last year.

“I always wanted to play,” Holden said. “You can say I became an eight-man football fan. The game is the same as 11-man football. Some people don’t think it’s actual football, but it is the same.

“Eight-man football actually shows what you can do. And I was on the team last year, and what we went through. Because of that, I had a chip on my shoulder. We wanted to come out and win and we didn’t have to take the bus ride this year.”

There were plenty of smiling faces heading back to the Perkiomen School locker room on Saturday.