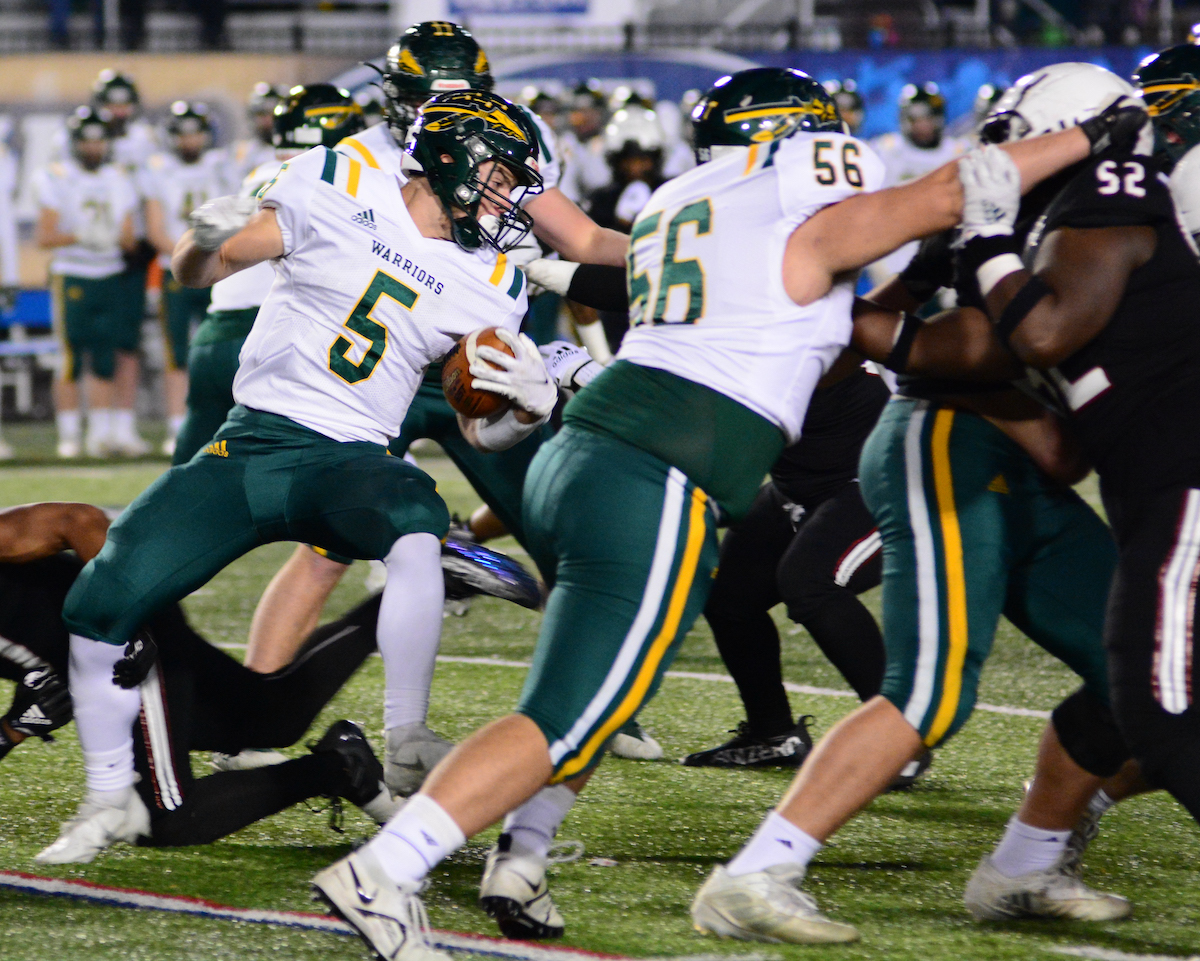 Cade Yacamelli was losing sleep. Carter Green was sitting by himself in an empty parking lot urging his teammates forward. John Ruane was looking at game film and nodding his head, that this could be solved.

In mid-September, Penn-Trafford had lost its second-straight game, sitting at 2-2. Its star player, Yacamelli, was convinced things would eventually click. Its quarterback, Green, was telling his teammates in group chats “never again.” Ruane knew his team was far better than how they were playing.

Turns out that they were all right, when their ideas all merged on Friday night at Hersheypark Stadium, when the Warriors won their first PIAA state football championship, beating mighty Imhotep Charter, 17-14, in the Class 5A title in overtime on a Nate Schlessinger 24-yard field goal.

Yacamelli, bound for Wisconsin, rushed for 100 yards on 21 carries, and scored once, while Imhotep Charter sophomore tailback Tre McLeod pounded away for a game-high 185 yards on 28 carries, and Rahmir Stewart scored both Panther touchdowns, his second came with 7:29 left and seemingly gave Imhotep the game.

No one thought Penn-Trafford (13-2) would get to the state championship—let alone win it.

“We were 2-2 at one point this year, and I remember I came home one day and I was really frustrated, and I was getting no sleep,” Yacamelli recalled. “I knew what we had. It just wasn’t clicking for us. All of a sudden, we went back to practice, I talked to my coaches, I talked to my team, and stuff started clicking. And then some more, and some more. We kept getting better every week.

“This program is also built on being the underdog. Finally, we win something, and finally, people give us credit. They have D-I guys, and people have to start respecting this program and this is my last game, unfortunately, and of course, this is satisfaction and clarity.”

Imhotep went up 14-7 on Stewart’s five-yard run and two-point conversion with 7:29 left to play.

That’s when the Warriors responded with a 12-play, 56-yard drive, ending with Jack Jollie’s two-yard pass reception of Conlan Greene’s jump pass and Schlessinger’s extra point with :34 left in regulation.

Imhotep won the overtime toss and elected to defend. That resulted in Schlessinger’s field goal.

Everything fell apart for Imhotep in overtime. First, the Panthers jumped offsides, which pushed the ball back to the 15 (in high school each team gets the ball at 10 with four downs to score). After a Stewart five-yard run, a high snap placed the ball back at the 26. Imhotep, a team known for its potent ground game, couldn’t move—and the celebration began for Penn-Trafford.

On September 17, Penn-Trafford lost to rival Peters Township, 28-14, under a morass of penalties and mistakes. Monday, September 20 may have been the most important day of the Warriors’ season.

“The Monday after we lost to Peters Township and I said to the coaches on Saturday morning, we’re still good, we just can’t kill ourselves with penalties and turnovers,” Ruane said. “But saves us when those kids came in with an angry attitude and decided to fix it. They wanted to turn the season around. That Monday was eye-opening to all of us. We got on a roll and we haven’t looked back since.”

Imhotep (11-2) finally broke the scoreless tie with a 12-play, 67-yard drive—all on the ground. The Panthers only had to convert two third downs, before Rahmir Stewart scored on a fourth-and-6 when he swept outside untouched for the first score of the game with 3:29 left in the half.

Penn-Trafford responded with an eight-play, 65-yard drive. The big play was the twisting, turning 36-yard run by Yacamelli, placing the Warriors at the Imhotep two-yard line.

As the final seconds of the half were disappearing, Yacamelli plowed into the end zone from two yards out with just :04 left. Schlessinger added the extra point and the early difference.

“Imhotep are monsters but we felt our chemistry together, that was the difference, we believed in each other,” Green said. “I remember after the loss to Peters Township and I remember sitting in the car for 30 minutes that night and I went on a group chat with my team and said ‘never again.’ It helps having Cade.”

For the most part, Imhotep did a good job containing Yacamelli in the first half. The 6-foot, 205-pound senior carried 11 times for 68 yards, averaging 5.8 yards a carry.

Imhotep ruled the time of possession, 39 to 18. The Panthers rushed for 219 yards, but they were also penalized 12 times for 81 yards, many of those flags coming on third-and-short.

“At the end of the day, we had a chance to win, and we didn’t execute,” Imhotep coach Devon Johnson said. “It’s heartbreaking. But I’m proud of my guys. They fought all year. I told my team to walk off this field with their heads held high.”