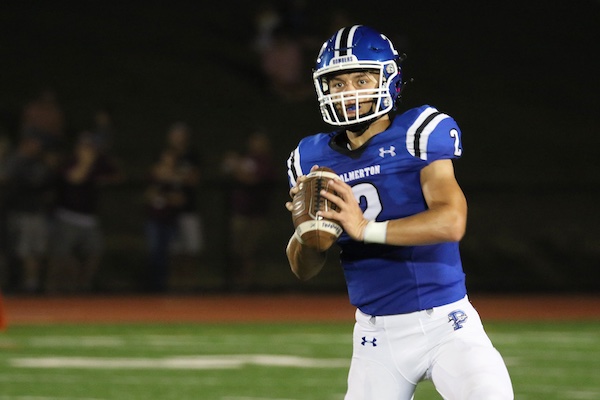 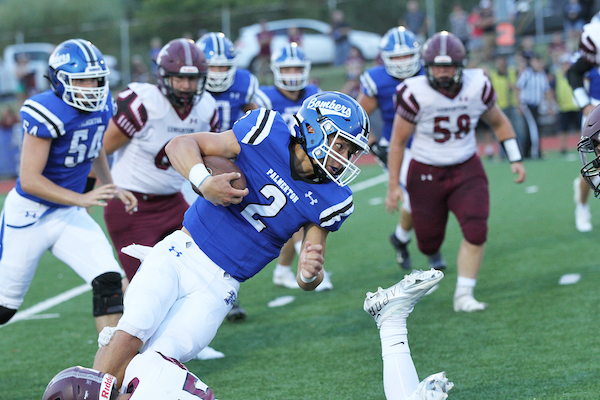 PALMERTON – The combination of Matt Machalik and Kendall Robinson combined for three touchdowns in a 42-29 opening night win Friday night.

Machalik passed for 236 yards and rushed for 112. Robinson finishes the night catching five passes for 99 yards.

On Palmerton’s opening drive, Machalik hit Robinson in the corner of the end zone for the 19-yard touchdown pass. The extra point was good by Samantha Perloni and the Blue Bombers led 7-0 with 5:44 left in the first quarter.

Lehighton answered right back on their second possession. A key play of the drive was on a fourth down and seven conversions on Palmerton’s 22.  Brady O’Donnell hit Ian Rarick for the first down at the ten-yard line. At the end of the first, Palmerton led 7-0.

Lehighton’s AJ Light capped off a drive in the second quarter with a 29-yard field goal. With 11:56 left in the first half, Palmerton led 7-3.

Lehighton punted on their next drive. The Blue Bombers were on the move again. They capped off a four-play, 56-yard drive when Daniel Lucykanish hauled in a 41-yard touchdown pass from Machalik. The score was 21-3 Palmerton.

Robinson intercepted the ball for Palmerton and took it to their 37 with under a minute left in the first half. After a penalty, they started on Lehighton’s 45. After an incredible pass by Machalik and a nice run to Lehighton’s, they faced a third and one with eight seconds on the clock.

For the hat trick, Matt Machalik hit Kendall Robinson for the third time in the half for a ten-yard touchdown pass. With 2:22 remaining in the first half, they led 28-3.

Machalik threw for four touchdowns in the first half.

In the third quarter, Lehighton struck first. Ethan Buchert capped off the drive by outrunning defenders and bowling over another for the four-yard touchdown run. The score was28-10 Palmerton with 3:16 left in the third quarter.

Things started getting interesting. Lehighton’s Mike Yeakel intercepted the tipped pass by Wyatt Sherer. They took over on the 50. But, Palmerton’s defense returned the favor. O’Donnell’s pass was picked off by Lucykanish at their 30.

Lehighton’s Buchert had a big run on the last play of the third quarter. Palmerton headed into the fourth quarter leading 28-10.

There were fireworks across the road and on the field. The fourth quarter was the grand finale. Machalik and O’Donnell put on a show.

O’Donnell ran straight up the middle and finished off the drive. He went in from 12 out. Light’s kick was good and the Indians cut the lead by 11 to 28-17.

This time it was O’Donnell with the answer. He went in from 29 yards out with 8:52 left in the game.

Machalik countered that punch. He got his second rushing touchdown of the half. He powered over defenders from five yards out.