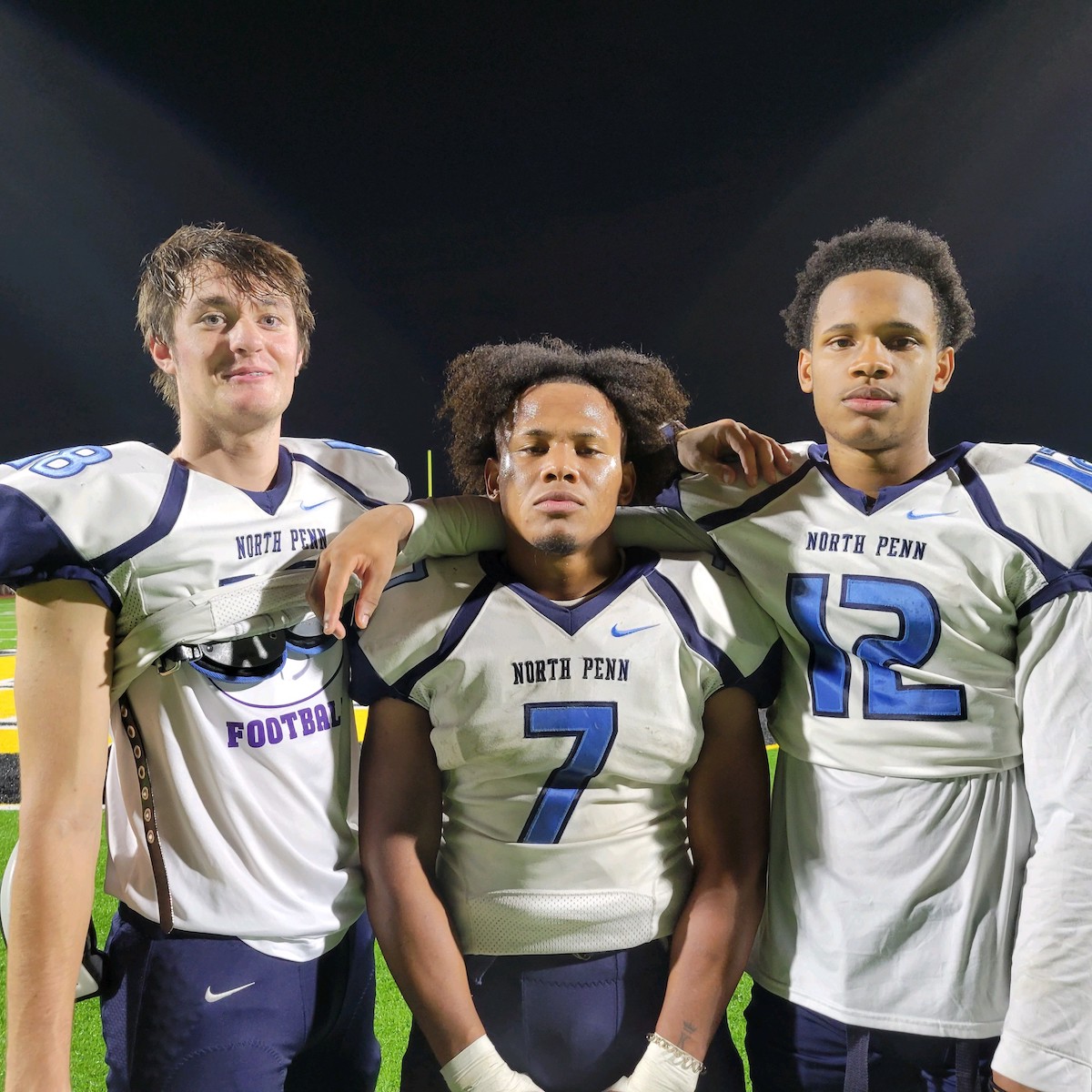 You blink. They score.

And that’s exactly what the Knights are doing this season—rolling over every defense they face.

On Friday night, North Penn’s roll came fast, then it sputtered to a 28-14 victory over stubborn Central Bucks West to remain undefeated at 8-0, while the Bucks saw their six-game winning streak stopped, falling to 6-2.

North Penn senior tailback Khalani Eaton rushed for two touchdowns and a season-high 247 yards on 20 carries, and the Knights exploded early on before hanging on, thanks to a lost CB West fumble in the end zone with 3:38 left to play.

“We started the second half and we had guys wide open down the middle and we dropped it, and we had a guy wide open in the flat, and he drops it, we have to cut down on our mental errors,” North Penn coach Dick Beck said. “I thought our defense really played tough, and our defensive front was great. I think we can be so much better, but CB West is a very good team and this is a win that’s good for us.

“If we win our next two games, we win our league with a chance to finish in the top two of the (PIAA District 1 Class 6A).”

But to get far, the Knights still need some tightening—and they know it.

North Penn looked like it could drop 60 anytime on anyone. But on Friday night, the machine stopped in the second half.

“It’s mental errors and we do it to ourselves, and the only people who beat us is ourselves,” Eaton said. “We’ll go over it in practice and get better.”

The game seemed over by halftime.

By then, Eaton rushed for 205 yards on just 10 carries—including touchdown runs of 35 and 94 yards. The Knights had built a 28-8 lead scoring on four successive drives. In one span, North Penn scored three touchdowns on four plays over a 5-minute, 38-second span.

The most intriguing score of the game—and maybe the season—was Eaton’s 94-yard TD run. He might have been caught and pulled down at least six times, but he kept churning his legs, as CB West defenders concentrated more on slapping at the ball than trying to tackle him.

The scoring run came almost in slow motion. As Eaton reached the North Penn 32, seeming trapped against the sideline with five Bucks’ defenders around him when he finally broke free from the group and went untouched the remaining 68 yards.

The Knight struck first through the air on a pair of Zeltt-to-Carroll scoring passes.

On the last play of the first quarter, Zeltt arced a 40-yard rainbow to Carroll for a 7-0 Knights’ lead. On the next possession, Zeltt lofted another rainmaker to Carroll for a 43-yard score. CB West seemingly couldn’t do anything to defend it.

“We came out with the win and that’s all that really matters,” Carroll said. “We have to lock-in. Always after halftime, something happens, we get tired. Everyone has to work harder in practice. We’re capable of doing more. I think we can we can far.”

The Bucks’ initial score came on a 4-yard TD run from Donte Mancini and a two-point conversion pass from Austin Hahn to Jeremy Goldrick with 1:52 left in the half. That’s when North Penn answered back with the Eaton 94-yard TD run.

Midway through the fourth quarter, the Bucks were driving again, after an Eli Boehm 11-yard TD run with 11:25 left. There were roughly four minutes remaining and CB West had the ball in the Red Zone when a costly fumble into the end zone ended the drive and the Bucks’ chances at a comeback.

“They’re very explosive and North Penn can hurt you in multiple ways. You can’t duplicate their speed in practice, and to start the game their speed overwhelmed us a little bit,” Bucks’ coach Rob Rowan said. “They’re a very good football team that executes really well, and when you have the athletes that they do, it can be difficult to stop.

“Once our guys settled down, we were okay in the second half. It was unfortunate we fumbled there in the end, and if we scored, we’re looking at 28-21 and now it’s a ball game. They were getting tired.”