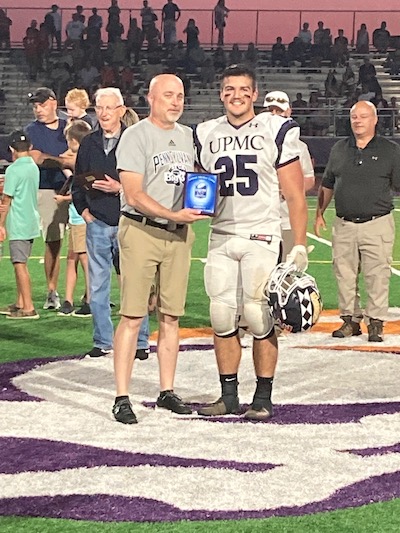 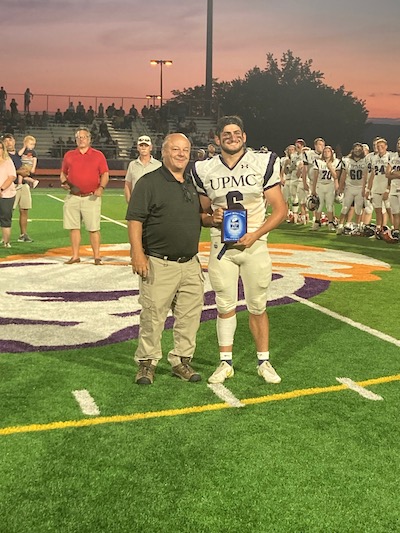 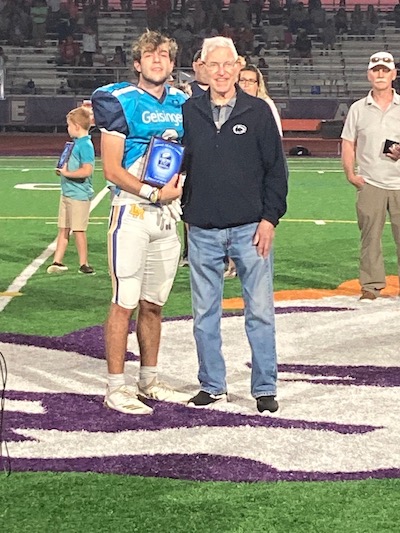 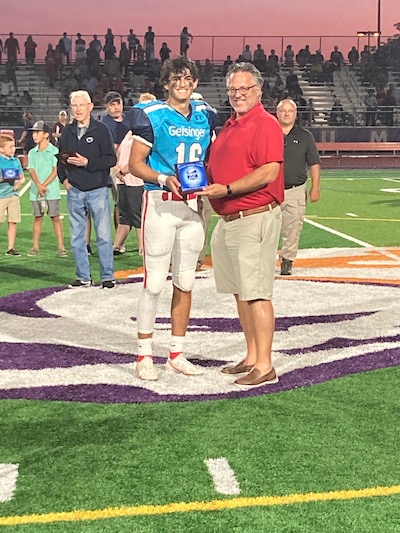 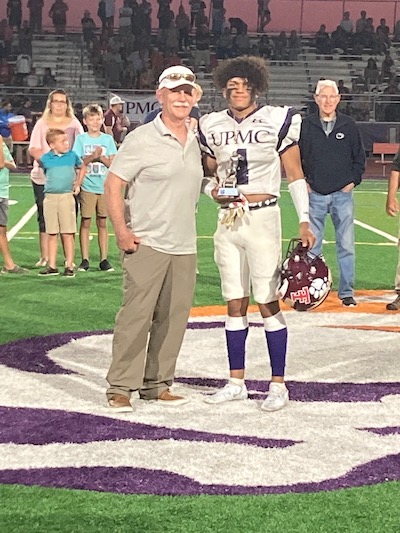 Player of the Game Naz Smith of Loyalsock

DANVILLE – Back in November, while playing in a Class A state quarterfinal at Danville’s Ironmen Stadium, the Canton Warriors forced six turnovers, including two blocked punts in the fourth quarter, to rally from a two-touchdown deficit and earn a thrilling overtime comeback win over Old Forge to advance to the state semifinals.

On Friday night on the same field, another Canton Warrior made a big defensive play, and although the stakes weren’t nearly as big this time around, it once again spurred his team to a win.

Defensive lineman Caiden Williams picked off a pass behind the line of scrimmage and returned it 16 yards for a touchdown in the first quarter. The play was the highlight of a standout defensive performance by the North team, which defeated the South 36-0 in the District 4 Football Coaches Association Senior All-Star Game.

“Our defensive tackles and defensive ends were just unbelievable with their size and strength,” said Canton coach Tyler Sechrist, who coached the North squad. “They controlled the game. You can’t really do too much in these (all-star) games defensively. It’s pretty vanilla – you have to play man, you can’t cross your down linemen, you can’t stunt linebackers. Our guys just overpowered them and were stronger and faster.”

Friday’s contest marked the return of the annual all-star game for senior football players in District 4 after a two-year hiatus due to COVID-19. It also marked a new site and sponsorship of the game. For several years, the game was organized and sponsored by the South Williamsport Lions Club and held at South Williamsport. But after the hiatus, the Lions club bowed out, and thanks to the generous sponsorship of UPMC, Geisinger, and Gannon Insurance Associates, the game was able to return in 2022 with a new host site in Danville.

And the North team made it a memorable one with its defensive performance. Playing against an offensive backfield that featured quarterback Pedro Feliciano, running back Julien Stellar, and fullback Thomas Davitt of Mount Carmel, who were all major parts of a Red Tornado offense that broke the school record for rushing yards in a season last fall, the North defense held South’s offense to just four rushing yards and 85 total offensive yards. The South wasn’t able to get a first down until the fourth quarter and finished with just two compared to 16 for the North.

The North’s front seven was stout for the entire game, only allowing one rushing play of more than 10 yards in the game. For the most part, it featured a rotation that included Williams along with Avery Campbell, Sebastian Robinson and Dade Splain of Williamsport, Karter Peacock and Conner Davis of Jersey Shore, Jake Casella of South Williamsport, Bailey Hadzinikolov of Muncy, who earned the North’s defensive MVP award, Gaven Sexauer of North Penn-Mansfield, and Michael Sipps and Kade Sottolano of Cowanesque Valley.

Williams’ interception return for a touchdown in the first quarter came between three straight offensive touchdowns scored by the North, which made it a 29-0 game going into halftime.

The North’s first touchdown was also set up by a turnover, as Aidan Herb of Line Mountain muffed a punt late in the first half, which was recovered by Jersey Shore’s Karter Peacock at the South 3. One play later, Rocco Pulizzi of Montoursville, ran it in from three yards to make it 8-0 after a two-point conversion that resulted from a fumbled snap on the PAT, but Maddix Dalena of Montoursville found Bailey Hadzinikolov of Muncy for the two points.

After Williams made it 15-0 with his interception on the first play of the South’s ensuing possession, South punted again on its next drive. This time, Montgomery’s Logan Almeida led the North down the field, completing two long passes to Loyalsock’s Naz Smith, one for 36 yards and another for a 35-yard touchdown pass. Smith earned the Player of the Game honor after finishing with 112 all-purpose yards, including 81 receiving and a touchdown.

The North made it a 29-0 score on its next drive midway through the second quarter, as Dalena, who will be attending Connecticut to play baseball next year, led the team down the field from under center on a 58-yard drive capped by a one-yard touchdown by Cam Fabian of North Penn-Mansfield, who finished with 31 yards on 10 carries.

After halftime, it was once again Dalena under center as the North again marched down the field, this time on an 11-play, 69-yard drive capped by a one-yard run by Dalena to make it 36-0.

For the game, the North’s three quarterbacks – Dalena, Almeida, and Frankie Morrone of Williamsport, combined to complete 10-of-17 passes for 137 yards.

“I was impressed with all of the quarterbacks,” said Sechrist. “Maddix has a really strong arm. They’re all good, and it was a lot of fun to be a part of.”