No longer a secret, Lakeland’s Lacota Dippre is climbing out of older brother CJ’s shadows 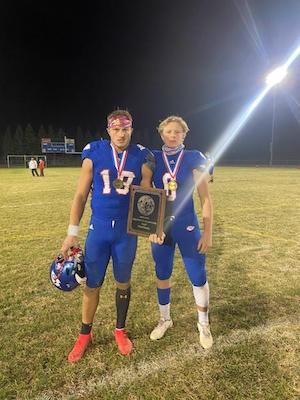 Lacota Dippre’s challenges as a first-year varsity player came rather emphatically last season—with caring bumps and bruises. He had constant eyes on him. Lacota’s older brother, CJ, would walk over to Lakeland Chiefs’ head coach David Piwowarczyk and say on the side “Coach, let’s run stretch again, I want to run at my brother and smash him in the face.”

Lacota got knocked down plenty, but something began to emerge. He got back up every time CJ, now a 6-foot-5, 265-pound tight end who will play as a true freshman at Maryland, would bowl him over. More than a few times, Lacota actually got the better of his big brother.

Lacota’s confidence grew. His skill set galvanized. He began to get a picture of his potential and framing it was the very person who was knocking him down and helping him back up again.

Lacota, now a 6-3, 235-pound junior defensive end and tight end, is on the radars of Maryland, UConn, and Pitt. It’s a list that promises to swell as Lacota, who wears a size 13 shoe, grows.

Led by CJ, the Chiefs finished 5-1 in the COVID-19 truncated 2020 season and won the District 2 Class 3A championship for the first time since 2006. CJ has now handed the Lakeland keys over to little brother Lacota. And instead of running from his older brother’s considerable shadow, Lacota is willing to confront it and even conquer it.

“I know there will always be the comparisons with CJ. I got on the grind this offseason and my friends will just be joking around, ‘There’s CJ Dipree’s brother,’ to get on my nerves. You know how kids get. That gets me motivated to get out of his shadow.

“I want to create my own identity and I think CJ would want me to be better, too. CJ would always tell me before practice that he was going to ‘be on me’ and that we aren’t taking it home.”

Lacota, who plays basketball for Lakeland and was the District 2 Class 3A discus champion last spring, used to be that pesky, annoying little brother always tagging around CJ. Lacota laughs at the memory of CJ and their cousin, who both were considerably larger than him at the time, running around after him playing football in the yard.

A foundation began to build. Lacota thought, “If I could take whatever CJ brings, I could take it from anyone.” By the time Lacota reached high school, there was nothing that was going to intimidate him—not even CJ.

“It was really neat having the two of them together last year because CJ was the natural leader of our team and we played as he played and Lacota was trying to do better, or just as good as CJ did,” said David Piwowarczyk, 38, in his third season as Lakeland’s head coach. “CJ really pushed Lacota. It was a really good dynamic. It wasn’t always CJ winning. Lacota was strong enough and athletic enough to get the best of CJ at times. They were always going at it. CJ would run Lacota over and Lacota would always get back up and say, ‘That’s all you got.’ CJ benefitted, too. Lacota made CJ work.

“They really helped each other. Lacota has the talent to definitely play at the next level. This will be Lacota’s chance to create his own identity and that’s what we plan to do this year offensively and defensively. Lacota is a vocal leader. The kids gravitate to him. It’s why they voted him captain as a junior. He’s a very outgoing kid in the locker room. Last week we had freshman karaoke and he was in there dancing with them. It’s not something he would have done last year.”

After winning its first district title in 14 years, Lakeland suffered a 47-0 loss to Wyomissing Area in the opening round of the PIAA Class 3A state playoffs last season. It’s still fresh to the 2021 Lakeland starters. The Chiefs return six starters on defense and five starters on offense, not including Lacota, who won’t come off the field in 2021, starting at defensive end, tight end, possibly be the team’s long snapper or punter.

“I’m really excited about this year,” Lacota said. “We’re looking good in practices and this is the best bonded team that I’ve ever been on in my life. There’s pressure repeating, but I want that. I can’t wait. I’m definitely ready. CJ taught me everything. He showed me what to do, and where I had to go. He had a winning mindset. Even now, he FaceTimes me. He’s still on me.”

CJ will always be the big brother.

Now it’s Lacota’s turn to be the big brother to the Chiefs.

He has a good teacher.