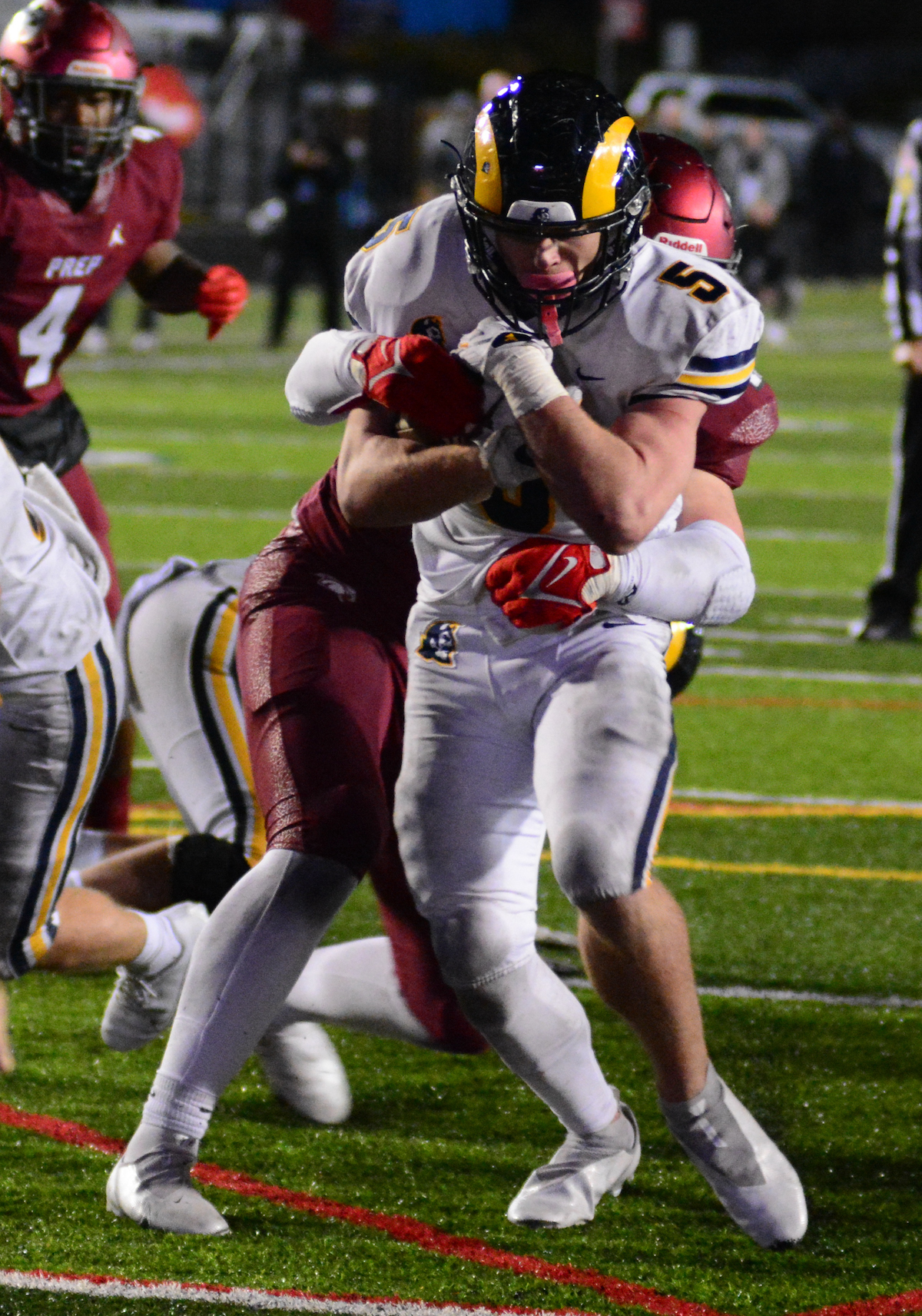 Mt. Lebanon coach Bob Palko had the game ball tucked under his arm, and looked back over his shoulder at his victorious team Saturday night at Hersheypark Stadium, after the Blue Devils’ historic 35-17 PIAA Class 6A victory over traditional powerhouse St. Joseph’s Prep.

“The belief, you look around and you see how many times St. Joe’s has been here, and it was believing we could play with them,” Palko said. “You go talent-for-talent, maybe we don’t, but with a group of kids together that believe in each other, it’s beautiful and we did it.”

The Blue Devils did.

They finished their best season in school history by winning their first state title by going 15-0, while ending St. Joe Prep’s reign as three-time state champions.

Mt. Lebanon did it with a solid ground attack, mixed with the smart decisions made by senior quarterback Joey Daniels.

Alex Tecza clinched the victory for Mt. Lebanon with a 2-yard run with 4:46 left to play, which put the Blue Devils up, 28-17, and then added another score for good measure.

“Prep is very physical and they have a lot of athletes on that team, and I think we started to believe we could do this and we had a lot of doubters,” Daniels said. “The hardest thing for us was ignoring all of the outside noise and getting it done, which we did.”

After a great start, Prep found itself in a hole. Mt. Lebanon scored on three of its first four possessions.

The Hawks gave up two Mt. Lebanon touchdowns on two of the Blue Devils’ first three plays. Initially, Mt. Lebanon’s Mike Beiersdorf took a slant pass from Daniels for 86 yards for a touchdown with 6:54 left in the opening quarter.

Then, Eli Heidenreich ran 13 yards untouched for a 14-7 Blue Devils’ lead with 6:11 left in the first quarter—amounting to two touchdowns in 43 seconds. Prep didn’t allow that in an entire game against Garnet Valley in the state semifinal game.

Mt. Lebanon’s two scores came in response to a Josiah Trotter 4-yard touchdown reception from Samaj Jones on the Hawks’ first drive of the game. Prep took the opening kickoff 74 yards over 10 plays that took 4:48.

On the first play of the second quarter, the Hawks suffered a major defensive breakdown when Daniels spotted a wide-open Jack Smith for just his fifth catch of the year—for 45 yards and it came on third-and-six at the Blue Devils’ 6.

Three plays later, Daniels hit a wide-open Tecza for a 6-yard TD with 10:15 left in the second quarter and a 21-7 Blue Devils lead.

The Hawks answered when Jones directed a 10-play, 65-yard drive that ended with him barreling in from four yards out to pull Prep within 21-14 with 6:03 left in the half.

A huge sequence came in the closing seconds of the half when the Hawks were pressing for the tying score. Jones was stopped at the Mt. Lebanon 2 with less than :10 remaining, forcing St. Joe’s to try a 20-yard field goal that sailed wide left, with the Blue Devils going into the intermission up, 21-14.

The Blue Devils’ Matthew Wertz played a major role, picking off a deflected pass in the third quarter, then grabbed another Jones pass with 6:32 left in the quarter, thwarting another Hawks’ drive.

“We thought we had to take their quarterback out of the game, and I think we did a pretty good job of it,” Palko said. “Our defense played really well. Offensively, we did some things formation-wise to put those guys in binds and we were fortunate.” 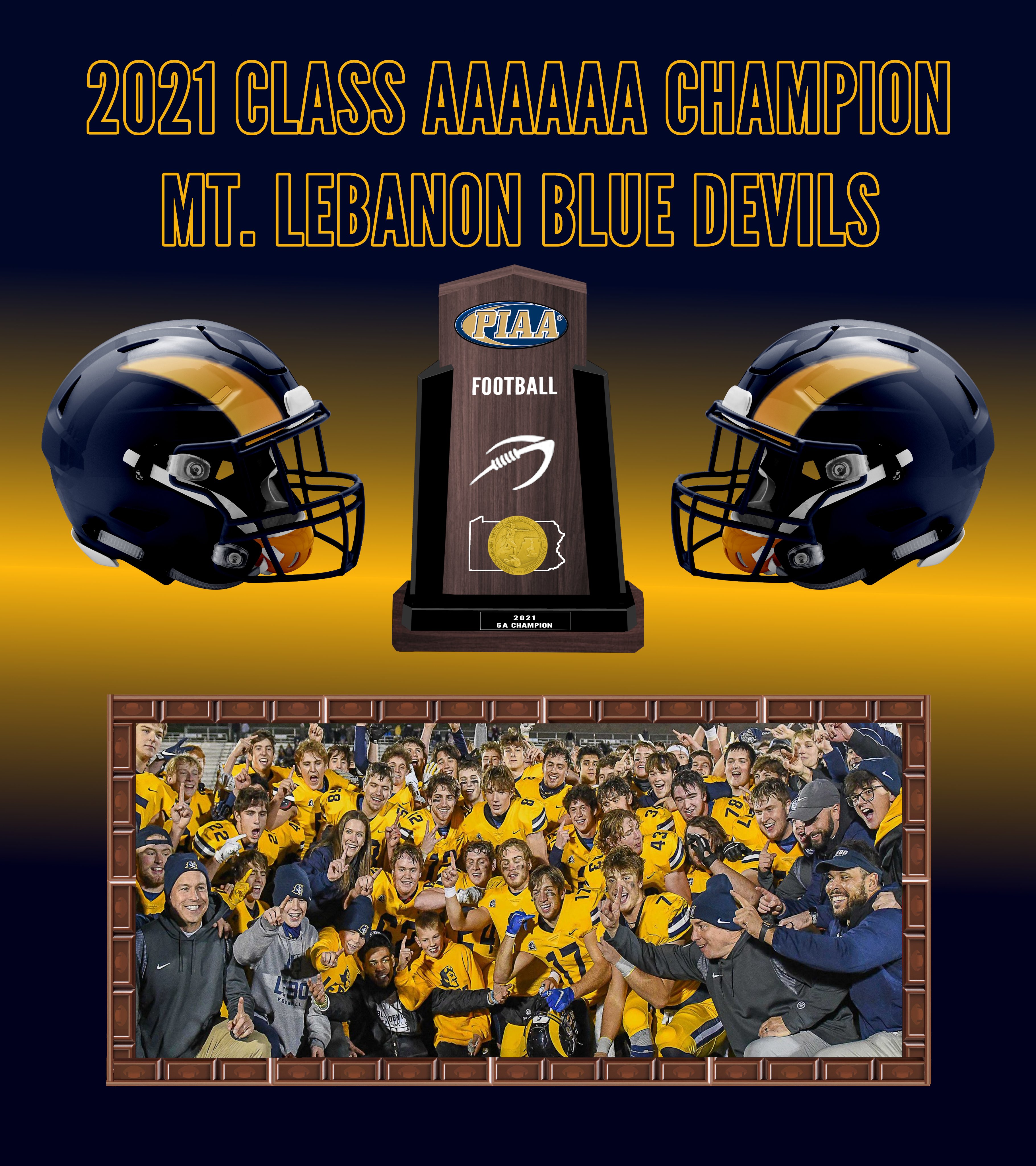