Mason Ellingsworth Continues To Be An Inspiration Through Tragedy 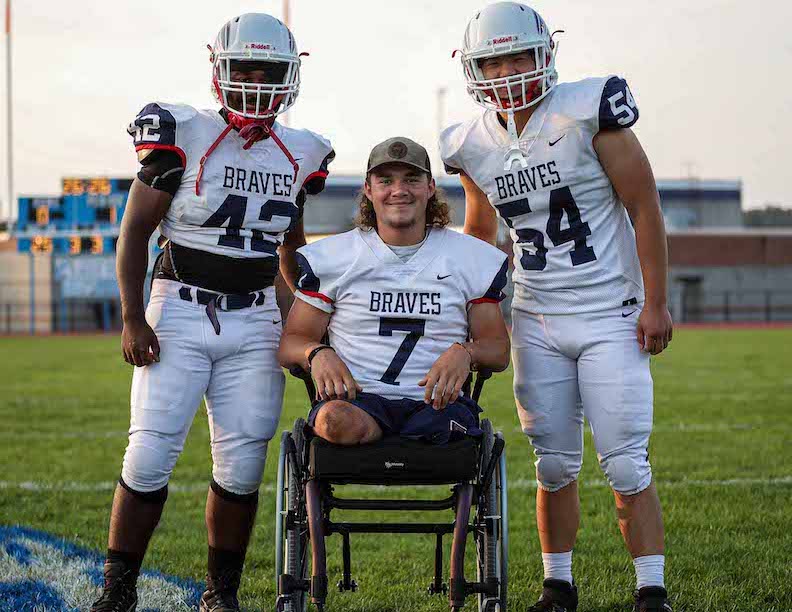 Mason Ellingsworth doesn’t look down. He hardly ever looks down. He’ll look right up at you. And you better look him in the eyes, too, because upon meeting him, the first thing out of his mouth is, “I’m here.” The 17-year-old Octorara senior knows he could very easily not be “here.”

What started out as a beautiful, high-sky Wednesday morning, on June 1st of this year, didn’t end that way. Ellingsworth was getting ready to move bales of hay with a friend. What resulted was a tragic accident where Ellingsworth was almost “not here,” when a 44-ton crane truck coming down PA Route 10 in Chester County tried going around the Case Maxxum tractor where he was sitting in the buddy seat.

The truck hit the back end of the tractor, blowing out a rear tire. The tractor cab glass shattered, and as the tractor started to tip over, Mason was tossed to become pinned between the tractor cab and the road. He was under the tractor for 45 minutes. He remembers feeling no pain until the local fire department pulled the tractor off of him. He was medevacked to Reading Hospital.

He remembers everything. It’s a lot to remember—and a lot to forget.

Ellingsworth was placed in an induced coma. He found out Friday, June 3 that he had lost his legs.

A three-year tight end and linebacker, he still carries the same furry mullet, the same smile, and the same gregarious disposition. His infectious personality lights up every room he’s in. And he refuses to let his circumstances define him.

“Waking up from the coma, I have vague memories of that, but I’m not really 100-percent sure how that went, and my father (Matthew) telling me I had lost my lost legs and I didn’t believe it,” recalled Mason, who played at 6-foot, 220 pounds before the accident. “I think the biggest gut punch came when I wasn’t able to play football. I could look at what happened to me and feel sorry for myself, but if I didn’t undergo emergency surgery to remove my legs, I wouldn’t be here.

“I’m thankful for it every day. It was life-threatening. It’s why I have the attitude that I have. I don’t take every breath for granted. Every day I get up, I’m thankful. It’s why I tell everyone, I’m here.”

Ellingsworth is “here” all right. Here, there, everywhere. He’s been an inspiration to his Octorara Braves’ teammates, serving as team captain, going out in his wheelchair for the coin flips, and as a sideline coach. He’s also an inspiration to opposing teams in the Lancaster-Lebanon League, Section 4.

Octorara coach Jed King was teaching world history when he heard about Mason. King received a text alert from a friend in the Octorara School District who is an area emergency medical technician (EMT). When something happens to one of his players, King finds out quickly.

King remembers taking a deep breath, said a personal prayer and told his students that he needed to step out of class. He checked in with school administrators to update Mason’s status.

“It’s something you don’t really want to believe, like a surreal experience, and I had some contact with what was going on, and slowly it got out through social media what happened,” King said. “This is a close-knit community and people love Mason, he’s that kind of kid. His laugh, his personality, he has a great group of friends, because of who he is.”

“He’s a real leader in the community. That whole day was emotional. Everyone was nervous, because at the time, no one knew for certain how Mason was doing. We just heard his legs were in bad shape. The school sent out an announcement to make sure the parents knew what was going on.”

On Thursday, June 2, King held spring football practice. But it was more like a Sunday prayer meeting. King and his team spoke openly about what had happened to Ellingsworth. Later that evening, a community leader held a prayer vigil around the flagpole in front of Octorara.

“It hit everyone hard,” King recalled. “A lot of people were scared for Mason. It was a time to deal with fear. We had kids breaking down, even though we knew Mason was stable at this point. We wanted to pray for Mason to have a full life and he has.”

A week after the accident, King and several other coaches went to see Ellingsworth, who was still comatose from the various surgeries he underwent.

Mason’s family was understandably protective about his situation.

“I saw some bad injuries on a football field, but I never had had an experience as scary as this,” said King, who’s in his 16th year of coaching. “As a coach, you experience the hardships with your players. It was good to see Mason alive. I wanted to let him know we were praying for him and wanted to make sure his family knew how much the football team, the whole community cared about Mason.”

When Ellingsworth was transferred to Hershey Hospital, King visited him again under strict orders—bring Five Guys burgers, since Mason wasn’t too crazy about the hospital cuisine. They smelled up his hospital room pretty bad, but Ellingsworth got to see his teammates, enjoy a burger and begin the process of healing.

“It wasn’t easy, seeing my family, they were all upset,” Mason said. “We’re getting back to normal now, for the most part. It’s still not easy to cope with, but we’re doing it. I wanted to be part of the team. That goal came the first week in the hospital.

“You do find out who cares about you when you have something like this happen. My hometown, they were there for me, and they still are, every day. If I couldn’t be on the field, I wanted to be a help to my team any way I could. I was on the team for three years, and I know each position.”

In the Braves’ season opener to Muhlenberg, at Octorara’s Gene Davis Stadium on September 2, both teams gathered around Mason. Pequea Valley did the same thing the following week.

Ellingsworth is getting used to this. He’s really not about attention. He’s about being a teenager and trying to have as normal a senior year as he can—even though it did not exactly start that way.

He’s been encouraging and very active on the sideline. That first game was very emotional against Muhlenberg, when it hit him about not playing.

“Mason was a little shaken that he wasn’t out there, but it didn’t take him that long to be the old Mason again, shouting and getting everyone fired up,” King said. “He’s the stiff-upper lip kind of kid. I think there were people in the community there just to see him.”

The crowd stood and applauded when Ellingsworth’s name was announced. Pequea Valley, Octorara’s rival, came over to the Braves’ sideline and raised their helmets in salute to Mason after the game.

Mason recalled a funny story about a former grade school gym teacher who he thought couldn’t stand him. Mason and his friend used to torment her, because “I was an eighth-grade boy,” he says, laughing. A month after the accident he received a card from that teacher with a $50 Amazon gift certificate. That told him she cared.

Mason’s story is far from over. He’s still getting fitted for prosthetics. He still fishes and he still shoots his guns when he goes waterfowl hunting.

“In a way, this is like being reborn,” he says. “I would have been one of eight returning seniors. It still bothers me that I can’t be on the field, I can’t lie about that.”

“I’m still healing. That’s still going on. I’m planning on coming back for baseball season in the spring with my new legs. I want that challenge. I don’t want what happened to me to define me. There’s no anger. I had my legs taken away, but I didn’t have my life taken away.

That fundraiser is at gofundme.com/f/rc9qzs-masonstrong. 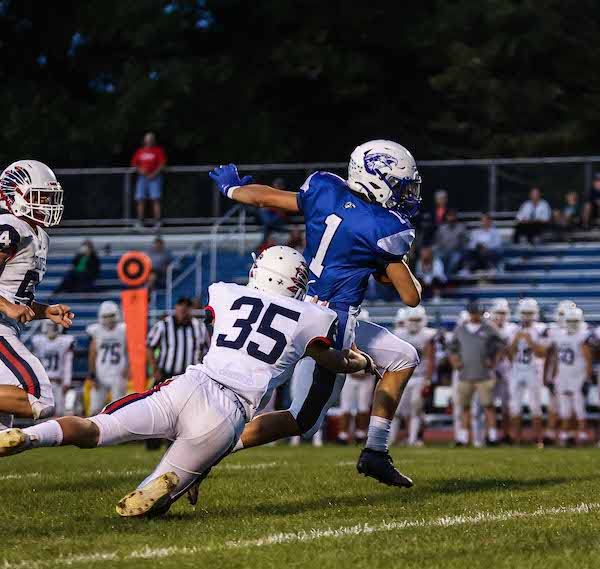 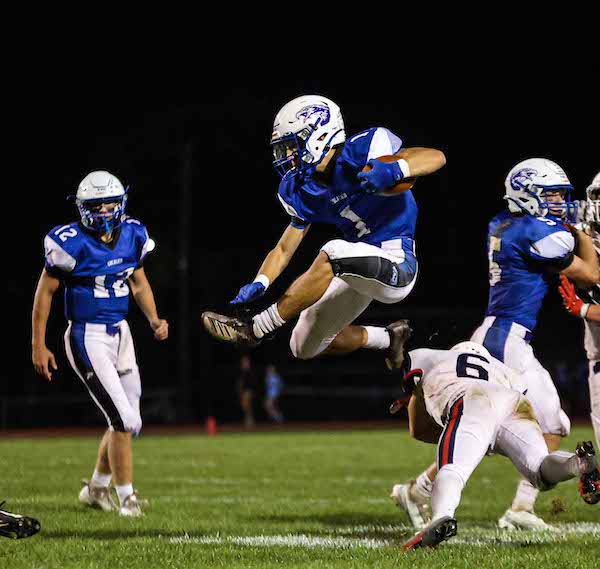