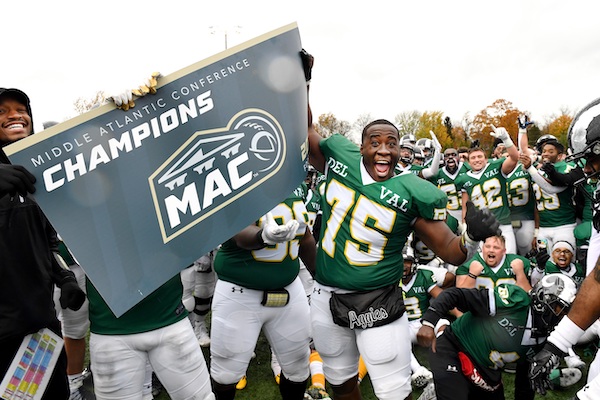 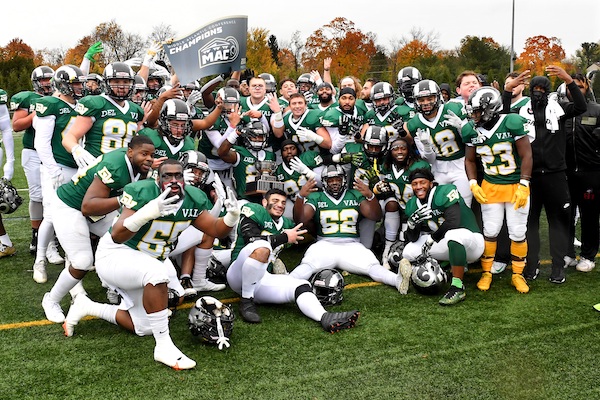 Do you think your job is hard?  Try being an offensive coordinator playing DelVal.

The Aggie defense allowed an average of 1 yard per carry- not a typo- this season.

If a team can’t run, they must pass.  Almost one in five regular season pass attempts against the Aggies ended in a sack or an interception.

Take your three-and-out and repeat.  And repeat.

“I was more nervous going up against our defense in the Green and Gold scrimmage than against any team that we played this year.  Easily,” declared DelVal senior starting offensive lineman Austin Regan prior to DelVal’s first round NCAA playoff game hosting Anna Maria.  “Our defense is unlike any other defense I’ve seen in my life.  Our defense is strong and fast.  They aren’t the biggest guys but they’re dogs.  They’re a bunch of savages out there.”

“Iron sharpens iron,” continued Pennridge’s Regan.  “We had days in practice where we were beating the defense and it was nice to have that back and forth with them.  We knew how good they were and that they had everyone coming back.  We had the number one defense in the country and we were getting better by going up against them every day.”

“The best thing about the defense is that we play together,” added junior defensive end Yusuf Aladinov.  “No matter what player is in there.  It’s like when the Eagles won the Super Bowl and Carson Wentz went down.  It’s the next man up mentality.  That’s what we have.

“Mike Nobile is one of the best defensive linemen in the country,” continued Aladinov, who led DelVal with 17 tackles for loss.  “He unfortunately went down but the next man stood up: Bennie (Cammarano), Sebastian (Montlouis) and Shaun (Balkcom).  We trust each other and play together.”

Aladinov co-led the country with five fumble recoveries.  “I was a linebacker before I switched to D-line and we would always practice getting and scooping the ball up,” Aladinov explained.  “It’s being attracted to the ball.  You have to know where the ball is, even playing D line.”

It’s no wonder that the 11-0 Aggies, winners of four straight MAC titles, completed their first unbeaten regular season since 2017.  With 36 MAC consecutive wins (there was no 2020 season), DelVal’s last conference loss was before the Trump-Clinton election.  DelVal’s 31-3 thumping of Lebanon Valley on Halloween Eve gave head coach Duke Greco his 67th win, a new program record.

“It’s not like Allen Iverson said with ‘It’s only practice.’  We go hard in practice no matter what it is,” Aladinov noted.  “The coaches’ attitude toward practice is, I think, the number one thing that makes the program successful.  They really care about football.”

Offensively, DelVal struck a nearly 50/50 balance in both rushing and passing yards and touchdowns.  Archbishop Wood’s Tahmir Barksdale, only a sophomore, led the team in catches and yardage. Senior Donte Simmons, from Bristol, rushed for 1,000 yards on the way to winning the MAC Offensive Player of the Year.

“Our strength right now is the outside zone,” Regan pointed out.  “Our offensive line is a tight knit group.  We have three seniors and three juniors who really stepped up.

DelVal’s location appealed to both Regan, who came to the Aggies via Valley Forge Military College, and Aladinov.  “Going to another school, my parents couldn’t come to every game,” Regan noted.  “But now that we’re 15 minutes from home, my Dad comes every week.  It’s more of a family feel.  I had a couple of friends who went to DelVal, so it’s nice to see them in the stands as well.”

At William Tennent, Aladinov won a match in the PIAA state wrestling tournament and received grappling offers across the country.  Yet “having your family and friends come to the games is special,” Aladinov echoed.  “I love my house and I love to be home.”

Aladinov made an official wrestling visit to a school in South Carolina and was smitten.  “My Dad said, ‘That’s what you’re saying now but after a month you’ll want to come back home,’ Aladinov continued. “I thought about it once I got back and knew that (DelVal) was probably a better decision for me.”

The Aggies’ rampage continued last Saturday with their 62-10 win over Anna Maria.  The AMCATS returned the opening kickoff for a touchdown, but it was all Aggie afterwards.  DelVal outgained Anna Maria 603 yards to 246, with a nearly perfectly even rushing and passing split.  Simmons and Barksdale were two of seven Aggies to find the end zone.

This is DelVal’s fourth consecutive NCAA playoff appearance.  The Aggies reached the national quarterfinals of the 32-team tournament in both 2017 and 2019, where they lost to eventual champion North Central.

The Green and Gold advance to play Centennial champion Muhlenberg, led by Palisades’ Ethan Brader at running back, in Saturday’s second round in Doylestown.  The Mules stunned DelVal in the 2018 NCAA playoffs 20-13 with a pick-six with under a minute remaining.

The Aggies have not forgotten that game.  Stay tuned.