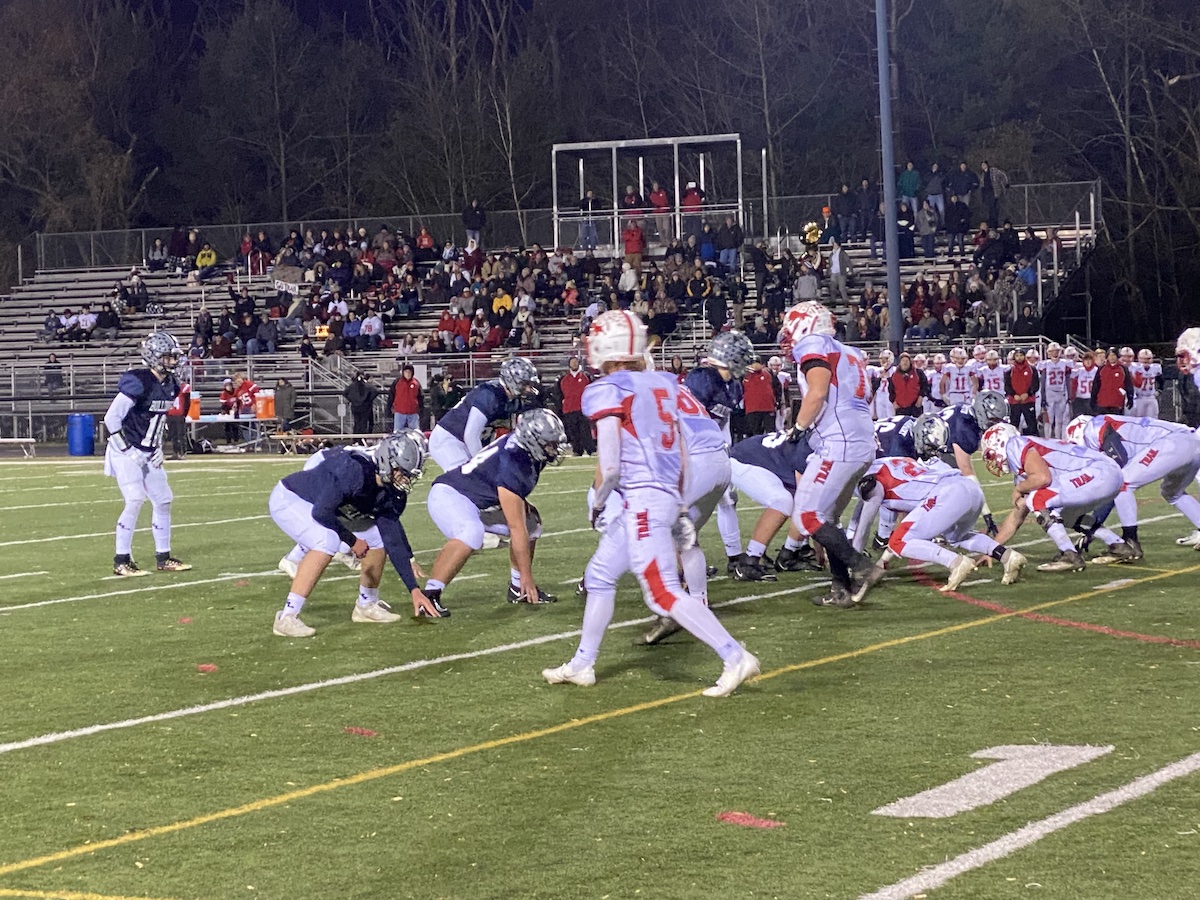 SLATINGTON – It came down to one final stop.

The Bulldogs mounted a goal-line stand inside their one-yard line with 9:32 remaining in the game while leading 21-14 in the first round of the PIAA Class 2A Football Playoff game Friday night at Bulldog Stadium. “The goal line stand switched the momentum of the game,” said Northern Lehigh Head Couch Joe Tout.

On fourth-and-one and the Bulldogs at their nine, Tout didn’t hesitate and went for it. Senior Trevor Amorim broke free around the left end and ran down the sidelines for a 91-yard touchdown run. Frame added a touchdown late in the game and Northern Lehigh (10-3) advanced into the PIAA State playoffs with a 35-14 win over Lackawanna Trail (8-4).

“On Fourth-and-one, if we can’t get that, we don’t deserve to win,” said Tout. The Bulldogs get the winner of York Catholic and West Catholic.

In the first quarter, the Bulldogs passing game was clicking. Northern Lehigh received the opening kickoff and converted a fourth-and-three on their 37 during the drive. Dylan Smoyer threw a beautiful pass to Brett Misera for a 31-yard touchdown. Misera’s kick was good and the Bulldogs led 7-0 with 6:46 left in the first quarter.

Northern Lehigh’s A.J. Jimenez recovered a fumble on Lackawanna Trail’s first possession their 39. The duo hooked up again. Smoyer hit Misera again for a 35-yard touchdown pass and the Bulldogs led 14-0 in the first quarter.

“We like the matchup with our tight ends,” said Tout. “When we are able to put Brett in at tight end, we thought him or Austin were going to come open at some point.”

Late in the first quarter, Lackawanna Trail’s running game started clicking. Lukas Gumble had runs of seven and four, but the biggest was the 47-yard run for the Lions score with 1:57 left in the first quarter. Xander Ball’s kick was good. The Lions cut into Northern Lehigh’s lead 14-7.

The Lions tried a 26-yard field goal attempt that went wide left with 9:55 remaining the first half. Jimenez had a big sack late in the first half and Aiden Parvel had an interception.

“Coach Davis did a good job with our defense tonight,” said Tout. “We don’t see the Wing-T much anymore and once we got use to their speed our guys settled in.”  The Bulldogs went into halftime leading 14-7.

With 6:47 left in the third quarter, The Lions defense came up with the big play. Kolbee Soltis read Smoyer’s pass and picked it off. He went 20 yards for the score. Just like that we were tied at 14.

Northern Lehigh answered right back. The Bulldogs went to their strength, running the ball. Eight running plays later, Trevor Amorim went in from eight yards out. The Bulldogs reclaimed the lead 21-14 with 3:32 left in the third quarter.

The Bulldogs’ defense had goal-line stops on third and goal and fourth and inches. They took over on their one-yard line. Frame ran the ball three times. The Bulldogs were faced with a fourth-and-one on their nine. Amorim took the hand off and the rest is history.

Frame finished the night rushing for 137 yards on 18 carries. Amorim added 121 yards on nine carries. Jimenez on defense was a beast. He had a fumble recovery, a key sack right before halftime and knocked down a pass in a key spot.

“We had Jimenez at linebacker earlier in the year but moved him to defensive end to shore up the defense,” said Tout. “A.J. is a tailback with size playing defensive end and has good speed.”

This was Northern Lehigh’s first PIAA playoff win since 2010.

« Imhotep Charter gets offensive in winning the District 12 5A championship
Wyomissing vs. Boiling Springs Photos »