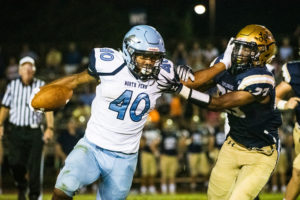 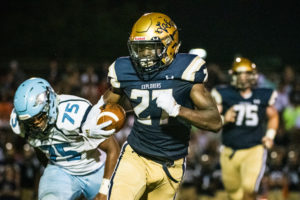 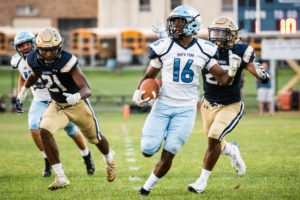 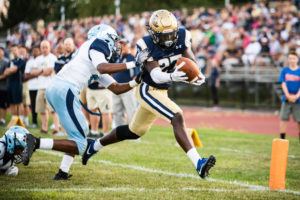 LANSALE, PA — It took a week. That’s all. A week. No one was moving before Sam Brown’s eyes like a movie sci-fi spaceship in warp drive. The La Salle sophomore tailback saw things unfold in normal speed.

The only one seemingly not moving in normal time was Brown.

That was bad news for North Penn on Friday night.

Led by Brown’s career-best five touchdowns and the precision passing of senior quarterback Jack Machita, La Salle exploded in a 42-6 romp over a very good North Penn team to remain undefeated at 2-0, while the loss evened North Penn’s record at 1-1.

For La Salle’s offense, the output came after a start-and-stop performance in the opening game of the season last weekend, a 15-12 win over Imhotep Charter. The Explorers used one key drive at the most important time to find victory.

Against North Penn, the Explorers were in full-go mode from the start. They had the game won by halftime, up 28-0, scoring on four of their first five drives. Meanwhile, La Salle’s defense, which had played so well against Imhotep in the season opener, continued to play well. La Salle held North Penn to 179 yards of offense, when the game was still competitive, with 81 of that sum coming on one pass play.

Brown, a 6-foot-3, 185-pound sophomore, scored on first-quarter four-yard run, and 67-yard TD reception, followed by second-quarter scores coming on a one-yard run and nine-yard TD pass. Brown closed out his storybook game with a 30-yard TD reception in the third quarter putting the game in mercy rule territory with 7:23 left in the third quarter.

There were times when Machita was near flawless. He completed 15 of 19 passes for 263 yards and three touchdowns. The 6-foot, 190-pound Machita had two separate stints when he completed seven-straight passes. The Explorers weren’t faced with a third down until Machita hit Brown for the nine-yard TD pass with 5:18 left in the first half.

For Brown, this game was a welcome change from his first varsity last week.

“I was a little nervous last week,” said Brown, who had eight carries for 60 yards and eight catches for 164 yards. “Imhotep was a faster team and it was harder to run the ball, but in the second half we picked it up and ran it down their throats.

“I still have to get used to this (attention).”

Opposing defenses will be keying on him after performances like Friday night.

As for Machita, there was a little side issue he wanted to make amends with. La Salle started last year 0-3. Machita, then a junior, took quite a bit of pounding the first few weeks of last season, which was cut considerably short when he broke his right thumb against North Penn last year.

“I was injured in this game last year, when I had surgery on my right thumb,” Machita said. “You can say both Imhotep and North Penn were revenge games from last year. We started 0-3.”

A couple of weeks into 2019 and it’s evident a lot has changed in a year for La Salle.

Though the game was played at North Penn, it was considered a La Salle home game

« Breed leads Wildcats to 2-0
Southern Lehigh pulls away from Palmerton, 27-12 »