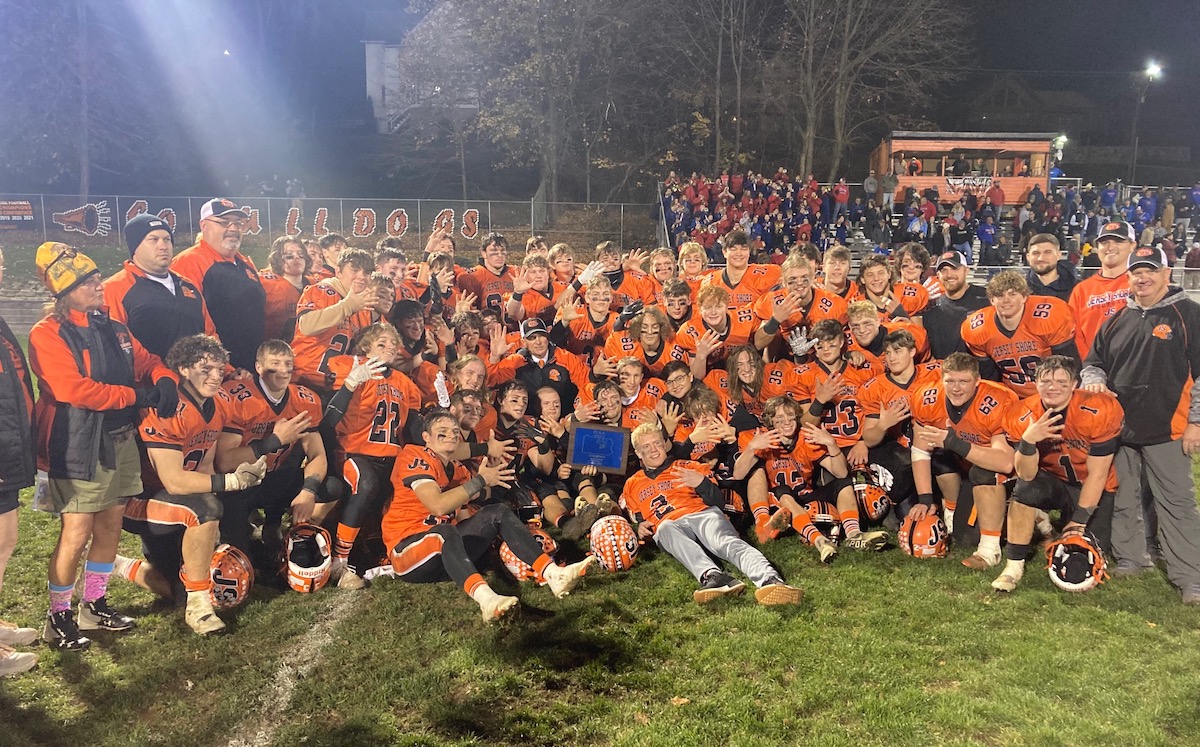 JERSEY SHORE – Over the last decade, Selinsgrove and Jersey Shore have been able to count on meeting each other in the District 4 playoffs almost like death and taxes.

For the ninth time in the last 10 seasons, the Seals and Bulldogs met again in the playoffs, and Thursday marked the eighth time that their playoff matchup occurred in the district championship game.

While the series was largely even during the early part of this recent streak, it has been more one-sided lately favoring Jersey Shore. That trend continued as while Selinsgrove managed to slow down Jersey Shore for well into the second half, the Seals were unable to do so for the entire 48 minutes, while the Bulldogs largely bottled up Selinsgrove’s offense as Jersey Shore won its fifth consecutive District 4 Class 4A championship with a 35-7 win over Selinsgrove.

“We knew our opponent had great players, and they got some players back that weren’t there the first time we played them, and we were playing a 9-2 football team so we knew it wouldn’t be easy,” said Jersey Shore coach Tom Gravish. “We’ve been preaching all year that we’re going to find a test real soon, and we found it tonight. We had to shuffle some things around a bit, some formations, and we went with some different formations that we haven’t shown this year, and I like the way we came out of it.”

Jersey Shore had no choice but to do that after it lost its top receiver Kooper Peacock to an early injury, all while Selinsgrove was greatly limiting the Bulldogs’ high-powered, hurry-up offense well into the third quarter. Selinsgrove, which had lost to Jersey Shore 63-0 back in Week 3, served early notice that it not only wouldn’t be blown out this time but that the Seals were here to compete and win.

On Jersey Shore’s opening possession, the Seals stuffed Hadyn Packer for a one-yard loss on a fourth-and-1 play to take over on downs.

It was then Jersey Shore’s turn for its defense to make a big play, as Selinsgrove quarterback Mark Pastore fumbled as he went back to pass on the Seals’ subsequent drive, and Tate Sechrist scooped up the fumble and returned it 39 yards for a touchdown to give the Bulldogs the early lead less than three minutes into the game.

Selinsgrove forced the Bulldogs to punt on their next two drives before Brady Jordan got loose for a 44-yard touchdown run early in the second quarter to put Jersey Shore up 14-0.

That run was nearly the extent of Jersey Shore’s offense in the first half, however, as the Seals held the Bulldogs to just 103 yards of offense and just four first downs in the opening half.

Selinsgrove’s most impressive defensive stand came later in the second quarter when a 47-yard punt return by Elijah Jordan set up the Bulldogs at the Selinsgrove 6-yard line. The Seals held Jersey Shore to just three yards on three plays and forced them to settle for a 20-yard field goal attempt. But Breck Miller’s low-driving kick missed and may have been tipped at the line.

“We rallied to the football and played very well defensively in the first half, but their defense is just that good and we struggled to move the ball and get first downs,” said Selinsgrove coach Derek Hicks. “In the second half, you could see that tempo offense started to wear on our defense and that’s why they run that tempo. When we were fresh, I thought we played well, but they just wore us down.”

As good as the Seals’ defense was in the first half, however, Jersey Shore’s was better. The Bulldogs held Selinsgrove to only 55 yards in the opening half, and also made an interception in addition to the fumble return for a touchdown. Selinsgrove had just three first downs in the first half, and only seven for the game. Jersey Shore forced 10 punts by the Seals in the game and held Selinsgrove to just 115 yards of offense on the evening, of which 53 came on the Seals’ lone scoring drive of the game. The Seals almost hit on a few long passes, but they were either dropped or the timing was just barely off.

“We weren’t getting a good push inside and unfortunately, against that defense, if you can’t get a push, you’re not going to run the ball very effectively,” said Hicks. “Some of that (missed passes) is a bit of a comfort factor, the timing in your head gets a little messed up when you know that pressure is coming, and there are times when you’re rushing things and are off but just a little bit.”

Selinsgrove’s scoring drive came early in the fourth quarter after the Jersey Shore had doubled its halftime lead with a pair of touchdowns on short drives late in the third quarter. After Selinsgrove forced another Jersey Shore field goal attempt that missed following an 11-play drive that stalled at the Selinsgrove 20, Jersey Shore took over at the Seal 41 to begin its next possession following another three-and-out by Selinsgrove.

Four plays later, Packer, who had been held to just seven yards on seven carries to that point in the game, punched it in from three yards out to put the Bulldogs up 21-0.

Following another stop by the Jersey Shore defense, the Bulldogs took over at their own 42 to begin their next drive, and three plays later, Packer finally got loose, breaking several tackles on his way to the end zone for a second time, this time from 59 yards out to make it 28-0. Packer would finish with 84 yards on 10 carries for the night, with 74 of those 84 yards coming on his final two carries of the night.

The Seals got on the scoreboard on a one-yard run by Pastore at the 7:44 mark of the fourth quarter. That followed a 26-yard run by Tucker Teats, which was by far the longest play of the night for the Seals. Aside from that play, there were only four other plays that went for 10 yards or more on the night for the Seals, as Selinsgrove was stopped by Jersey Shore for negative yardage on nine plays in the game, as Pastore was sacked five times.

Selinsgrove recovered an onside kick following its touchdown, but the Seals went three-and-out, and one Jersey Shore’s ensuing possession, Brady Jordan put a cap on the night with another long touchdown run, this one from 58 yards away, en route to a 170-yard rushing evening on 17 carries. For the game, Jersey Shore amassed 359 rushing yards, of which 285 came in the second half.

Jersey Shore has now won its last four matchups with Selinsgrove in the district playoffs, dating back to the 2018 district championship game. Altogether, the two teams have met 19 times dating back to the 2013 season, with Jersey Shore now holding an 11-8 lead in the series since 2013. After starting out 3-8 against the Seals in the first 11 games of this string of the series, Jersey Shore has now won its last eight games against Selinsgrove, with the Seals’ last win coming in the 2018 regular season. The Bulldogs have also now won seven of the last 10 district titles dating back to 2013.

“We always knew we were going to run into some weird circumstance and did and we found a way to gut that out,” said Gravish. “For Jersey Shore to win five straight championships and seven out of 10, I think that says a lot about our community, how the kids are raised, a blue-collar community. I’m really happy for our players and our assistant coaches did a fabulous job.”

The game marked just the second time this year in 12 games that Jersey Shore did not mercy rule its opponent.

“I was proud of the way that we had to gut this one out. We had to win it in a different type of way,” said Gravish. “That’s always good because some of the things we’ve been practicing, the kids have been saying, ‘are we going to break one of them out,’ and we did tonight and that gave us an advantage.”

Selinsgrove finishes its season at 9-3 after a strong finish to its season and a big district semifinal upset win over a higher-seeded Milton team last week.

“Since that Week 6 loss to Mifflinburg, the changes they made and the hustle, the new guys that came in, they improved exponentially week to week after that loss, and I just told them how proud I was of the effort tonight and the improvement that they made the second half of the season,” said Hicks.