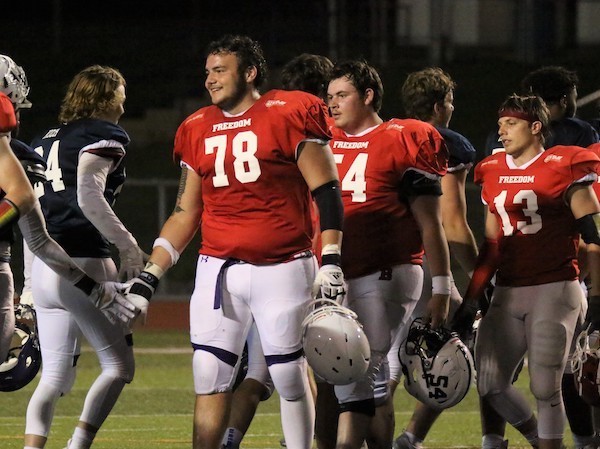 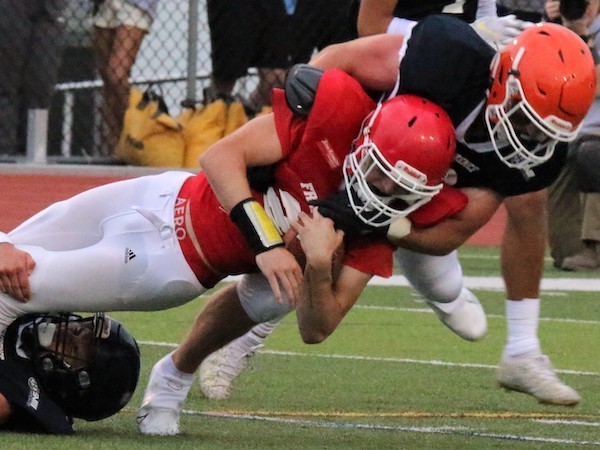 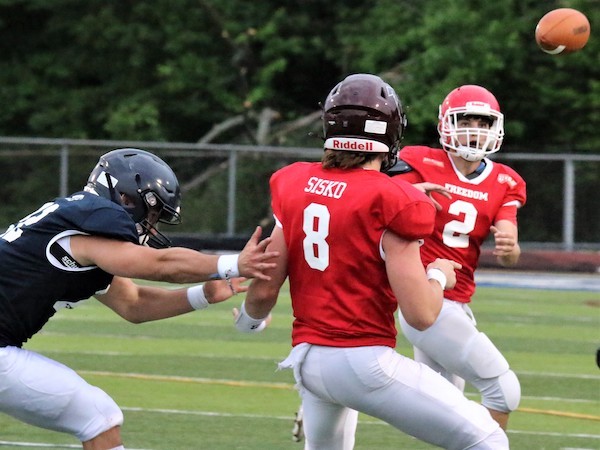 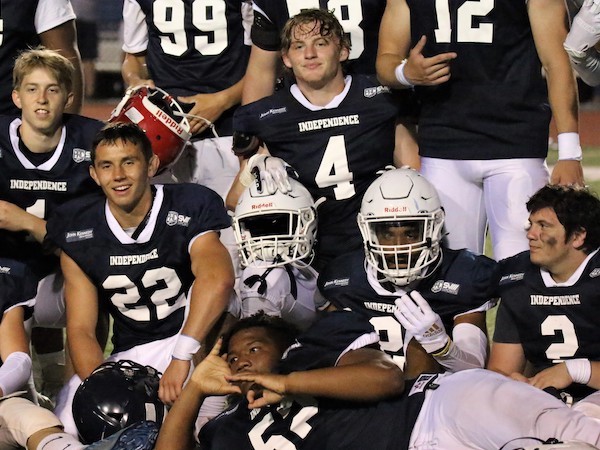 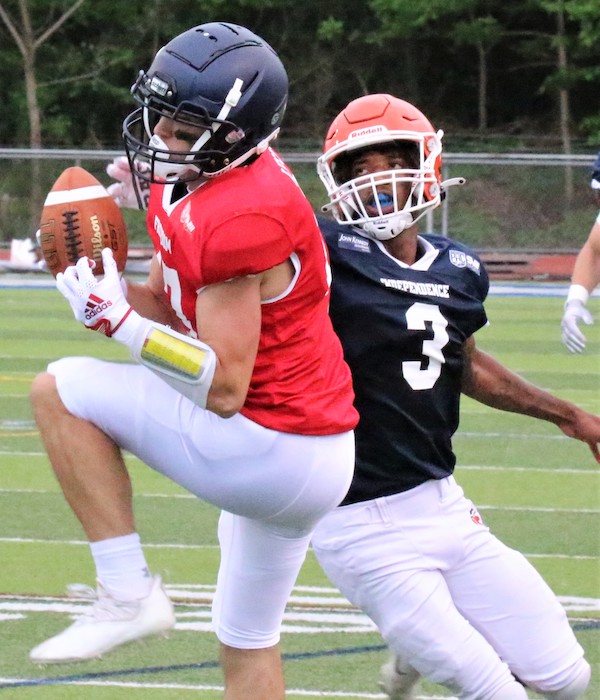 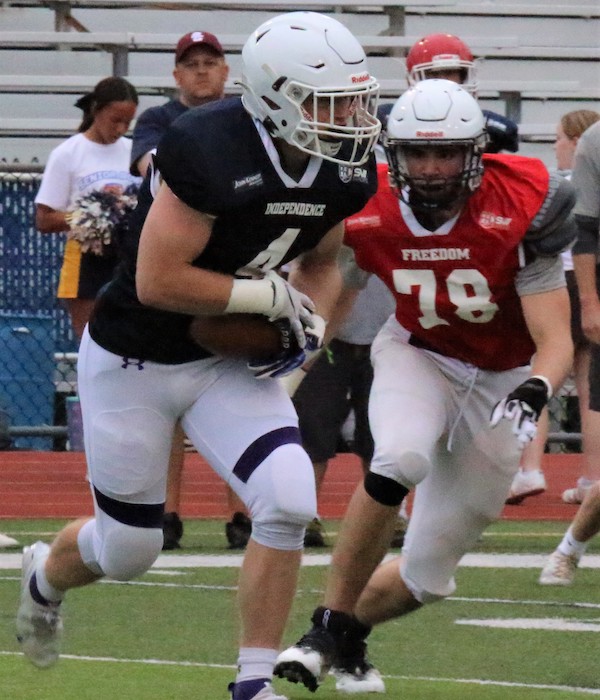 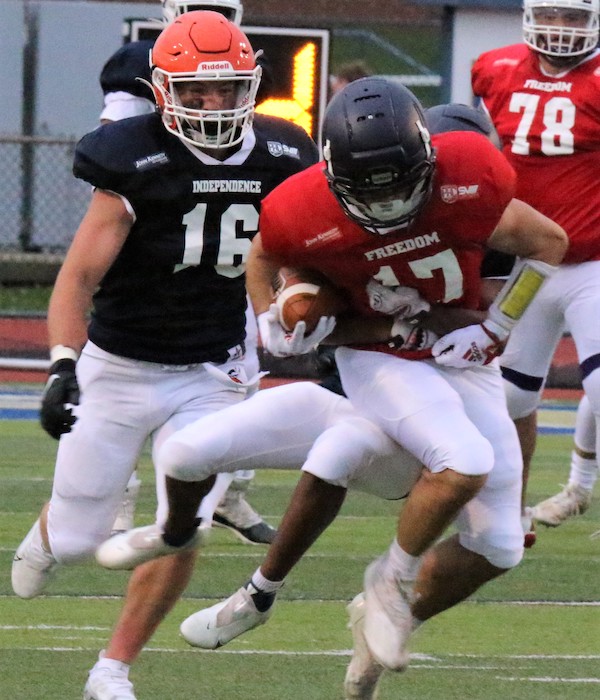 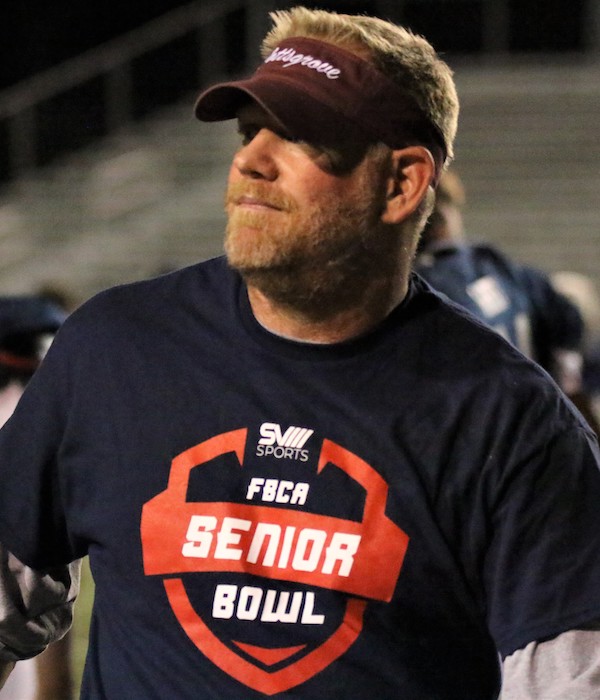 Steele Depetrillo couldn’t make it. The local TV station camera at the other end of the field was inviting. The 5-foot-8, 205-pound Pope John Paul II senior linebacker was able to make it to the 40 before he gassed.

Depetrillo had reason to celebrate. His 47-yard interception return for the Independence team in the third quarter spelled an early end for the Freedom team in the PAC-10 Senior Bowl Monday night at Spring-Ford’s Coach McNelly Stadium.

Independence won, 27-7, thanks in part to Depetrillo’s TD, a pair of TD passes from his Pope John Paul II teammate DJ Clarke and a TD toss from West Chester University-bound Ethan Kohler.

Winning was not the focal point of this game. It was mainly about having fun with teammates and former rivals.

Depetrillo, however, came up a little short-changed when it came to getting the full volume of celebration after he put his team up, 21-0, with 9:28 left in the third quarter.

“When I intercepted the pass, I saw a clear path to the end zone and I said I’m going all of the ways, I’m getting the touchdown,” said Depetrillo, who will continue playing football for NAIA Ava Marie University in Naples, Florida. “I was getting ready to celebrate and at about the 40-yard line, I died. I wasn’t going to make it anymore. I was dying. I ran for about 40 yards and tried to make it to the camera, and then I started jogging.

“This was a great feeling. I got a great four years under my belt. I had a lot of fun moments and it was a good way to go out with the people you love to play football with.”

“I’m never going to hear the end of that,” said Kohler, laughing. “We only had two practices, three hours each to prepare for this. We did the best we could. I’m playing in the Big 33 next Monday, and I’m excited about it. This was great because we played against guys on our team.

“I gave the signal we have for the post, and I think Jeremy knew it and jumped it.”

One of the standout stars for the Freedom team was Owen J. Roberts’ tailback Avrey Grimm, who made a marvelous play in the second quarter for what looked like a 61-yard touchdown with over five minutes left in the half. The TD was called back due to a holding cell.

“This was a lot of fun to be in this game and it’s the first time the game took place because of COVID,” said Grimm, who will continue playing football at Lebanon Valley. “Guys were tackled by their teammates and they were being helped up and laughing. We all had a lot of fun. It doesn’t really matter about winning or losing. It was a lot of fun being with guys you played against.”