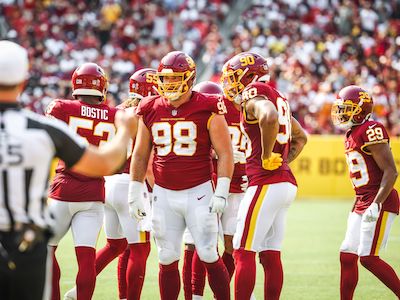 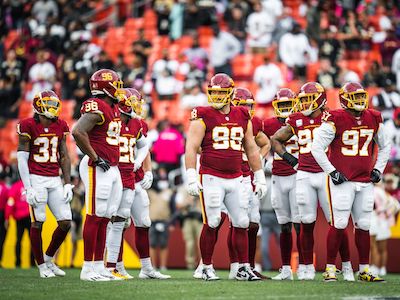 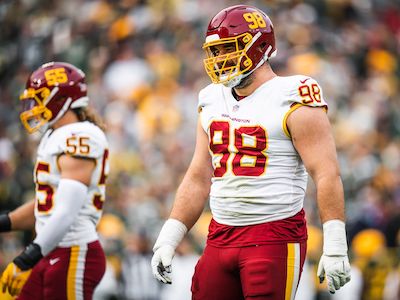 From the Winter 2021 Flemington Life

Hunterdon County is a battleground between Eagles and Giants fans.

Yet this football season, there will be the red splotches of another NFC East rival, Washington, breaking up the sea of New York blue and Philadelphia green.

Now healthy, Matt Ioannidis (eye-an-NYE-dis) is back and playing in his sixth season on defensive line for the Washington Football Team.  The Ringoes product led Washington with 8.5 quarterback sacks in 2019.  Future Hall of Famers Aaron Rodgers, who Ioannidis has sacked twice, and Tom Brady are two of his victims.

His “blossoming” and “taking a huge step forward” resulted in Ioannidis signing a three-year, $21.75 million contract extension in April 2019.  Because of some more marquee names on the Washington defensive line, “Ioannidis is often overlooked,” wrote Mark Bullock for The Athletic in October 2019.  “But Ioannidis is a terrific defensive lineman and fully merited his contract extension in the offseason.”

“I’ve been blessed and fortunate to have had a lengthy career stopping the run and rushing the passer,” Ioannidis shared.

“He was like a pro before he even got to the NFL, with the way he studied,” noted Elijah Robinson, who was Ioannidis’ position coach at Temple and now coaches the defensive line at Texas A&M.  “The way he studied the game plan.  The way he studied opponents.  He would come to me with suggestions.  He was smart.  He understood the psychological component of the game.

“A lot of coaches say this,” Robinson continued, “but he truly was a student of the game.”

Ioannidis is the middle of three brothers who “are all pretty close in age.  We hardly ever played on the same team, but we were always playing together in the backyard with friends.  We all played the same three sports growing up,” Ioannidis remembered.   Lacrosse, basketball and of course, football.

“I really didn’t dream about playing in the NFL.  I didn’t watch a lot of football growing up.  We pretty much spent our whole childhood outside,” Ioannidis ironically points out.  “I played offensive and defensive line growing up which at the youth level, wasn’t a ton of fun.  A lot of it just feels like stand-up wrestling.  It wasn’t until high school where I truly enjoyed football.”

Ioannidis starred on Hunterdon Central teams that lost just five games in his three years.  A favorite memory was playing in the State championship in Rutgers’ stadium as a junior.

The 6’3” Ioannidis, who played collegiately at Temple, was listed at 245 pounds on the Owls’ freshman roster.  He has since put on over 60 pounds of “good weight”.

“The moment you get on campus, they know what they want you to get to weight wise,” Ioannidis explained.  “They sized up my frame, took some measurements and said ‘This guy’s frame can hold this weight’ and they eventually start working you to that weight.  You spend a lot of time in the weight room as a freshman, trying to build good size which helps in keeping that quickness, as opposed to just eating ice cream sundaes.”

As a sophomore, Ioannidis co-led Temple in sacks.  By junior year, he was a team captain.  During his senior year in North Philly, Ioannidis earned an All-American selection from one publication.  He also picked up playing guitar.

By his senior year, Ioannidis knew he had an excellent chance at an NFL future.  He bench pressed 225 pounds an eye popping 32 times at the NFL combine.

Besides changing his weight, Ioannidis also earned the right to change his uniform number from 95 to 9.  At Temple, single digit numbers are awarded to the toughest guys on the team.

Head coach Matt Rhule and his staff, including Robinson, came to Temple right after Ioannidis’ freshman season.  “We pushed those guys really hard in the first offseason,” Robinson admitted.  “I was really tough on Matt.  I think Matt second guessed that he could be anything he wanted to be.”

Robinson remembers “having a conversation where he made his mind up that he was going to stick it out and attack his goals,” the coach shared.  “And he went out and did it.  At that exact moment, I knew it was just a matter of him being confident that he could be what he wanted to be.”

The then-Washington Redskins selected Ioannidis in the fifth round of the 2016 NFL Draft.  Ioannidis was one of the last players cut, but Washington soon promoted him back to the active roster.  He made his NFL debut that September 25th in a 29-27 win over the arch-rival Giants.

2020 was a tough season for Ioannidis; he tore his left bicep in late September and missed the rest of the year.  But fully recovered, Ioannidis earned significant playing time in seven of Washington’s first eight 2021 games.

“It’s no surprise to me that he is on his third contract with the Redskins,” Robinson shared.  “Everything he got, he worked for.  I think that’s the best way to describe Matt: he does the ordinary things better than anybody else.”