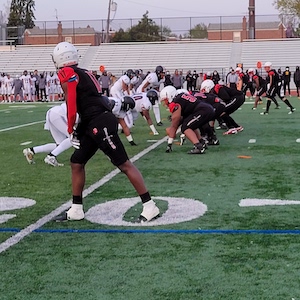 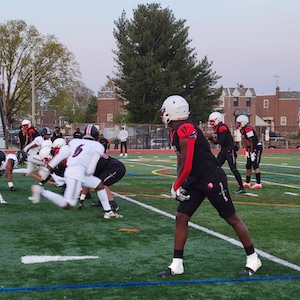 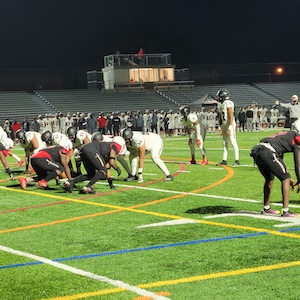 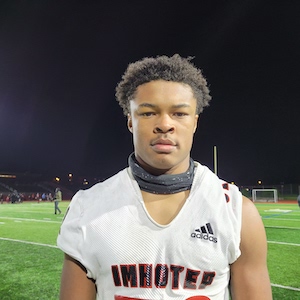 As soon as Northeast quarterback Di’Andre Green snatched the ball out of the crisp spring air Friday night, he was instantly met by a blur accompanied by a tremendous crunch.

Keon Wylie was at it again.

The Imhotep Charter 6-foot-3, 220-pound junior defensive end was a little hard to miss in the Panthers’ dominant 22-8 victory over previously undefeated Northeast, wrapping up the spring season for both programs.

Imhotep finished the short spell 5-0, while Northeast ended its spring stint with a 5-1 record.

Since the fall season was wiped out for the Philadelphia Public League, this spring gave many players a chance to show what they can do for many college recruiters.

Wylie plays in the considerable shadow cast by 6-foot-5, 230-pound

Enai White, who is considered among the top three junior defensive ends in the nation.

While college recruiters flock to snare White, many better begin noticing his partner on the opposite end.

Against a formidable Northeast team, Wylie had five sacks for minus-27 yards. And when Wylie wasn’t bearing down on the Northeast quarterback, he was wreaking havoc on almost everything the Vikings tried offensively, disrupting the running game and pressuring Green into rushed throws.

“That’s just it, nobody really knows about Keon, who was our defensive MVP last year,” Imhotep coach Devon Johnson said. “The kid is a beast. I feel he’s one of the best defensive ends in the state. Keon lives for these types of games. He likes to play on the big stage. He’s not afraid to play against anyone.

“Keon is the type who elevates everyone around him. There are plenty of times I make a play call, and I pop my head up, because it’s Keon making another play in the backfield.”

“This spring was pretty hard, because we didn’t think we would have a season,” said Wylie, who is getting Power 5 consideration. “I gained weight and perfected my craft. I was 170 pounds this time last year.

“I was grinding in the weight room and gained 40 pounds. I wanted to focus on squeezing down and stopping the run this spring. I’ve gotten about 30 offers, I think. I liked how the spring turned out.”

Imhotep led from start to finish, bolting out to a 22-0 lead, before Northeast scored a late cosmetic touchdown. Panthers’ senior quarterback Timothy Lasmith began the scoring with a 1-yard plunge in the second quarter, and the Panthers added two fourth-quarter touchdowns when Cameron Jackson scored on a 4-yard run and Lasmith hit junior wide receiver, Terrance Adams, in the corner of the end zone for the final Panthers’ score.

Green and Northeast continued playing hard, with :10.4 left in the game, Green snapped the shutout with a 12-yard scramble.

“This spring worked out well for us,” Johnson said. “I like what we have coming back and I like the identity we created.”