Imhotep Charter gets offensive in winning the District 12 5A championship 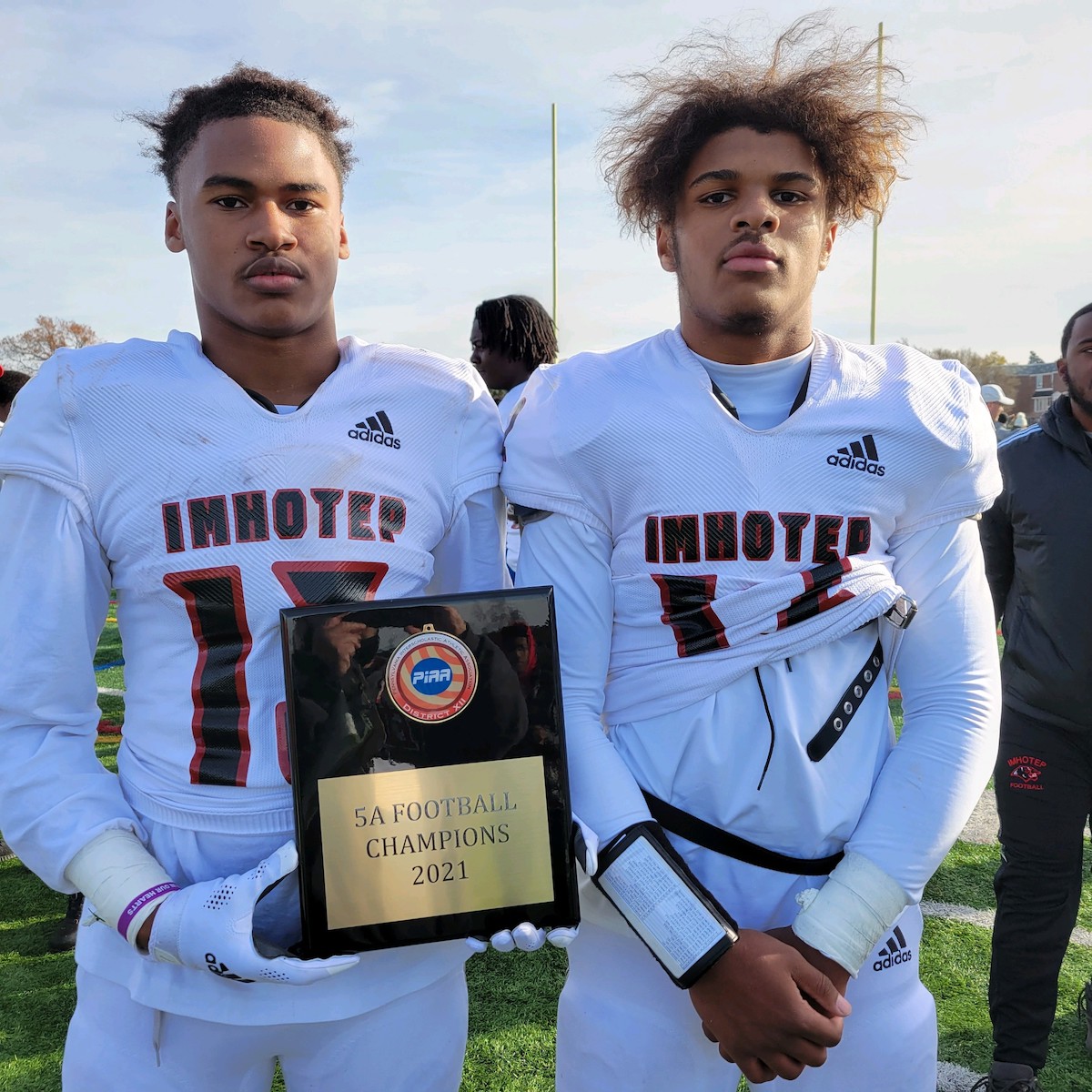 They knew what they had. It just had to cook a little bit. So, when Imhotep Charter’s offense began maturing, things would begin to look frightening as to just good the Panthers could be.

Imhotep rolled over Father Judge 42-7 on Saturday in PIAA District 12 5A championship in a game that seemed to be a formality before it began.

Imhotep (8-1) now advances to take on Erie Cathedral Prep in the PIAA Class 5A state quarterfinals, which will likely be scheduled for Friday, at 7 p.m. possibly at Hershey Park Stadium. Judge (6-5) will play on Thanksgiving against traditional rival Lincoln.

After a slow start, Imhotep’s offense started rolling and didn’t stop until coach Devon Johnson pulled his starters midway through the third quarter. By then, the Panthers had built a 36-0 lead, behind a balanced attack that had sophomore quarterback Mikal Davis complete 8 of 11 passes for 114 yards, including a 48-yard touchdown strike to RJ Atkinson in the second quarter when the game was still competitive.

Behind tackles Kaliem Croswell and Emir Stinette, guards Giovanni Graham and Nasim Gray and center Enyphe Wooten, the Panthers pounded Judge for 219 yards rushing, 101 coming on a career-best effort from freshman Jabree Wallace-Coleman, who had carries of 15, 21 and 38 yards.

“Most of our running backs were banged up early this season,” Wallace-Coleman said. “Once everyone got back, we were okay. I think our offense has a lot of confidence, because we can go that deep at running back. I think we have the best running backs in the state right now.”

Wallace-Coleman may have a point, with sophomore Tre McLeod, Will Robinson and Rahmir Stewart all sharing the ball.

Running this, of course, is Davis.

Unsure the first month of the season, the 6-foot, 200-pound sophomore has developed poise and confidence. He’s making better decisions and sees the field far better than he did a few months ago—which makes for a tough time against future Imhotep opponents—like Erie Cathedral.

“We’ve been putting a lot of work in at practice and going against the best defense in PA, which has made us a lot better,” Davis said. “I feel comfortable with these guys. I love it. Our blocking, our timing, my footwork, we were worked on all of that.”

“Just look at all of the kids with all of the offers, so you know that Imhotep is very talented,” said Judge coach Frank McArdle, who did a great job in making the Crusaders competitive this season, playing up at 6A since Judge was the only 5A team in the Catholic League. “They’re talented and they’re huge, so they were tough to move. With their athleticism, we were trying to go north and south, and we did a decent job early. It just fell apart fast. We have Lincoln on Thanksgiving, and it’s a nice way for the kids to end the season.”

Wallace-Coleman’s 1-yard run with 1:07 left in the third quarter closed the Panthers’ scoring.

Judge did not get its initial first down of the game until the final play of the third quarter. Crusaders’ senior quarterback Mike VanHorn scored serious tough guy points, because he kept getting up after being plowed by the Imhotep defense all afternoon. It led to Judge’s only score, a VanHorn 6-yard run with 6:27 play.

“We’re really excited about Jabree, who was banged up like a lot of other backs,” Johnson said. “We had to eliminate mistakes, and not working behind the sticks. Our kids have been feeling more and more confident with what they’re doing. It was crazy for Mikal Davis who faced Pittsburgh Central Catholic, DeMatha and La Salle in his first three games.

“He’s gaining confidence and growing at the right time, because this is when we’ll need him.”