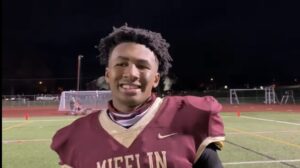 Penn State is a running-back friendly school with a strong tradition.

It’s why Singleton, one of the nation’s best, choose to stay close to home and will attend Penn State next season he announced on Tuesday evening.

Last season, Singleton ran for 1,303 yards on 104 carries for 22 touchdowns for the Mustangs, who went 8-1 and won 5A District 3 championship and lost to eventual PIAA 5A state champion Pine Richland, 48-44, in the state semifinals. It’s the furthest Mifflin has ever been in the state playoffs.

Every time he touched the ball, he was a homerun threat to score—like Warner, Carter, Thomas, Sanders and Barkley.

“Penn State has been recruiting me before my sophomore year and they offered, and I’ve gone to their campus, they’ve been in touch with me for a long time, so when I went on my official visit, it just felt like home to me,” Singleton said. “Notre Dame was a close second, but Penn State felt like home and it felt like family, and they treated my family like family. It was an easy choice.

“Penn State produces great running backs and it’s what I looked for in a school, a program that has a great history to produce players for the league. I’m happy to make this decision now, and all I  have to do is play football.

“I wanted to get this over with before my senior year, and when football starts, I wanted to put all of my energy into the team my senior year. It wouldn’t have been fair to my teammates, plus talking to these coaches, it’s really a lot. It gets all of the stress off of me.”

“I’m excited about this,” Singleton said. “We have some unfinished business from last year. We reached the state semis and we have a team that could go further this year. My choice is made and I’m happy about it, and I can’t wait to start playing again.

“I’m going to a school with a great running back tradition. I’m just hoping to continue that.”

Photo courtesy of Jim Burkman of Spotlight On Berks Sports