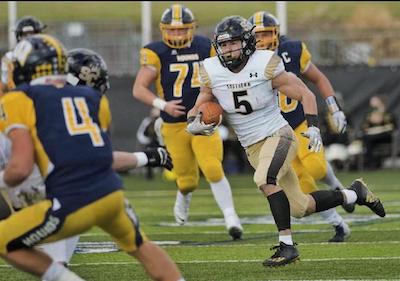 Gavin Garcia was freezing like everyone else on Dec. 10, 2016, sitting on the frosty metal benches in the Southern Columbia stands at Hersheypark Stadium. It wasn’t the comfortable chill either that normally accompanies Southern Columbia teams in Hershey in December, since District 7 champion Steel Valley was really taking it to the Tigers, 49-7, in the PIAA Class 2A state championship that day.

Garcia sat there stewing in frustration, knowing his time would come—and vowing on his watch that Southern Columbia wouldn’t lose like that again.

Garcia’s promise to himself that afternoon endures.

Since then, the Tigers haven’t lost a game, carrying a state-best, four-year 60-game winning streak into this season and an 88-game regular-season winning streak that stretches back to 2011.

At the eye of that success is Garcia, the Tigers’ powerful 5-foot-8, 185-pound rising senior tailback who is on the brink of making history this season on a historical high school program, coached by a historical figure, Jim Roth, owner of the most wins (456) in Pennsylvania high school football history.

If he upholds his vow, Garcia could be the only Tigers’ four-year starting football player to go undefeated with four straight state championships in school history. This will mark the second year Gavin is playing without his older brother, Gaige, now at Lehigh after transferring from Michigan, though the Tigers continue to be well-stocked with Garcias, with younger brother Garrett, a rising sophomore linebacker, starting with Gavin.

Gavin and the rest of his teammates find themselves the resolute curators of “the great numbers.”

There is the Tigers’ 60-game winning streak, and with a 7-0 start in 2021, Southern Columbia would surpass the state all-time record set by Class A Clairton from 2009 through 2013 when the Bears won 66 straight. There is the Tigers’ quest for a fivepete, which would tie their own record for consecutive state titles (2002-2006 as a Class A).

Then there is the 88-game regular-season winning streak that goes way back to a 22-21 Mount Carmel loss on Oct. 28, 2011, in the PA Heartland Athletic Conference, Division II.

“It’s a lot of pressure playing for Southern, just because of the tradition of winning here, but we know what we have to do and we did it last year after losing the senior class with Gaige,” Gavin said. “I think a lot of people doubted us last year and we still wound up with an undefeated season and the state championship. We’re looking to do the same thing this year and nothing really changes.”

Gavin said he’s evolved into being more comfortable with the offense by reading defenses better. As a freshman and sophomore, he relied more on jukes to get by defenders. He benches 335 pounds and is far more explosive. His goal this year is to rush for over 2,000 yards, which he came close to doing last year when he rushed for 1,900 yards in 11 games.

Since he first saw him play, Roth knew immediately what he was getting from Gavin. Among his initial varsity starts, Garcia took a pitch right, saw no open running lanes, reversed field, and out sped everyone for an 84-yard touchdown. Roth walked down the sideline, arms folded with a beaming smile on his face and nodding, “You can’t coach that.”

“That told me I could play at this level,” said Gavin, who’s been academically accepted to Kent State and Harvard, where he intends to play football. “That (touchdown freshman year) told me that I fit in; that I belong. At the time, I was a little intimidated by the older class of seniors and rising juniors.

“I want to win another state championship. Everything else at the end isn’t going to matter. It only matters that we win states again. We don’t pay attention to the streaks. We keep our minds on winning and everything else that comes with it. I would like to rush over 2,000 yards, and maybe there is a chance to be Southern’s all-time rushing leader.

“We just have to let that happen naturally. My goal is to be the only four-year starter to go undefeated and win a state championship. I would even beat out Gaige with that (laughs).”

Roth is looking to use Gavin more on defense this season, probably at safety. Gavin will be one of Roth’s five captains, along with quarterback Liam Klebon, receiver Jake Rose, one of the state’s best-kept secrets, tackle Carson Savitski, and defensive end-tight end Derek Berlitz.

But there is no doubt about this being Gavin’s team

“Gavin talks,” Roth said. “Sometimes, you have a real good player where they let their play talk. Gavin will let his play speak up, but he will be vocal with his teammates. In big games, he is the most vocal and he’s such a determined, relentless type of athlete, that even if he wasn’t vocal, he would still get a lot of respect from his teammates based on his approach to the game.

“It’s extremely rare what Gavin has achieved and what he’s a part of. He’ll have a tremendous year running the ball, but we don’t let our starters play a whole game a lot of times, and Gavin still rushed for over 1,900 yards last year in 11 games. We’ll use him more on defense, but he’s still going to be our No. 1 back.”

One thing is certain: Southern Columbia will be looking to make more history in 2021, spearheaded by Gavin who may be part of a special group alone in December in Hershey, where comfortable chills normally accompany Southern Columbia teams.