Garnet Valley outlasts Quakertown, 58-39, in the District 1 6A semifinals 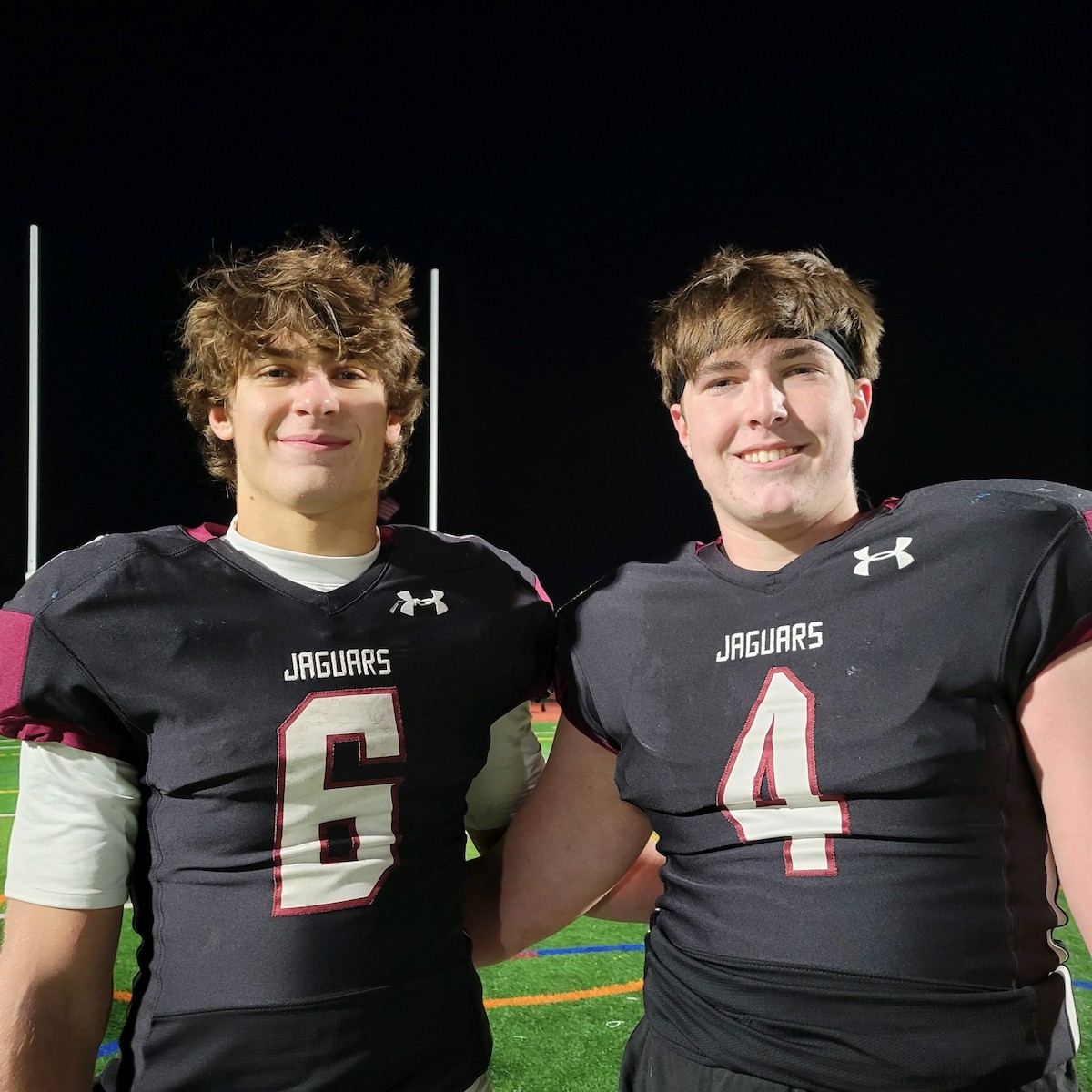 No. 6 Shane Reynolds and No. 4 Andrew Jackalous

The Garnet Valley machine has been impervious to everything it confronted this season. But the machine was having problems Friday night. Uncharacteristic problems. There were 12 men in the huddle in their first drive, forcing an early timeout. Then there was the fake punt debacle, which resulted in Quakertown’s first touchdown and first-quarter lead.

Feeling a part of those problems was senior Shane Reynolds. It was the Garnet Valley 6-foot-1, 215-pound tailback who flubbed the fake punt attempt—and was kicking himself because of it.

As Reynolds awakened, so did the Jaguars, who overcome a tough, stubborn Quakertown team, 58-39, in the PIAA District 1 6A semifinals to remain undefeated this season at 13-0.

Garnet Valley, the No. 1 seed, will now host Coatesville, a 50-14 winner over Ridley in the other semifinal, next Friday, Nov. 26 in the District 1 6A championship.

Reynolds, who’s bound for Navy on a football scholarship, played a huge role. He rushed for a career-best 248 yards on 23 carries and four touchdowns, two on runs of 65 and 43 yards.

“It’s exactly what I was thinking, I had to make up for the fake punt,” Reynolds said. “I knew I gave (Quakertown) momentum and I had to pay back the team. The fake punt was something new we were looking at and I got a little antsy, got a little scared out there, I wasn’t used to it.

“I think we need to stay locked in and stick to what we know. We need to play our second half of football in every game.”

Part of that was a key segment in the game. Already leading 24-20 at halftime, Quakertown recovered an on-side kick to begin the second half and possibly take a big lead against explosive Garnet Valley.

The Panthers were driving to go up two scores, when faced with a fourth-and-one at the Garnet Valley 29. Quakertown’s John Eatherton had been gouging Garnet Valley all night. Just when it seemed the Panthers would continue the drive, Jags’ senior middle linebacker Andrew Jackalous came knifing through to take down Eatherton a yard back and stopped the series.

That launched the Jags into three-straight scoring drives that swayed the momentum back towards Garnet Valley. It was Jackalous third-quarter interception that led Reynolds’ third TD.

It was the turning point of the game—because Quakertown wasn’t showing any cracks in the armor.

“We going to look at our mistakes and correct them, because they’re definitely mistakes made,” Jackalous said. “We knew we needed stops on defense, and on the fourth-down play it was a pitch outside, I scraped to the outside. A hole opened up, I met (Eatherton) in the hole and I credit that to the weight room.”

Quakertown’s three-year starting quarterback Will Steich kept the Panthers a constant threat. For the game, he completed 23 of 40, with three interceptions (two by Jackalous) and three touchdowns.

“Quakertown coming in was a very good team,” Garnet Valley coach Mike Ricci said. “I loved their offense. Their quarterback was a three-year starter who made great decisions and got them out of so many difficult situations. (Zach Fondl) is a great receiver, and we knew we had t be at our best.

“What I loved is they hit us in the mouth in the first half, and I couldn’t be prouder of our guys how we responded and dominated in the second half. We have Coatesville again and we’ve had some great games against them in the past.”

Finally, Quakertown coach George Banas and his team deserved to get this far. This year’s Panthers broke new ground as the first-ever Quakertown team to win two district playoff games and go this deep into the season undefeated.

“This was a miracle season and it’s hard to put this season into perspective when you’re a high school young adult, because you live in the moment,” Banas said. “It was 24-20 at the half, and even in third quarter, we had down to 11. They came at you in different ways, and if you’re not assignment based, they will hurt you. They run hard. (Reynolds) is a hell of an athlete and he’s going to Navy.

“I think (Garnet Valley) could make a run (at the state championship). They have the coaching and depth and the emotional, with (Ricci in his last season) leaving.”

“That’s the honest truth and I don’t BS people.”

One Response to “Garnet Valley outlasts Quakertown, 58-39, in the District 1 6A semifinals”