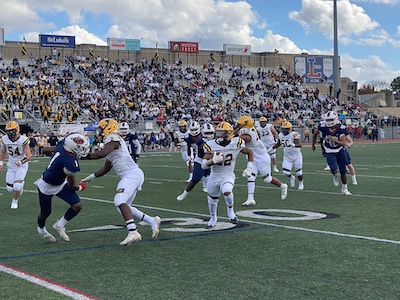 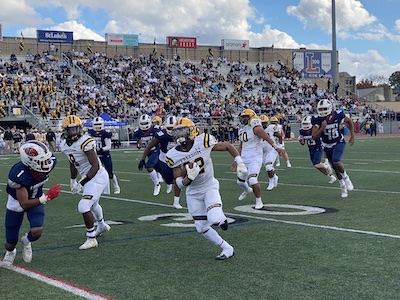 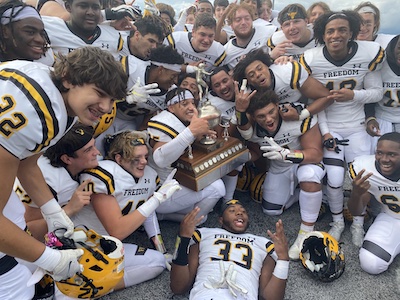 The Patriots were down six at halftime but scored 21 unanswered points in the second half in a 28-13 win over Liberty (1-9). With the win, Freedom wins the “Christmas City Title” by beating Liberty and Bethlehem Catholic.

“I have been in 16 of these games and to come out of here with a win for our kids, school, and community is huge,” said Jason Roeder. “You can’t come to this game and not realize what it means to our community.”

Freedom got on the board first with a Taylor three-yard touchdown run on their opening drive. Zeyad Ragab’s kick was good and the Patriots led 7-0 with 1:31 left in the first quarter.

After giving up an early touchdown, the Liberty defense stepped up in the first half. They forced three punts and got an interception to stop another Freedom drive. With Freedom up 7-0 early in the second quarter, Karim Brice found a lane on a punt return and brought it back 75 yards for the return. The Connor McLaughlin kick was no good and the Patriots still led 7-6 with 11:15 remaining in the first half.

The play of the game came midway through the second quarter. Liberty’s Nico Sciarra tipped the pass to himself and caught the ball on his back for the interception.

The Hurricanes wouldn’t capitalize until their next drive. After a bad punt that was held up by the wind, they took over on Freedom’s six. Three plays later, Kyndred Wright powered in from one-yard out. With 2:12 left in the first half, Liberty took their first lead of the game.

The Hurricanes led 13-7 at halftime.

“It was a quiet locker room at halftime,” said Roeder “We felt we needed to make some adjustments and our coaches did that. Our message to the kids was that we are here to play four quarters.”

The Patriot’s offense flexed their muscle in the second half.

Leading the way in the second half was Freedom’s Quarterback Brian Taylor. He finished the game passing for 110 yards and rushing for 86 yards and scoring four touchdowns in the win.

“The Offense Coordinator said to Taylor ‘lead us and we got faith in you,’” said Roeder. “He is in a high-pressure situation and he stays even keel. He has the right demeanor for the position and that showed in the second half.”

Just like the first half, Freedom scored on their second-half opening drive. Taylor avoided a sack and threw a dart to Ethan Neidig for the 24-yard touchdown pass. The Patriots took a one-point lead,14-13 with 9:24 left in the third quarter.

Freedom extended their lead to 21-13. The Patriots capped off the 11-play drive with a Taylor seven-yard touchdown run. Taylor added one more touchdown to his day. This time a 24-yard run in the fourth quarter.

Next week Freedom will host Easton in the District 11 6A tournament.