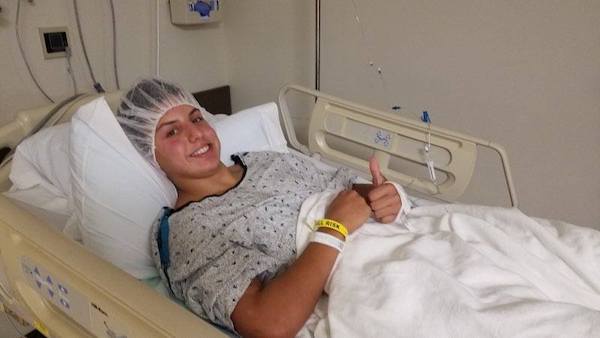 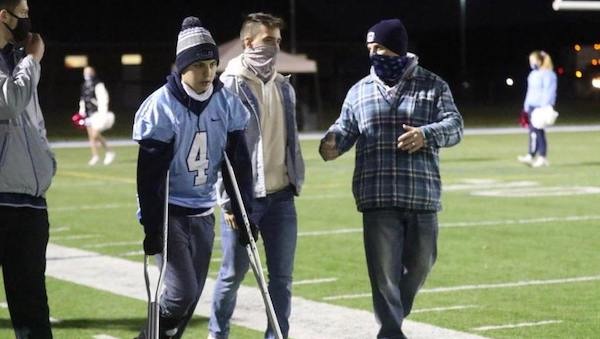 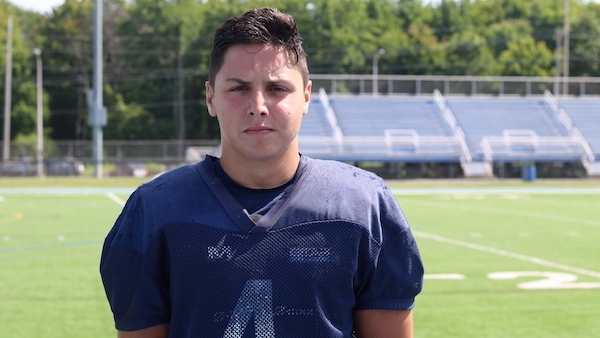 The whirl of the crowd on a balmy Friday night vanished. Lips were moving without sound. Arms were rapidly motioning for the trainers. Everything took a gauzy grey surreal turn, with players and officials moving in slow motion, moving to Jake DelGaudio.

DelGaudio himself didn’t know why, until he looked down and saw a shoe—his right shoe—pointing in a direction it shouldn’t be. That’s when he covered his eyes in disbelief like somehow the horrific episode would go away.

A few seconds earlier, DelGaudio, the Dallas High School 5-10, 175-pound tailback, was running play “51 stretch” left. As he was tackled, his right foot got wedged into the turf, while the defender was driving him back into the ground. Then everything around him went dark and silent. He was laying supine pounding his fists into the field thankfully numb by shock on September 25, 2020, against Wilkes-Barre, wondering if he would ever walk normally again.

A few weeks from now, DelGaudio, 17, will complete a remarkable comeback when he runs onto a football field again, as a two-way senior starter at running back and inside linebacker for the Mountaineers.

His scarring memory could be like hugging a teddy bear festooned with shards of glass, the tighter you cling to it the deeper it digs into the psyche.

Instead, DelGaudio’s comeback story has revealed his courage and perseverance that’s been an inspiration to his teammates, to Dallas High School and the surrounding community. He found out through gruesome adversity how much people, many of them strangers, cared about him.

“I was in disbelief. I covered my eyes with my hands and my first thought was that I would never play football again.”–Jake DelGaudio

“I remember looking down at my leg, which was at a 90-degree angle,” DelGaudio recalled. “It happened so fast; I couldn’t believe what was going on. It’s interesting because I didn’t feel a thing. I remember being more afraid of what it looked like than the pain.” 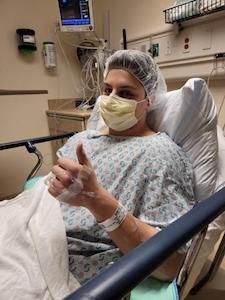 “I was pretty scared. I remember saying, ‘I don’t think I’ll ever play football again.’ I remember my parents saying, ‘We can make that decision later.’ But at the time, I was pissed off at the sport.”

Dallas coach Rich Mannello has been involved with football for almost 40 years, but had never experienced one of his players suffer an injury like DelGaudio’s. Mannello, who will be entering his seventh season as the Mountaineers’ head coach, was coaching King’s College when he saw a similar injury to an opposing player a few feet away from him.

Those “it” moments tend to resonate.

“What Jake went through is one of the worst injuries I ever saw,” Mannello said. “Jake has a tremendous work ethic and he went from a sophomore who didn’t start at all to becoming a two-way starter his junior year. The kid is just a grinder and this happened in the second game of last season.

“It was bad. It was a running play that didn’t end well. We knew immediately something was wrong. We got the kids away, then instincts took over and it was all about Jake. We were fortunate that Jake’s father (Walter) is a doctor (urologist). He calmed Jake down.

“There was no question in my mind that night that Jake would be back. After the first surgery, there were other surgeries, but the kid has such great character. The lacrosse team voted him team captain in the spring after the surgery. He willed himself back into football, and he’ll be back on the field again.

“With other kids, I would say it was a miracle that they’re back. Not Jake. If it’s something within Jake’s control, there was never a doubt he would be back. We’re a different football team when Jake DelGaudio is on it.”

DelGaudio had to wait a day to have the major surgery, since the orthopedic surgeon was not available. The medical team set his leg the night of the injury. The surgery went well. He was in the hospital for two days, but he wanted to go home.

DelGaudio, who carries a 100.18 GPA and achieved a 1,410 SAT super score, had to deal with the pain. More so, he had to confront the depression of feeling he let his teammates down and the anxiety of whether or not he would walk with a limp for the rest of his life.

The nadir came while he laid in bed with his leg in a cast propped up on pillows. Day, night, that’s where he stayed.

His parents, Walter and Kavita, waited on their second-oldest of four. Still, it didn’t ease the nights and countless hours Jake stared into oblivion wondering if he would ever be normal. He wanted to have a family someday and he feared he would never be able to run around after his kids.

“The tide started to shift in November, getting back in the weight room, bench pressing and working out with my teammates, was a big boost for me and made me feel so much better.”–Jake DelGaudio

For the first two weeks after he got home from the hospital, Jake was getting two hours of sleep a night, taking two, sometimes three oxycodone pills to relieve the hurt. There were times he didn’t want his family to see his distress. He wore a good mask, putting on a brave front. He knew if they saw him in pain, getting emotional, they would get emotional.

“I have a very amazing support group, between my friends and my family. The night I got hurt, I got over 100 text messages while I was in the hospital and I have one the greatest coaching staffs in the state,” Jake said. “I’ll never forget coach Mannello saying to me, ‘Jake, I might not be a therapist, but I have two ears and I can listen. When you need to talk about something and you have to get it out, you can come to me.’ Coach Mannello said that to me twice, and the second time, I was just getting back to lifting, right before my third surgery, I almost broke down in tears.

“Between coach Mannello, my mom, who was there the whole time, and knowing everyone had my back, I knew I wasn’t going through it alone. My support group, I mean the Dallas football community, was great. Another huge moment for me was eight weeks later (after the injury) when I was able to walk.

DelGaudio has seven vertical scars around the bottom portion of his right leg from the three surgeries. One six-inch scar is more distinct than the others because it’s where a titanium rod was inserted to stabilize his right tibia that will be a life passenger.

He admits it took some deep self-reflection to think about playing football again. It weighs on DelGaudio’s mind the time he suffered a left tibial plateau fracture in seventh grade playing football.

Jake, the younger brother of Luke DelGaudio, a walk-on at Pitt after leading Dallas to a 15-1 record and the PIAA Class 4A championship game in 2019, said the thoughts of playing football began creeping up in the spring when he started playing lacrosse for the Mountaineers.

In mid-February, DelGaudio crutched his way to Dallas lacrosse coach John Zug during one practice with a plan laid out for a scheduled return in late April. Zug stressed to DelGaudio to take it easy. In his first year playing varsity lacrosse, DelGaudio took practice faceoffs in a walking boot. The only practices he missed were for physical therapy.

“I loved that Jake had this plan, but I wanted to make sure Jake was safe and recovered well enough to play,” Zug said. “The main thing about Jake’s experience is his dedication and self-motivation. He’s just a different kind of person. If someone was able to handle a tragic situation like this, it’s Jake. He made a huge impact when he came back. We made sure it was a home game when Jake returned.”

It came against Tunkhannock on Saturday, May 1. Mannello marched the football team from the weight room to the lacrosse field to support him.

“I did a lot of thinking about the future, because coming back to football, I risk getting injured again, but playing lacrosse made me start to see I could play football again,” Jake said. “It was a lot of physical therapy and talking to my therapist and coach Mannello, who both told me that I didn’t have to play football again. They said everyone would understand if I didn’t.

“But I can’t let my teammates down and my community down, because I know everyone is counting on me coming back this season.”

First, Jake had to overcome the psychological barrier of trusting his recovery. Will the leg hold up? Can he take a hit? Part of that trust came from taking faceoffs for the lacrosse team. This summer Jake has been running around in shorts and t-shirts.

“I didn’t really begin trusting my leg until recently,” Jake said. “I just finished physical therapy and a few weeks ago to a month, I wasn’t really able to run that well. I’m able to play decent football, not where I was last year, but I am doing it pain free and I’m building my speed.”

Jake also knows he won’t really be tested until he takes that first hit.

“Football to me is the sport that I love and I love working hard to play it, but last year when I broke my leg, I really felt like I let my team down,” Jake said. “I was on the sideline the next game after I got hurt, and my attitude was that I should have been out there. In time, I kind of realized that not everything is about football.

“I tried to put everything in perspective. There’s more meaning to life than football, but football is still very much a part of me. The reason why I’m coming back isn’t so much for football, but because I love my teammates.”

As for his future, Jake appears set. His academics can get him into any major school in the country. He’s visited Florida, North Carolina, Coastal Carolina and Pitt. Jake is thinking about possibly following his father’s path and going to his alma mater, Pitt, then attending Pitt’s medical school.

On August 27, Dallas has their home opener against Valley View. It won’t be an easy night for DelGaudio, who will probably be going through a gamut of feelings.

The thought strikes a touching cord with DelGaudio now. The stadium will be packed and standing for No. 4. DelGaudio may need to carry a box of tissues with him. It promises to be a night the Dallas community tangibly revels in Jake’s comeback odyssey.

He went from thinking he might not walk correctly to playing football again.

“It will be something special,” Jake said. “I don’t know if I’ll be ready for that (outpouring). I’m a better person for the journey and the good that’s come out of this. I don’t think I’ll take simple things like walking or playing football again for granted.

Photos courtesy of the DelGaudio family