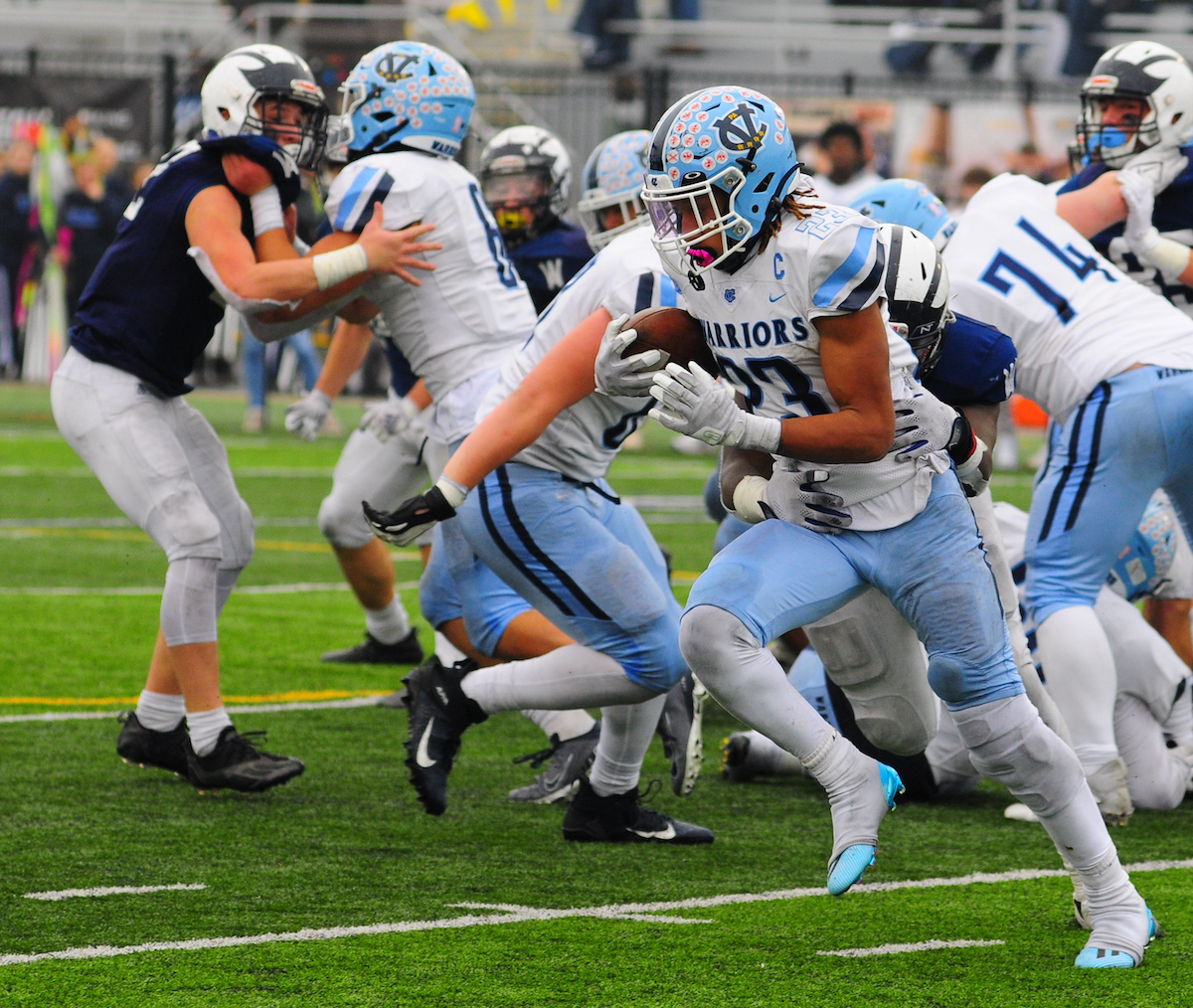 On a gray, overcast Saturday afternoon at Hersheypark Stadium, something had to break in the PIAA Class 3A state championship between two teams that have built a cross-state rivalry.

It was Central Valley (15-0) that was saved by a fourth-quarter play by its stellar tailback Landon Alexander to pull out a 7-0 victory to win its second-straight PIAA Class 3A state championship ending Wyomissing’s 15-game winning streak and second-straight bid at a state title.

It was the lowest-scoring state championship game since Farrell’s 6-0 victory over Southern Columbia in the 1995 Class 1A state championship. It’s also the first time Wyomissing (15-1) was shut out since a 49-0 washout by Middletown on November 16, 2017, in the first round of the 3A state playoffs.

Alexander finally broke what had been a 36-minute battle of wills, when he burst free down the sideline after breaking several tackles for a 28-yard touchdown with 9:54 left to play.

“I knew where the play had to go and with their defense, it was hard to run the ball, because they were moving and shifting, and a shout out to their defense, but I kept stretching and stretching it, and saw a little hole,” Alexander said. “I shrunk those pads and went in there. This is my senior year and winning back-to-back with boys that I’ve been playing with since I was younger, I wouldn’t want it any other way.”

After the Alexander touchdown, the Spartans bounced right back on the ensuing kickoff, when Drew Eisenhower scrambled 63 yards to the Central Valley 28. Wyomissing reached the Central Valley seven with 6:34 left, when Central Valley jumped offsides at the seven, pushing the ball to the Warriors’ three.

“I watched film all week and I knew their guard was back, and he was going to pull,” FitzSimmons recalled. “I knew big 74 (Wyomissing tackle Jven Williams) was going to come down and block it, so the guard could pull. I had to beat him off the jump, went right through, and got to the quarterback.

“This means a lot. This is like my family; these are my brothers and I got a little emotional there at the end. This means a lot winning (back-to-back).”

On third-and-five with 1:48 to play in the third quarter, Wyomissing senior defensive back Thomas Grabowski came up with the play of the game—to that point, snaring a one-handed interception at the Central Valley one. It staved off yet another Central Valley threat, and it preserved the scoreless tie entering the fourth quarter.

“I haven’t seen a film of the touchdown play, all I know is our defense did a great job and their defensive team, we couldn’t block them,” Wyomissing coach Bob Wolfrum said. “We got a few plays off early, but there was nothing we could do consistently. It’s really frustrating when there is nothing that you can call your own. We couldn’t. They got one play. We made a lot of great stops on defense.”

Alexander, who broke the school career rushing record with 3,929 yards rushing this season, finished with a game-high 231 yards rushing on 35 carries and the game’s only score, averaging 6.6 yards a carry.

“They were big upfront and we couldn’t get anything going up front, and on the touchdown run, we sealed the end off and (Alexander) made a great cut and he was off to the races,” Grabowski said. “I’ll always remember the brotherhood on this team. There’s nothing you can compare it to.”

Central Valley, however, had its chances in the first two quarters that tested Wyomissing’s defense early—and the Spartans passed.

The Spartans won the toss and deferred, turning the ball over to Central Valley and Alexander. The Warriors took the opening kickoff to Wyomissing three-yard-line, where they were forced to try a 24-yard field goal by Serafino DeSantis, which was blocked by the Spartans’ junior defensive lineman Jamhi Jackson.

Alexander played a huge role on the opening drive, taking four-straight handoffs for 49 yards. By the end of the first quarter, he had 56 yards on seven carries.

The other key Spartan defensive moment came on the first play of the second quarter. Central Valley tried to convert a fourth-and-seven at Wyomissing’s 27. However, Antwon Johnson’s short pass to Jayvin Thompson was snuffed out by Spartan defensive back Nevin Carter at the Wyomissing 24.

Central Valley went from averaging 7.7 yards a rush, to 2.2 yards/per rush, with no first downs throughout the second quarter.