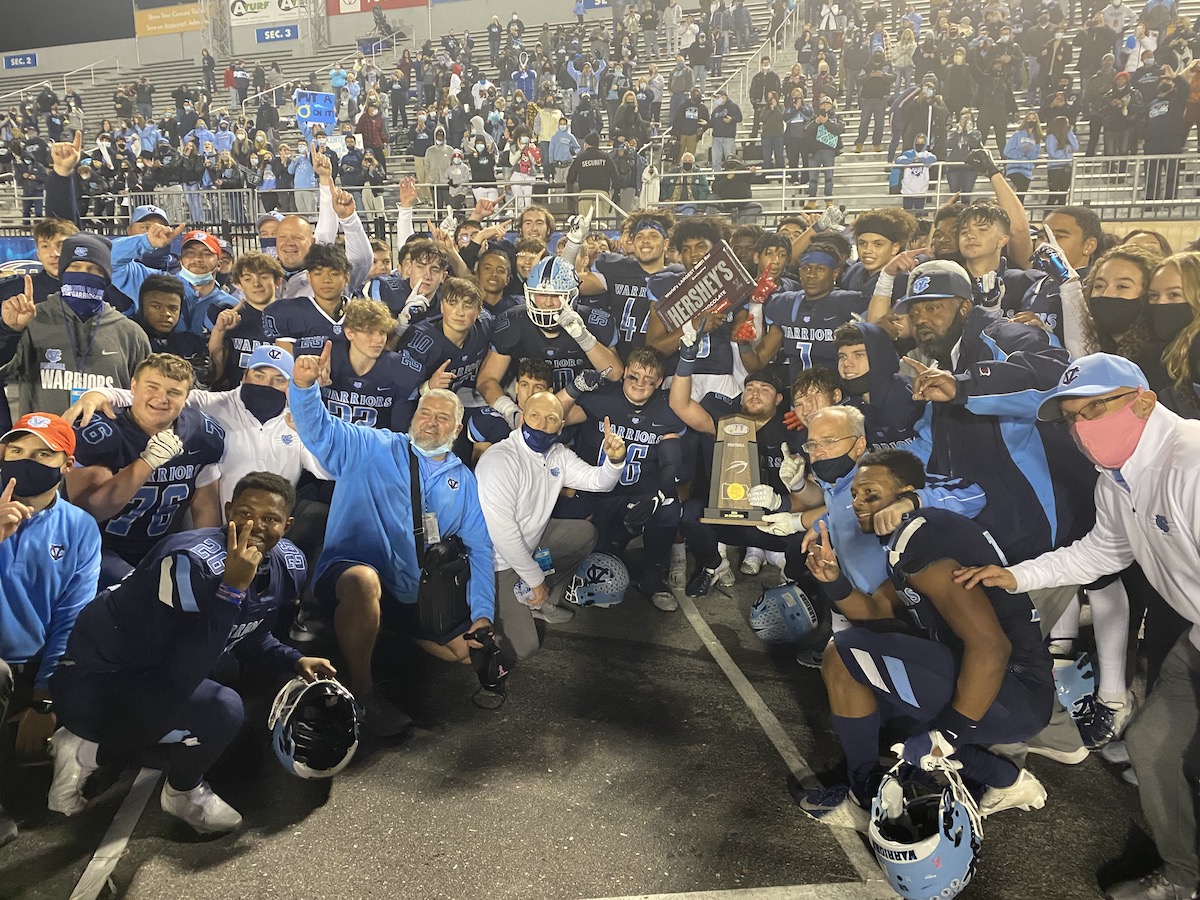 Under the deluge of mercy-rule victories, and an undefeated record stood Brandon Graham. The 6-foot, 195-pound Central Valley senior was easy to lose in the Warriors’ grand quest of winning the school’s first PIAA state football championship.

The starting point guard for the basketball team, Graham was convinced by his pals to play football his senior year for the first time since seventh grade. When a couple of the Warriors’ defensive backs went down a few weeks ago, Graham’s role increased further to a whole new station as a safety—a position he never played.

So, naturally, Graham played a vital role in Central Valley winning its first state title, intercepting two passes and coming up with a key third-down reception in leading the Warriors to a 35-21 victory over District 3 champion Wyomissing Area Friday night at Hersheypark Stadium in the PIAA Class 1A championship.

The Warriors put the exclamation point on their historic 12-0 season, winning 11 of their 12 games by mercy-rule and finding Graham.

Two weeks ago, when junior Bryce Wilson was injured, the Central Valley coaching staff handpicked Graham to start in his place. Graham got some reps in the Warriors’ state semifinal victory over Bedford. But he was still feeling his way at safety.

“I played cornerback in grade school, but I never safety,” said Graham, laughing. “I play point guard in basketball, so I catch on to things fast. I just got in my zones and being a ball hawk.”

Trailing 14-7 at halftime, Central Valley used the first play of the third quarter to tie it, 14-14, on Landon Alexander’s 18-yard touchdown run off the right side. The score was set up by a Bret Fitzsimmons’ 36-yard kickoff return to open the second half.

The Warriors took the lead for good on their second drive of the third quarter, going 80 yards over eight plays. The big play of the series was a 41-yard, over-the-shoulder, diving catch by Akron-bound Myles Walker, which brought Central Valley to the Wyomissing 27. Four plays later, the Warriors bolted ahead, 21-14, on an Amarian Saunders two-yard run with 6:14 left in the quarter.

But Central Valley did not help itself. The Warriors were flagged three times in the third quarter for unsportsmanlike penalties and one personal foul. The personal foul came on the last play of the third quarter, on a third-and-18 play when it looked like the Central Valley defense would get off the field after Spartans’ quarterback Zach Zechman was hit late out of bounds.

The Spartans, however, were fortunate to shut down that Wyomissing chance when Graham intercepted the first of two Zechman fourth-quarter passes.

Central Valley turned the Graham pick into Saunders’ second touchdown and a 28-14 lead with 7:18 left to play.

Though just when the Warriors thought they were on the way to their first state championship, Wyomissing’s Jordan Auman put a temporary damper on the celebration by going 77 yards with the ensuing kickoff for a touchdown with 7:04 remaining.

That score set up the play of the season.

With the momentum of the game in the balance, Warriors’ Harvard-bound quarterback Ameer Dudley rolled right and hit Graham with a 14-yard pass on third-and-7 from the Central Valley 37.

The first down extended the drive and drained the clock, setting up Alexander’s game-clinching four-yard TD run with 2:32 left. The score was helped along when Wyomissing jumped offsides with 2:37 left, and Central Valley sitting at the Spartans’ 9 on fourth-and-two.

At halftime, Wyomissing had Central Valley in an unusual spot for the first time this season, trailing at intermission, 14-7.

The Spartans scored on their first two possessions, when senior Aidan Cirulli booted first-quarter 40- and 44-yard field goals. The Spartans used a time-draining, ground attack, holding the ball for 16:12 of the first half (to 7:48 for Central Valley) and ran off 34 plays to Central Valley’s 20.

The Spartans slammed Central Valley for 88 yards rushing in the first half, and more importantly they converted 5 of 9 third-down attempts and were 1-for-1 on fourth down.

Central Valley’s first score came on a fourth-and-13 play at the Wyomissing 17, which resulted in a Jayvin Thompson touchdown reception.

Other than that, Wyomissing kept Central Valley’s superior speed in check, simply by keeping the Warriors’ offense off the field.