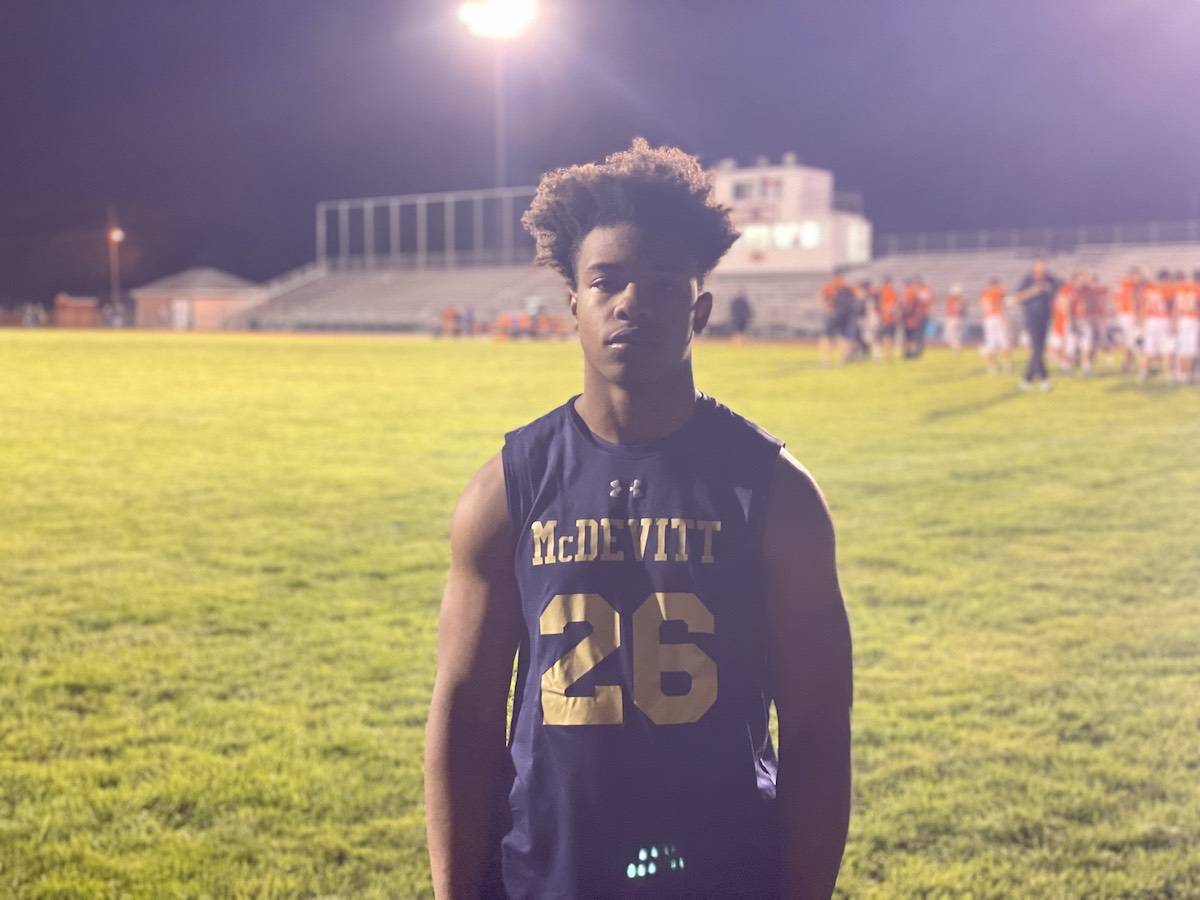 Bishop McDevitt started the game flat with a multitude of penalties and allowed Palmyra’s defense to get pressure on the quarterback.

In the end, the Crusaders cruised to a 49-3 Mid Penn Keystone victory as their stellar stash of playmakers proved to be too explosive for the Cougars to contain Thursday night at Buck Swank Stadium.

The big win is nice but getting the penalties under control is something that will need to be cleaned up if the Crusaders (1-0, 2-1) wish to make it back to and win the PIAA Class 4A title game, which it narrowly lost 34-27 last season against Aliquippa.

The Crusaders finally responded with a 12-play, 80-yard drive that was capped with an 11-yard touchdown on a nice slant route by Tyshawn Russell and a bullet pass from sophomore quarterback Stone Saunders.

And now the good for Bishop McDevitt: Minnesota commit Marquese Williams and a stout defense.

After the Crusaders’ defense forced a three-and-out, yet another penalty backed them up to their own 6. Williams had enough and dashed 94 yards down the left sideline to make it 14-3 with 1:31 left in the quarter. It opened the floodgates.

“Basically I’m trying to stay sharp and perform so I can showcase my skills,” Williams said about what he is trying to accomplish this season after already having his commitment taken care of. “I gotta continue to showcase my skills for who I’m committed to. I just come out here, make sure I execute, and have a good relationship with my lineman because they’re a big part of that execution.

“I really don’t focus on the committed part. I focus more on McDevitt and the team because we want to win a state championship. Obviously we got to clean up the penalties and all that but we’ll be straight.”

Williams then scored on runs of 43 and 9 yards in the second quarter to expand the lead to 28-3. The senior running back had 194 rushing yards and three touchdowns in the first half.

It’s arguably Williams’ most prolific first half as a Crusader up there with his 137-yard, four-touchdown first half last season against Lower Dauphin.

His 9-yard touchdown run was set up by fellow back Cyncir Bowers’ 71-yard run. Bowers has offers from Bowling Green, Fordham, Long Island, Monmouth, North Carolina A&T, Old Dominion (where former McDevitt WR Mario Easterly currently plays and which just beat Virginia Tech), and Richmond. Bowers is one of the many lethal playmakers on the Bishop McDevitt offense.

“It helps out a lot,” Williams said of having another talented player in the backfield with him. “It takes off the pressure. It’s good to have that second person to dominate with me by my side. He’s a pretty good back. We don’t hate on each other. We feed off each other.”

McDevitt defensive back Chase Regan then picked off an Ethan Lodish pass and returned it for 44 yards to make it 35-3. James Madison commit Riley Robell had a sack for the Crusaders on the next possession to help force another three-and-out. Then three straight passes from Saunders to Cyncir Bowers gained 38 yards and Bowers pounded it in the end zone from the 2. It was 42-3 with 45.3 seconds left in the first half.

Neither team scored in the third quarter with the running clock in effect.

Rico Scott, who has offers from a medley of Division I you-name-its, got into the scoring action with a 28-yard touchdown reception off a shuffle pass on a jet sweep to conclude the scoring for the game just 9 seconds into the fourth quarter.

McDevitt finished with over 15 penalties totaling over 150 yards. The defense totaled 14 tackles for a loss and held the Palmyra offense to 30 total yards.

The Crusaders have rebounded after a Week 1 loss to Imhotep with a 56-7 win over La Salle and this win. Their Week 2 game against West Toronto Prep was scrapped due to COVID. Next up: Cedar Cliff at home next Friday.