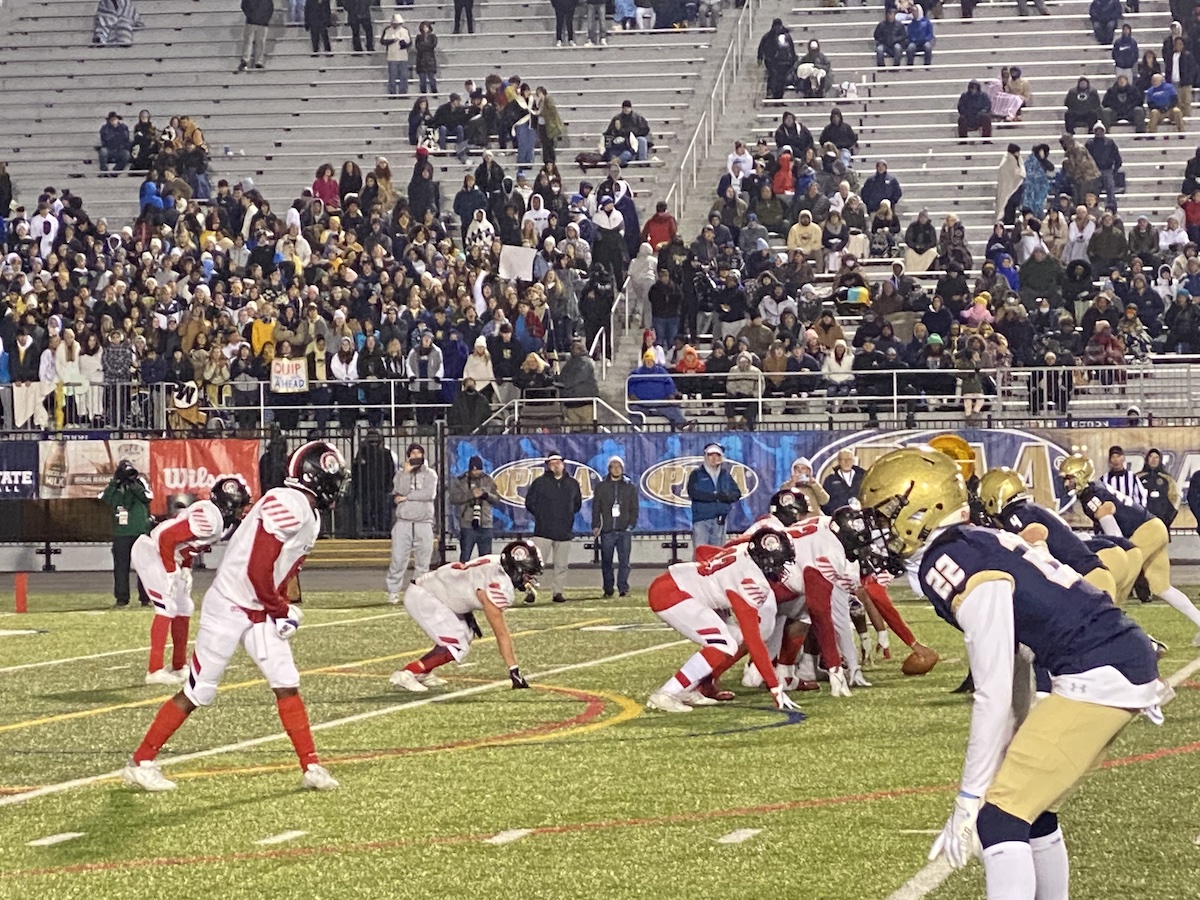 A freshman willed his team to victory in what amounted to the biggest game for every player on the field up to this point in their careers in the PIAA Class 4A championship Thursday night at Hersheypark Stadium.

Tiqwai “Tikey” Hayes rushed for 139 yards and three touchdowns, and also picked up a crucial first down by a hair, to lead Aliquippa to a 34-27 victory over Bishop McDevitt for its second PIAA championship since 2018.

The WPIAL champion Quips (13-1), a 1A school enrollment-wise, won their 12th game in a row and handed the District 3 champion Crusaders (12-2) their second loss of the season.

The PIAA’s “Competition Formula” could force the Quips into 5A in 2022, but that’s a story for a little bit later.

Aliquippa and Hayes, who picked up an offer from Penn State a few weeks ago, ran behind an athletic, gargantuan offensive line and tallied 225 yards on the ground while the Crusaders only mustered 50 rushing yards. Hayes’ fellow back John Tracy rushed for 78 yards and a score.

“They’re just big guys,” Hayes said about his offensive line. “There’s a full five of them like I don’t know what you can do about them. If I didn’t have them I’d be getting stuffed every play. And they’re fast. It’s crazy.”

Just as importantly, the beef along the line translated to the defensive side of the ball as the Quips neutralized the Crusaders’ talented running back duo of Marquese Williams (12 carries for 38 yards) and Cyncir Bowers (3 carries for 14 yards).

But it wasn’t all fun and games for Aliquippa as the big plays from Bishop McDevitt’s stable of playmakers kept it in the game.

The Crusaders came out on fire, scoring just 55 seconds in when freshman QB Stone Saunders, who has offers from Maryland and Michigan, hit Old Dominion commit Mario Easterly for a 59-yard touchdown on a drag route that Easterly took to the house.

The Crusaders recovered their own ensuing kickoff at the Aliquippa 27 and Williams ran it in from 16 yards to finish the drive. Bishop McDevitt led 13-0 just 2:13 into the game.

The Quips then got to work behind the offensive line and Hayes burst for a 42-yard score with 5:57 remaining in the first to make it 13-7.

Sophomore backer Cameron Lindsey got his mitts on a Saunders pass on the next drive and returned it for a 29-yard touchdown, giving the Quips their second score in 58 seconds and the lead at 14-13.

Saunders hit Kamil Foster for a 55-yard strike 1:01 into the second quarter and the Crusaders regained the lead.

Tracy finished a drive with a 2-yard gash with 5:16 left in the half to tie it 20-20, which would hold as the halftime score.

Aliquippa embarked on another drive toward the end of the third quarter and faced a 4th-and-7 from the Bishop McDevitt 26-yard-line. The Quips went for it and quarterback Quentin Goode made an incredible throw to Cyair Clark, who made an incredible catch at the 4.

The Crusaders, notably a huge stick by linebacker Ryan Russo on second down, held firm and forced another fourth down. The Quips converted again as Hayes pounded it in from the 1 to make it 27-20 on the first play of the fourth quarter.

Hayes added his third touchdown from 8 yards out with 9:21 left in the game after a big catch-and-run from Clark, who finished with 75 receiving yards.

The Crusaders didn’t back down as Saunders hit Williams, who tiptoed down the sideline, for a nifty 18-yard touchdown with 3:02 left to make it a one-possession game at 34-27.

On the final drive, the Quips faced a 4th-and-1 from the 43 with 2:36 left and Hayes picked up the first down by an inch, effectively ending the game as the Crusaders had used all of their timeouts.

Saunders finished with 237 passing yards and three touchdowns and Easterly had 126 receiving yards and the touchdown for the Crusaders, who continue their quest for their second state title and first since 1995.

“It was a great four years I had here,” Easterly said. “To be in a state championship my senior season was great. I had a fun experience all season. Just fell a little bit short. I’d love to win that, but we lost to a really good football team and we were even with them.

“We faced a good LaSalle team Week 1 and took a tough loss. Ever since then we were on a steamroll. We got better every week and made it to the state championship. Like I said things didn’t go our way. It’s alright; they have a lot of young talent coming back so hopefully, they can do it better next year.”

As previously mentioned, Aliquippa would be a Class 1A school based on its enrollment. The Quips success as a football program bumped them to 3A and eventually 4A. Now they’ll be headed to 5A after this state championship unless they win an appeal. So how do they stick with, and beat, these bigger schools with much deeper rosters?

“Hard work and a lot of conditioning,” Hayes said. “If we didn’t have our conditioning coach, I don’t think we’d be able to play with some of these guys. It’s all conditioning and it helps a lot.”

And where does Hayes, a state champion as a freshman, go from here?

“Keep moving forward,” he said. “Get a good offseason in. Chill, lift weights. Come back faster and better than I ever was.” 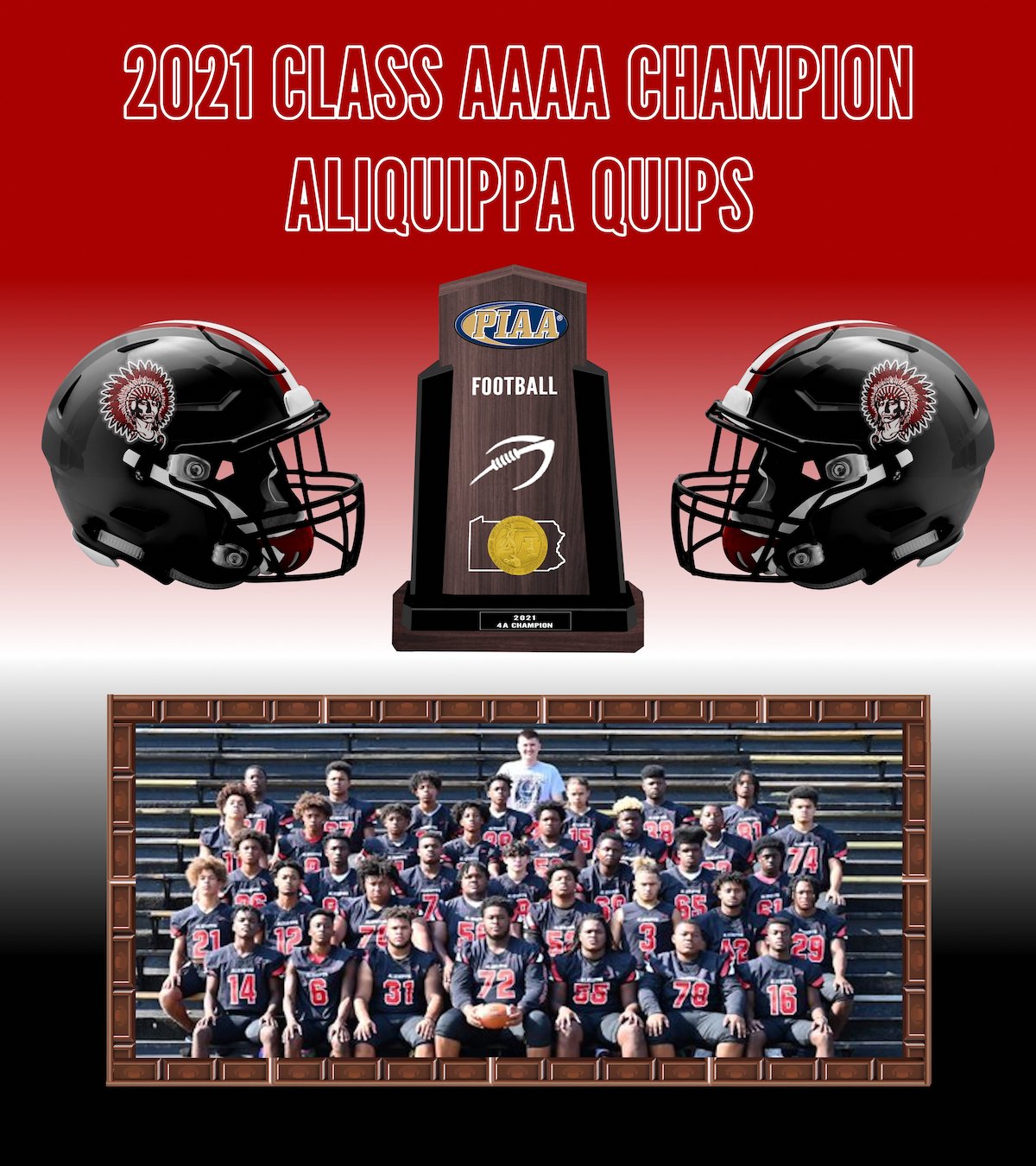