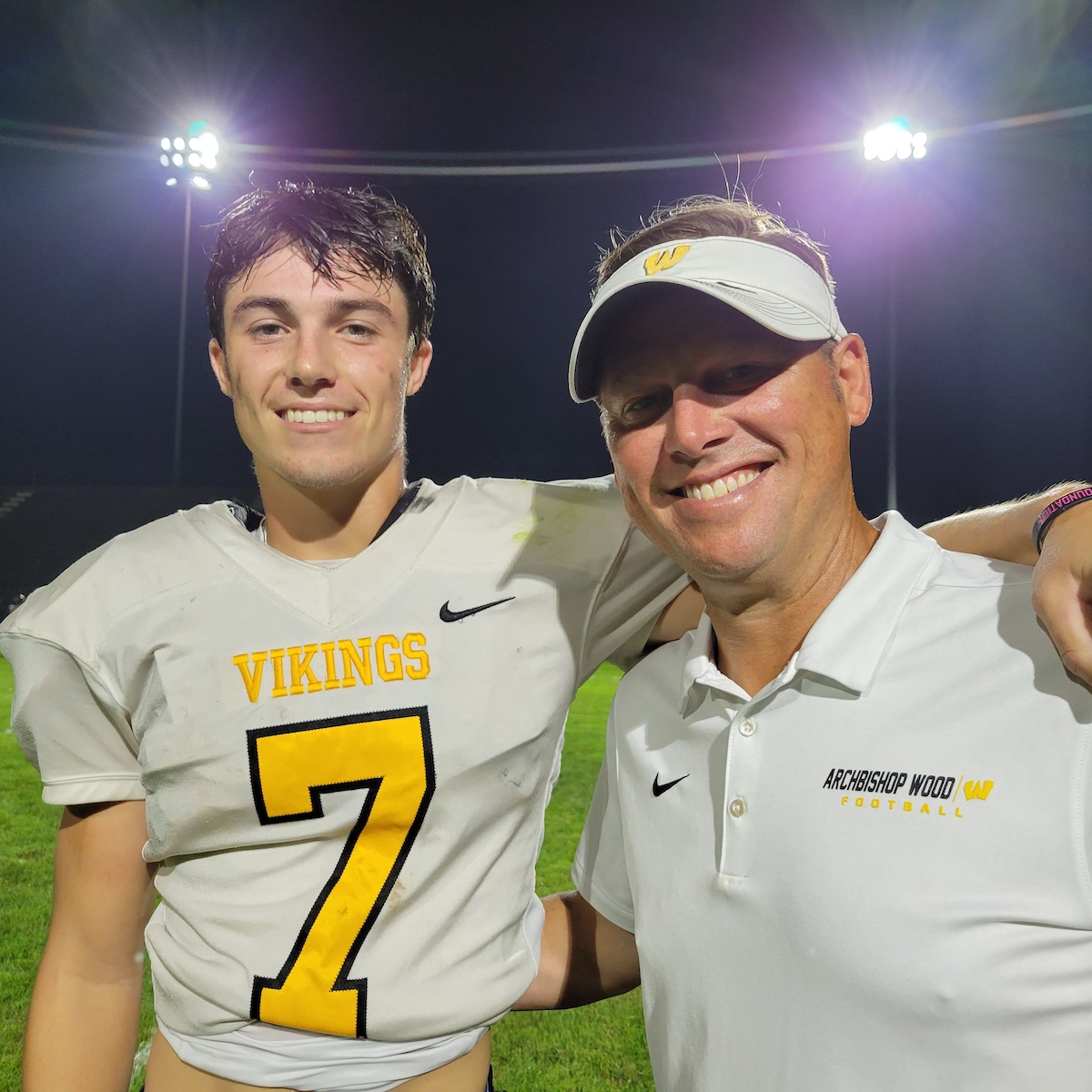 Andrew McHugh had to seek him out under the concrete Neshaminy stands Friday night. Minutes ago, the 6-foot-1, 190-pound Archbishop Wood senior defensive back returned an interception for 100 yards to close out the first half against Neshaminy, only to have the play called back for an illegal block.

McHugh could have been angry. He should have blown like a volcano. But he didn’t. He sought out his teammate who committed the penalty, patted him on the back, and told him, “No worries, we’ll get the next one.”

McHugh got the next one and then some. He had a career game with two interceptions and three touchdowns in leading Wood to a season-opening 37-0 victory over host Neshaminy.

McHugh scored on touchdown receptions of 8, 28, and 19 yards and had two interceptions, one at the goal line that would have been his fourth TD if not for the penalty.

“I was more tired than pissed after I returned (the interception for 100 yards and found out it was called back),” said McHugh, who is getting attention from Villanova, William & Mary, Georgetown, and Bucknell. “I got an opportunity. They’re putting the ball in my hands more this year. I had three interceptions total last year, and I think it could have been better.

“I think this says Wood is back, we’re ready and we’re coming out with energy every single play.”

The game was over by halftime, though Wood coach Matt Walp went into intermission livid. The Vikings scored on their first three possessions and went into the third quarter up, 23-0.

Wood quarterback Trey Holsman had completed six of eight passes for 109 yards, which included a 60-yard touchdown pass to Emmanuel Sia and an eight-yard score to McHugh.

Almost anything the Vikings wanted to do, they did. Freshman Leo Ricci booted a 23-yard field goal and Ricardo Delgado returned an interception for a 43-yard touchdown.

By halftime, Wood had a modest 162 yards of total offense, but the Viking defense allowed Neshaminy a scant 55 yards of offense.

“I thought Wood’s offense was good, but their defense is very, very good,” Neshaminy coach Steve Wilmot said. “I liked how our defense played. We have a lot of newcomers and I’m kind of excited about how our defense grows throughout the year.

“We’re missing some guys and we have some seniors, though a big corp of our team are juniors. This is a team that will grow. I expect us to get better every week.”

Neshaminy’s first three possessions resulted in a fumble, which was converted into the Ricci field goal; three-and-out, which was answered by Sia’s 60-yard TD reception and Delgado’s 43-yard pick-six.

What topped everything off was McHugh’s interception at the Neshaminy goal line on the last play of the half. The senior defensive back/receiver returned it 100 yards for what appeared to be a touchdown, but the score was called back for a Wood block in the back at the Neshaminy 45, which justifiably sent Walp into a frenzy going into halftime.

“I’m glad we were under the stadium at halftime because I didn’t want anyone to hear me, but everything you do on a football field is about discipline,” Walp said. “In the first game, you’re going to get some, but you won’t win many football games if you have that many penalties held against you. If we don’t clean that up, it will come back and bite us.”

Wood was flagged eight times for 80 yards. For the game, the Vikings were penalized 10 times for 105 yards.

McHugh made up for the TD he had taken away by intercepting his second pass in the third quarter, and later catching a 28-yard TD midway through the quarter for a commanding 30-0 Wood lead. McHugh closed the scoring with a 19-yard TD strike from sophomore Mekhi Wharton.

“Andrew is very special, he’s as good as it gets,” Walp said. “After Andrew saw the penalty, he came over and told the kid not to worry about it. He’s a special young man, and I’m happy the way our guys played in the first game of the season.”