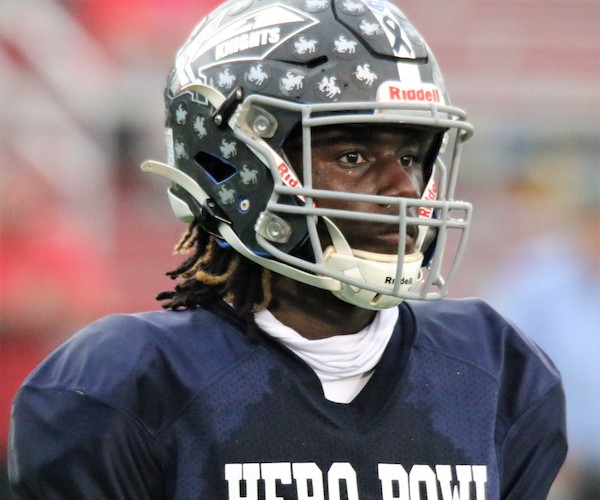 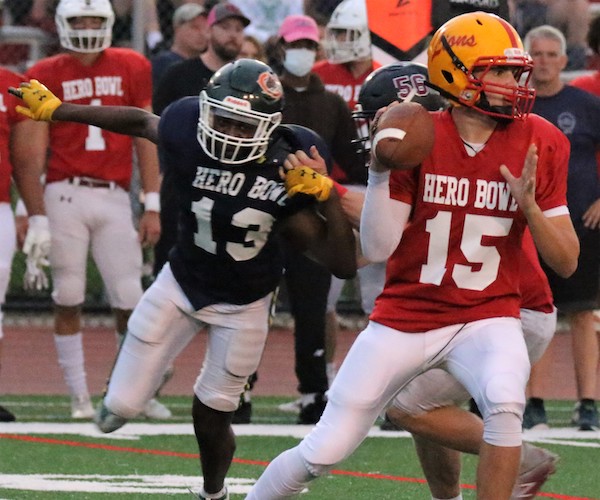 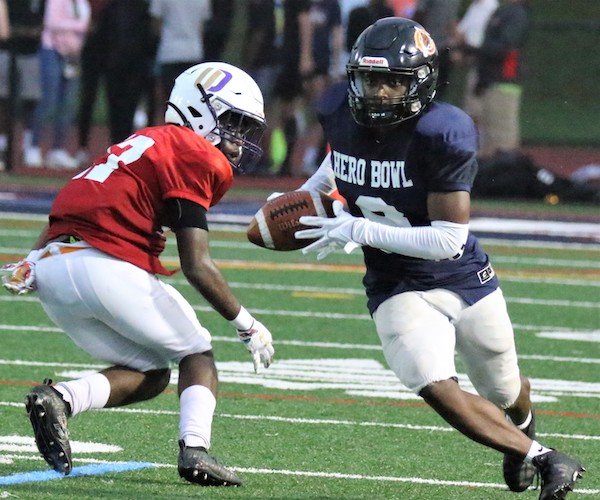 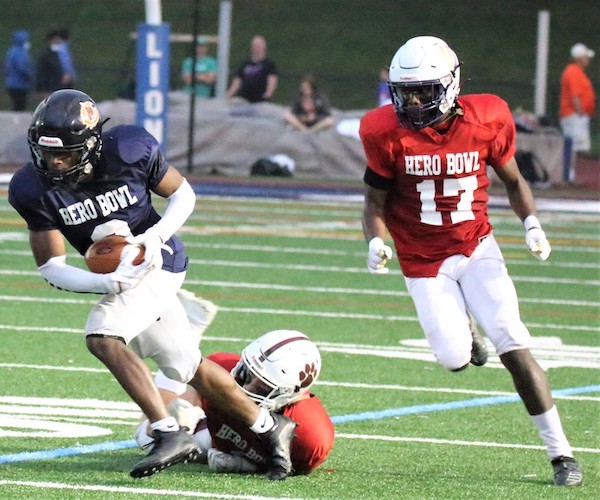 The chill in the air gave Delaware County’s 44th Hero Bowl a certain autumn tone. The crunching pads verified it.

Pride surfaced and the result was a great all-star game complete with the tension and emotion of a fall regular-season game.

The West prevailed, 16-12, Thursday night at O’Hara on a late Tahir Mills’ three-yard touchdown run with 2:10 left to play. Mills (Ridley) is heading to East Stroudsburg after a record-breaking season for the Green Raiders, topped up by winning his last high school football game.

“I’m ready to move on,” Mills said. “This was a great way to go out, playing in my last high school football game, and I’m really looking forward to starting college. But this was intense. We expected the (East) team to be really forceful. I’m glad we did it. There is a pride thing involved.”

After going down 12-0, the West responded with 16 unanswered points.

East coach LaDontay Bell (Chester) threw some excitement into what had traditionally been a stodgy game—schematically. He made it a fun affair, throwing in wildcats, a fake punt, a double reverse, and an onside kick.

All in the first half.

To anyone’s recollection who have seen plenty of Hero Bowls, no one saw what Bell’s East team did in any previous Hero Bowl—let alone in one half.

The East went into halftime with a 12-7 lead, thanks to a pair of Isaiah Freeman-to-Eric Wills touchdown passes.

“I wanted to win this game—I like to win every game I play,” said Freeman, who will go to Lincoln University. “We wanted to try and come out aggressive early, and get up early and we did. We just couldn’t hold it. We took our foot off their necks a little bit and let them back in.”

The first scoring pass came off a nifty double reverse when Freeman hit a wide-open Wills for an 80-yard touchdown pass with 2:30 left in the first quarter. The play was put together incredibly well, especially considering this was an all-star game with very little time to practice the play and put it together.

“This was intense, they were more disciplined in the end than we were,” said Sanogo, who will go to California University of Pennsylvania. “That was the difference. Everyone’s heads were going different ways, and they came together more as the game wore on. But this was a great experience. It was fun to play in this game.”

With 6:57 left in the first half, the Freeman-to-Wills connection struck again. Freeman stepped back and threw a perfect arcing pass that Wills ran under for a 37-yard scoring pass and a 12-0 East lead.

After a failed onside kick attempt, the West answered with a short drive, which culminated in a Heller 18-yard touchdown pass to a wide-open Tommy Caruso (Haverford) with 1:56 left in the half. The score came on a blown coverage and was helped along with a pass interference penalty.

By halftime, Freeman had thrown for 143 yards, while Wills had three catches for 118 yards.