Tigers Come Back to Beat Panthers 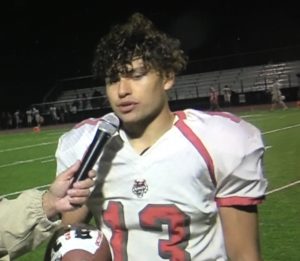 In front of a huge home-coming, Wall-of-Fame introduction crowd, the Schuylkill Valley Panthers opened Friday’s game in Leesport with the momentum of two consecutive 70-point games. That momentum helped spark a quick 14-0 lead less then five minutes into the game behind the efforts of a 14-yard touchdown run from Reinhold Louis and a 58-yard touchdown pass from Nicco Iaccarino to Michael Knowles. The first touchdown was set up by a blocked punt by the Panthers Carlens Lapaix.

Schuylkill Valley looked in control of the game with 7:34 remaining in the first half, when Coach Jeff Chillot used a 4th down spread formation to run a rugby style punt which rolled out of bounds at Fleetwood’s one yard line. However, the Tigers quickly went 99 yards in seven plays, capped by a seven yard touchdown run by Christian Moreno. The big play was a 58-yard scramble and run by quarterback Charlie Maddocks. The PAT kick was blocked and Fleetwood pulled to within 14-6.

On the ensuing drive, the Panthers failed on a 4th down attempt at Fleetwood’s 36 yard line. The Tigers then drove 64 yards on 6 plays finished by a 6 yard run by Maddocks. The 2-point conversion failed and Schuylkill Valley still led 14-12 heading into halftime.

The Panthers opened the second half scoring when Iaccarino hit Luke Ammarell for a 5-yard touchdown pass. The extra point gave them a 21-12 lead with 6:40 remaining in the 3rd quarter. That’s when Fleetwood Coach Sean Gaul told his offensive linemen, “Control the line of scrimmage and dominate the guy across from you”. The Tigers quickly drove 63 yards on 5 running plays and scored on Moreno’s 31-yard touchdown run. The extra point was blocked for the 2nd time in the game, and the Panthers lead was trimmed to 21-18.

Fleetwood took its first lead of the game with 9:37 remaining by driving 65 yards in 8 plays capped off by a beautiful 27-yard pass from Maddocks to his brother Owen. A successful 2-point try gave the Tigers a 26-21 lead they would not relinquish.

The final score of the game came when Fleetwood went 85 yards in eight running plays. Moreno ended that drive by going the last 34 yards untouched for the touchdown. The 2-point attempt failed, and the Tigers led 32-21.

The Panthers made an effort to get back in the game when they drove eleven plays and were into Fleetwood territory, but a 4th down pass attempt fell incomplete. The Tigers took possession and ran out the clock to end the game.

Fleetwood ran the ball 59 times and gained 479 yards on the ground. Christian Moreno led all runners with 231 yards on 27 carries, and three touchdowns. He didn’t take credit for his effort as he said, “This win was all by the defense. The offense just did enough”. Gaul said of Moreno, “He’s our finisher. Plane and simple”. Ben Leister also had a big game for Fleetwood by rushing for 117 yards on 11 carries.

The Tigers (1-1, 6-1) look for another win next Friday when they host Hamburg.

Schuylkill Valley (1-1, 3-4) hopes to get back in the win column when they host Berks Catholic next Friday. 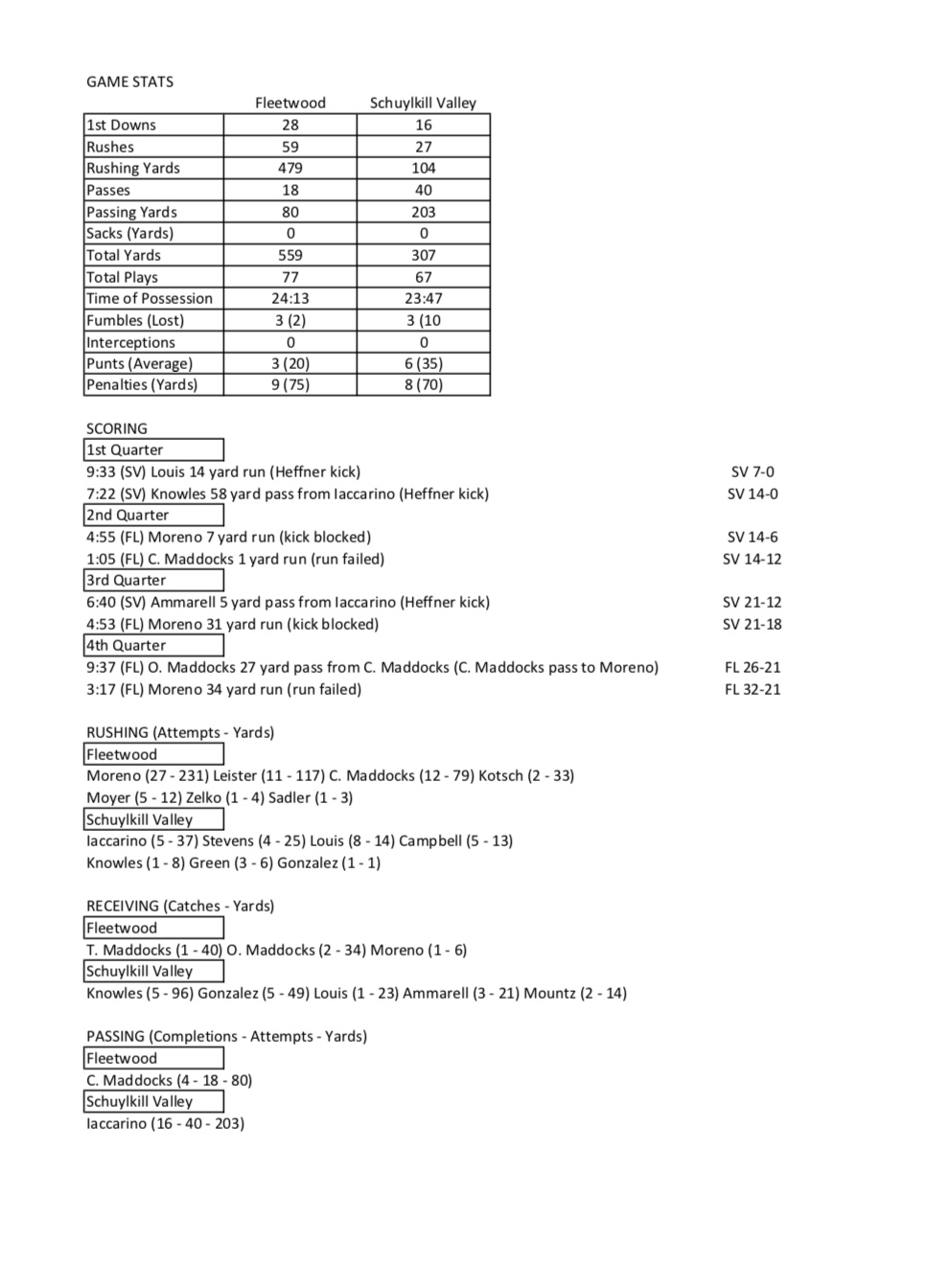