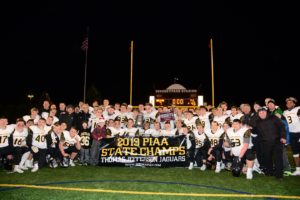 HERSHEY – Thomas Jefferson’s Shane Stump rushed for four touchdowns and passed for one in a 46-7 win over Dallas in a PIAA Class 4A Championship game Thursday night at Hersheypark Stadium.

After a scoreless first quarter, the Jaguars got on the scoreboard Stump eluded a sack and threw a 28-yard touchdown pass to Daniel Deabner for the score. Dylan Sullivan’s kick was good. Thomas Jefferson led 7-0.

The Jaguars went up 13-0 on a Stump 14-yard run. Dallas’ Matt Maransky blocked the extra point with 6:12 left in the first half.

They weren’t done scoring in the second quarter. A Stump to Deabner pass for 21 yards set up a Dylan Mallozzi two-yard touchdown run with 33 seconds left in the half.

The Jaguars wasted no time adding to their lead. Ian Hansen intercepted a pass and went 29 yards for the score. The kick was no good and TJ led 26-0.

Stump scored the next three times. He had runs of 6, 1 and 1. Early in the fourth quarter, Thomas Jefferson led 46-0.

Dallas scored the final score of the game. Danny Meuser went in from 26 yards out.

Dallas running back Lenny Kelley came into the game with 2,623 yards rushing and was held to 37 yards rushing on 14 carries. The District 2 Champs finished the season 15-1.