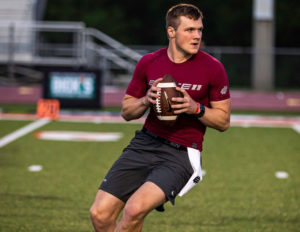 The award, which recognizes not only outstanding athletic excellence but also high standards of academic achievement and exemplary character demonstrated on and off the field, distinguishes McCord as Pennsylvania’s best high school football player. Now a finalist for the prestigious Gatorade National Football Player of the Year award to be announced in May, McCord joins an elite group of past state football award-winners, including Emmitt Smith (1986-87, Escambia High School, Fla.), Matthew Stafford (2005-06, Highland Park High School, Texas) and Christian McCaffrey (2012-13 & 2013-14, Valor Christian High School, Colo.).

The 6-foot-3, the 212-pound senior quarterback passed for 1,582 yards and 21 touchdowns this past season, leading the Hawks (6-0) to the Class 6A state championship and a No. 4 MaxPreps national ranking. McCord completed 99 of 153 passes, throwing just one interception, and passed for 337 yards and four TDs in the state title game. The Class 6A, Philadelphia Catholic League, and Maxwell Football Club Player of the Year, he was selected for the 2021 All-American Bowl. McCord was named the High School Football America/National High School Coaches Association National Player of the Year.

McCord has participated in multiple service-mission trips to assist underserved communities. “Kyle McCord has a gifted arm and the football IQ to go with it,” said John Steinmetz, head coach at La Salle College High. “There isn’t a throw he can’t make, and his line of scrimmage adjustments are outstanding. I’ve been here 40 years and in my opinion he’s the best quarterback ever (to come out of) the city.”

McCord has maintained a 3.37 GPA in the classroom. He has signed a National Letter of Intent to play football on scholarship at Ohio State University this fall.

Through Gatorade’s cause marketing platform “Play it Forward,” McCord has the opportunity to award a $1,000 grant to a local or national youth sports organization of their choosing. McCord is also eligible to submit a 30-second video explaining why the organization they chose is deserving of one of twelve $10,000 spotlight grants, which will be announced throughout the year. To date, Gatorade Player of the Year winners’ grants has totaled more than $2.7 million across 1,117 organizations.

Since the program’s inception in 1985, Gatorade Player of the Year award recipients have won hundreds of professional and college championships, and many have also turned into pillars in their communities, becoming coaches, business owners, and educators.

To learn more about the Gatorade Player of the Year program, check out past winners or to nominate student-athletes, visit www.playeroftheyear.gatorade.com, on Facebook at www.facebook.com/GatoradePOY or follow us on Twitter at www.twitter.com/Gatorade.