PISCATAWAY, NJ — St. Joseph’s Prep is a team overflowing with talent. But 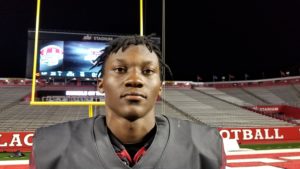 even the Hawks can’t overcome costly penalties and turnovers.

The Hawks (1-2) turned the ball over four times—two coming on their first possessions—and committed nine penalties for 72 yards. IMG (3-0) didn’t exactly help itself, either, committing 19 penalties for 180 yards.

“That is a team that you can’t make mistakes against and some of the things we learned in the first game I told the guys the same thing again,” Hawks’ coach Tim Roken said. “I know it hurts. But we have to keep learning by our mistakes and get better by them.”

Prep did make things interesting late when Hawks’ senior tailback Kobe Burrell scored on a 2-yard run with 2:52 left to play to make it 31-25. But Prep’s tired defense bent in the second half and couldn’t get the ball back.

There were plenty of positives to take against one of the premier high school football programs in the country.

For one, junior receiver Sahmir Hagans singlehandedly kept the Hawks in the game during the first half. His 11-yard TD reception and explosive 98-yard kickoff return gave The Prep a 12-10 halftime lead.

“We harmed ourselves with little penalties and getting into a chatter with the other team,” said Hagans, who caught six passes for 52 yards. “We have to play our game and keep our heads. We beat ourselves in that one.

“That’s a top-five team in the country, and if we fix our mistakes, we win that game.”

By the 8:17-mark of the third quarter, IMG had been nailed for 11 penalties for 100 yards. After the quarter, the Ascenders had amassed 135 yards in penalties, but they also had the lead, 31-18, when Ari Allen hauled in a 14-yard pass from DJ Boney in the corner of the end with 4:37 left in the quarter.

One minute later, IMG was up 24-12, after Camden’s Corey Palmer hauled in another Boney 14-yard scoring pass. Prep junior quarterback Kyle McCord took a four-yard sneak into the end zone, which was immediately answered on IMG’s next drive, ending in Kaytron Allen’s 63-yard TD run with :09 remaining.

Other than the McCord TD run, the Hawks couldn’t sustain anything offensively in the third quarter. That had an effect on the defense, which appeared exhausted. Allen weaved his way through the fatigued defense for a 63-yard score, and the play before that, the Hawks couldn’t pull down Boney, who escaped to hit Palmer with an 18-yard reception.

The Hawks didn’t help themselves on their first two drives. Junior Grant Miller intercepted McCord on the second play of the game, but the Hawks held strong, thanks to a pair of tackles by Jeremiah Trotter Jr.

The first Hawks’ turnover resulted in an Erickson Buck 33-yard field goal with 9:02 left in the first quarter.

On the Hawks’ second drive, McCord lost a fumble and Miller again was there to scoop up the turnover. This time, St. Joe’s Prep held, when the Ascenders failed on a fourth-and-goal from the Hawks’ six.

The Prep offense didn’t really start going until early in the second quarter. But the Hawks were helped greatly by a fumble recovery by junior defensive tackle Nick Yagodich’s fumble recovery at the IMG 43 with 9:46 left in the half.

From there, McCord found a rhythm and ended a 1-minute, 14-second, five-play drive when he hit Hagans slanting in for an 11-yard touchdown pass with 8:41 left in the half and a 6-3 lead.

After a slow offensive performance by both teams, special teams took over.

First, IMG junior Dekel Crowdus showed great speed in breaking through a crease in Prep’s punt return for a 92-yard TD return and a short-lived 10-6 lead. That’s because Hagans erupted again, taking the ensuing kickoff 98 yards for his second TD and a 12-10 Prep lead at the half.

Neither team was able to do much offensively in the first two quarters.

Prep had amassed 88 yards of offense, two turnovers and was flagged six times for 37 yards.

“There is some stuff that we have to clean up on our side,” said Trotter, who again showed why he’s among the best players in the country, committing to Clemson last week. “We could have won this game. We’ll watch tape and be ready for the Catholic League season.

“We were a little worn down late, but we kept pushing through. It shouldn’t have led up to them kneeling on the ball in the end. It should have been a lot closer than that.”