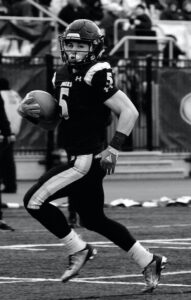 In the final game in 2A, he took over the state championship game rushing for 217 yards, three touchdowns, 98 yards receiving and a touchdown. Every time Wilmington scored, Garcia had an answer. He had runs of 1,89, and 74 yards including a 65-yard touchdown pass.

Only a Junior, look for Garcia and the Tigers to make another run to Hershey in 2021.