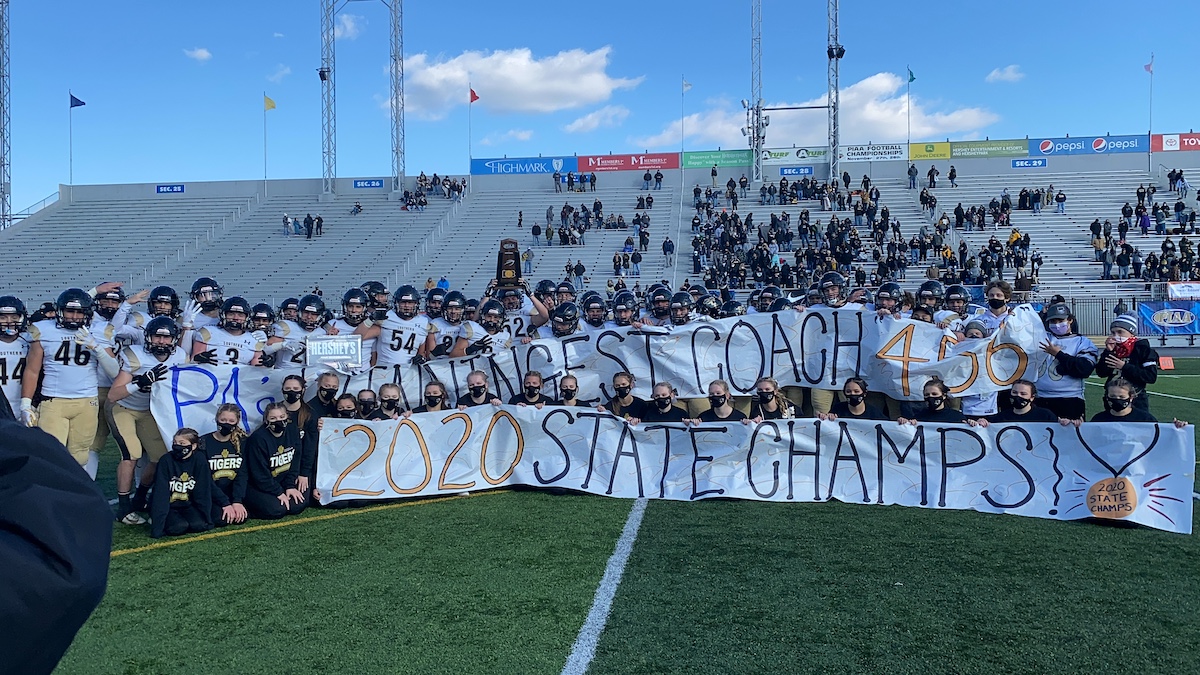 Nothing lasts 37 years anymore. Nothing. Concrete football stadiums decay. Bronze monuments tarnish in time. Yet, in Southern Columbia, Jim Roth keeps going to practice every afternoon. He’s been doing it for close to four decades.

The high school coaching legend does it based on a simple tenet: He likes what he’s doing.

Roth likes it so much no one ever in the history of Pennsylvania state high school football has done what he achieved on Saturday, winning a state-record 456 victories in his 37th year as a head coach, breaking the old mark of the late legendary Berwick coach George Curry, who accrued 455 coaching victories over 46 years.

The record-breaking victory could not have on a larger stage than Saturday’s PIAA Class 2A state championship, which Southern Columbia captured for the fourth-straight time with a 42-14 victory over District 10 champion Wilmington at Hersheypark Stadium.

Southern Columbia won its 11th state championship (Roth is 11-8 in state title games) and extended its winning streak to a state-high 60-straight victories.

The Tigers were once again powered by all-everything junior tailback Gavin Garcia, who rushed for a game-high 217 yards on 13 carries, scoring four touchdowns and catching three passes for 98 yards.

Size, nor anything else, was about to get in the way of Roth grabbing the state record.

Roth implemented a game plan and he expected his team to follow it, as it always does.

But what motivates anyone to do something for 37 years?

“I like what I do,” Roth explained rather simply. “It’s something I enjoy. I started as an assistant in 1980 and in 1984 I took over as a head coach. I always looked at it one year at a time. People would ask if I thought I would accomplish this many wins, or a state record in wins or whatever? I would tell them that I’m always the one who looks at the task at hand.

“Myself and our staff are that way. They never wavered. They never dropped off, even after all those good players that we had the previous three years. We coached those players like they had to still had to prove themselves.

“That’s been a real key to our success. We’ve been able to keep the kids hungry. Kids can get complacent, but our staff has been able to keep them on track. It’s not about the number of wins. I’m actually kind of glad the school did most of the honor stuff when the record was tied, because it wasn’t as involved.

“To be honest, I’d rather not have the recognition for most wins. It’s part of football, where there are so many moving parts and there are so many people involved. Obviously, if you’re the head coach, they’re going to pin those wins on you. But it’s about the program and being blessed to have the dedicated coaches that I have had, and the kind of kids and the community support that we’ve received over the years.”

Southern Columbia never trailed, but the Tigers were temporarily threatened.

With 4:17 left in the third, Wilmington’s Caelan Bender hauled in a 17-yard touchdown pass from Mason Reed to pull the Greyhounds to within 21-14.

The Tigers responded by scoring 21 unanswered points, starting with the ensuing drive. Southern Columbia needed just three plays to gather some cushion when Garcia ripped 74 yards for a TD in putting Southern Columbia up by two scores once again, 28-14, just 55 seconds later.