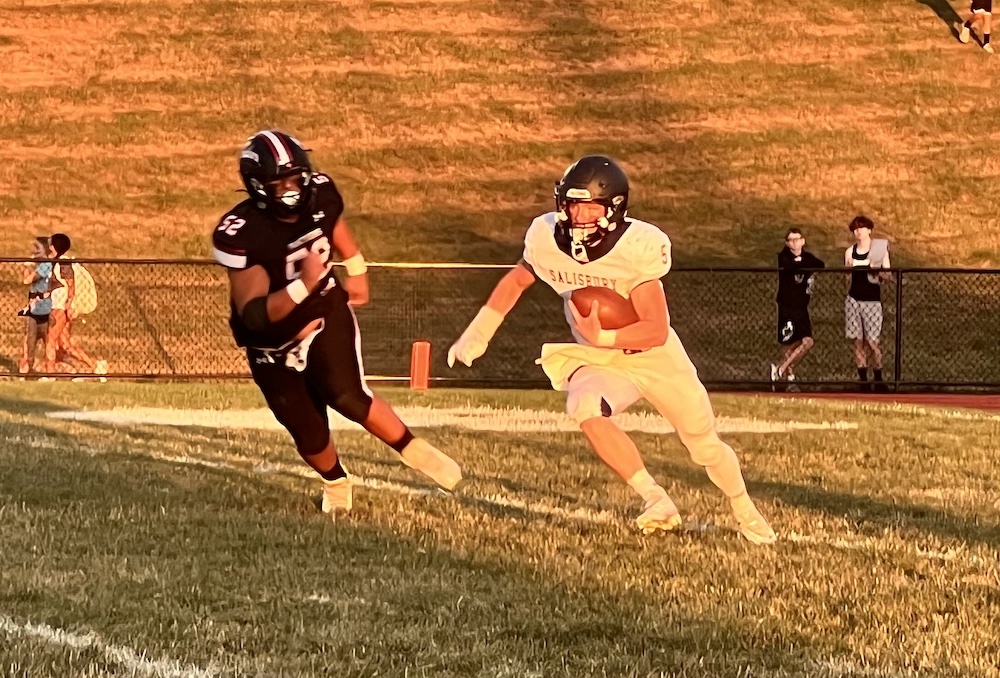 A dominant second half gave Saucon Valley their first win of the season, 27-7, as the Panthers scored 27 unanswered points to defeat Salisbury at Saucon Valley Stadium Friday night.

The game was a seesaw battle of wills in the first half, the Panthers came up empty twice inside Salisbury’s five. After a scoreless first quarter, Salisbury got on the board first when Josh Brooks took the handoff and went 48 yards for a touchdown. Lucas Graver’s kick gave the Falcons a 7-0 lead.

Things got really interesting with 7:23 left in the third quarter. Saucon Valley had the ball facing a third down and 11 on Salisbury’s 32 when the Athletic Director stepped on the field to talk to the refs. The game was stopped due to a low-flying drone. Both teams went into the locker room.

“It’s a PIAA rule, there are no-fly zones at football games,” said Athletic Director Bob Frey. “The protocol is to get the players and coaches off the field until it’s deemed safe.”

After a 30-minute delay, the game continued with the Panthers facing a third down play. On the first playback, Riefenstahl’s pass was picked off by Salisbury and they take over on their 47.

After a three and out and a punt, Saucon Valley drove right down the field. The key play was a Riefenstahl pass to Alex Magnotta for 27 yards to the Salisbury two. Tyler Pfizenmayer went in from two yards out. They led 14-7 with :29 seconds left in the third quarter.

The Panthers’ defense forced another Salisbury punt which was blocked by Josiah Hernandez. Jared Rohn picked the ball up and ran to the Salisbury 20 with 8:16 remaining in the game. To set up the next score, Joshua Torres had a 24-yard run to the one. Pfizenmayer once again found pay dirt. He went in from one yard out. The Panthers extended their lead making the score 20-7.

On the Panthers’ next drive, the same result. Pfizenmayer broke free from the pile and darted 57 yards for the score. The three-touchdown performance by Pfizenmayer led the Panthers to the win. Next week, Saucon Valley travels to Wilson Area while Salisbury plays at Jim Thorpe.