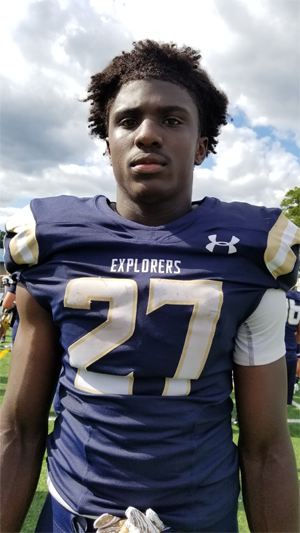 Brown is a sophomore, by the way the La Salle tailback moves past, through and over defenders. The 6-3, 185-pound Brown is already garnering college attention, and that should only grow, especially after the kind of game Brown had Saturday against a very good Malvern Prep team.

For the second-straight week, Brown picked up more than 150 yards from scrimmage and scored twice in powering La Salle to a 24-13 victory over Malvern Prep, which was playing without junior starting quarter Lonnie White.

The Explorers continue to show that they’re one of the top 6A teams in the state, moving to 3-0, while Malvern Prep dropped to 0-2.

Brown continues to show his versatility, scoring on a 39-yard reception and coming through with the play of the game, a 74-yard touchdown run on the first play of the fourth quarter that gave La Salle the lead for good, 17-13.

“Malvern is a really good. We started slow, and our defense stopped them. We were able to pick it up in the second half.”

Malvern was without White, who suffered a concussion in the Friars season opener and was in concussion protocol. So, Friars coach Dave Gueriera started freshman Bryce Pippin.

It was a trying introduction. Pippin was facing one of the best defenses in the state, and there was plenty of trial-and-error at the outset.

The Friars had minus-3 yards of total offense by halftime, and didn’t achieve its initial first down of the game until the last three minutes of the third quarter.

However, Pippin had the poise to give Malvern a brief 13-10 lead late in the third quarter, set up by a 53-yard completion to Kellen Mathias. Four plays later, Pippin snuck into the end zone and the Friars were up, 13-10.

After La Salle took possession of the ensuing kickoff, that edge ended. Brown zipped down the sideline 74 yards past everyone on the first play of the fourth quarter. On the next drive, the Explorers’ Brad Vespe plunged into the end for a one-yard score and a 24-13 with 6:29 to play.

“This was Bryce’s first start and I thought he battled really well,” Gueriera said. “We lost, but this game we proved to ourselves that we are a good team. We fought really hard, and with a young QB, you’re going to take some lumps early on.

“I was happy with out effort. We stood on our head defensively in the first half and made some key stops.”