A bend, don’t break defense, and a rushing attack that accumulates 305 total 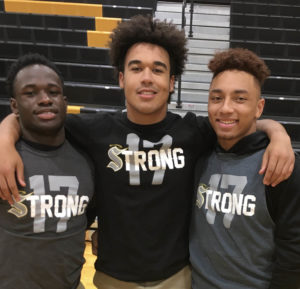 yards, led the Berks Catholic Saints to a 14-7 victory over the Gettysburg Warriors in the quarterfinal round of the District III 4A tournament.

In typical playoff football, defense and a ground game were key factors in being successful.  Friday night’s game at Forino Sports Complex on the Berks Catholic campus was no different.  The first five possessions (three for the Saints and two for the Warriors) all ended in punts.  The last punt gave the ball to Gettysburg on their own seven yard line.  They drove eighty-three yards in fifteen plays, taking seven minutes and twenty-six seconds off of the clock, but didn’t score any points.  A fourth and six rushing attempt from the Saints fifteen came up inches short of a first down, and Berks Catholic took possession.

It only took the Saints three plays to travel ninety yards and score.  Abdul MacFoy (14 – 110) started the drive by running twice, and getting the ball out to mid-field.  After an unsportsmanlike penalty set Berks Catholic back to their thirty-six yard line, Colby Newton (7 – 121) took a hand-off straight up the middle and raced sixty-four yards for the games first points.  Alex Zavala kicked the extra point, and the Saints led 7-0.

In true Warrior fashion, Gettysburg came right back.  They took possession of the ensuing kickoff at their own fifteen yard line, and drove eighty-five yards in twelve plays.  The five minute, fourteen second drive ended when quarterback, Zach Ketterman ran in from one yard out.  Zach Parr converted the extra point, and Gettysburg was within 14-7 with 10:08 remaining in the game.

In the next Saints possession, the Warriors pounced on a fumble and recovered at their own forty-two yard line.  However, the Saints defense came up huge, forcing a three and out punt.  With less than eight minutes on the clock and the ball at their own twenty-three yard line, the Saints faced a third and seven.  CJ Carwll (10 – 60), ran around the end for thirty-five yards, and a first down.  After six more runs, Berks Catholic was stopped on a fourth down attempt, and Gettysburg took possession at their own thirty-five with 2:58 remaining.

Two passes from Ketterman (6 – 12 – 49 yards) to William Warren (4 – 37), and two runs by Gunner Pennington (16 – 117) had the Warriors facing a fourth and one from the Saints thirty-nine yard line with 1:30 left in the game.  An attempted screen pass fell incomplete, and the Saints took possession.  Three plays in the victory formation ended the game, and Berks Catholic celebrated their win.

Newton stated, “I knew coming into this game that we had to prepare really well and I think that we did, and it showed in the outcome of the game.”  MacFoy said, “It shows that we all work hard so as a team we can get better every week.”  Carwll added, “I’m just trying to contribute as much as I can.  If they need two or three yards they know I’m here to get it for them and occasionally bounce it outside and try to be like them.”

With the win, the Saints advance to the semifinal against Milton Hershey, a 22-10 winner over Conrad Weiser.  That game will be played on Friday, November 15 at Milton Hershey’s Spartan Stadium beginning at 7:00pm.

Gettysburg’s season ends with a record of 8-3. 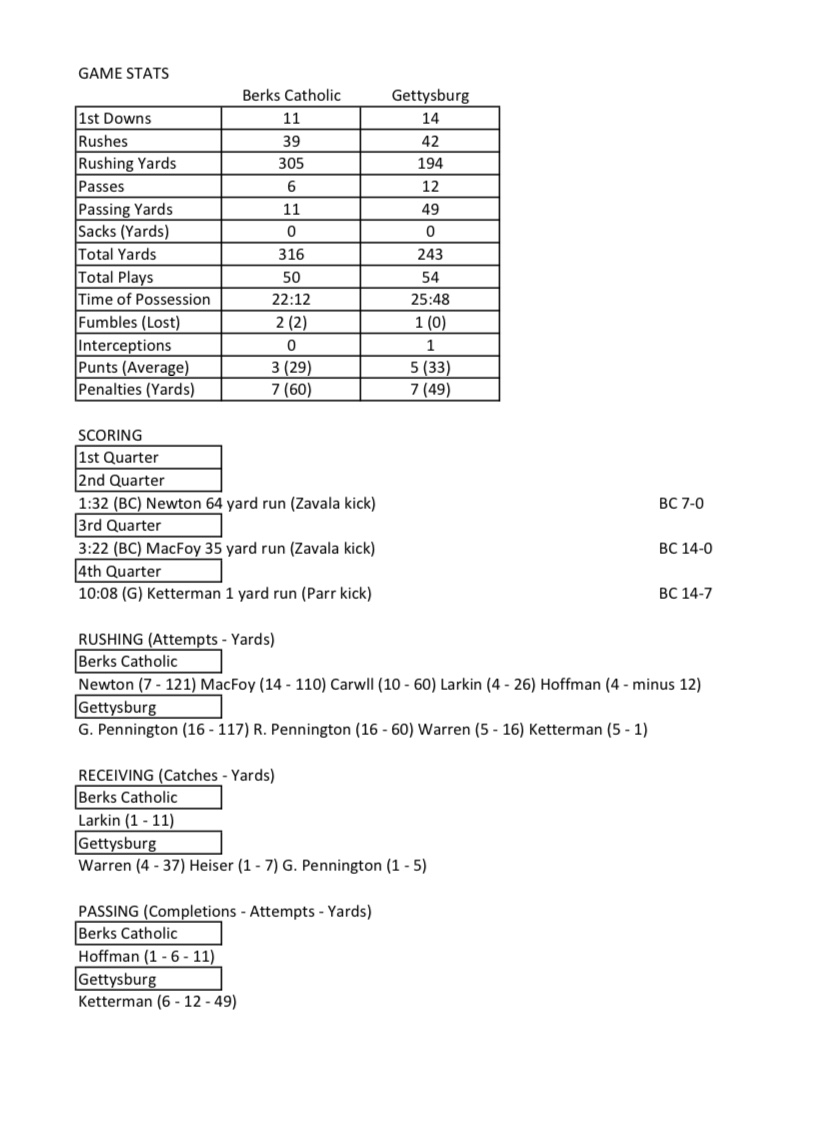