Ridley’s Tahir Mills is no longer a secret 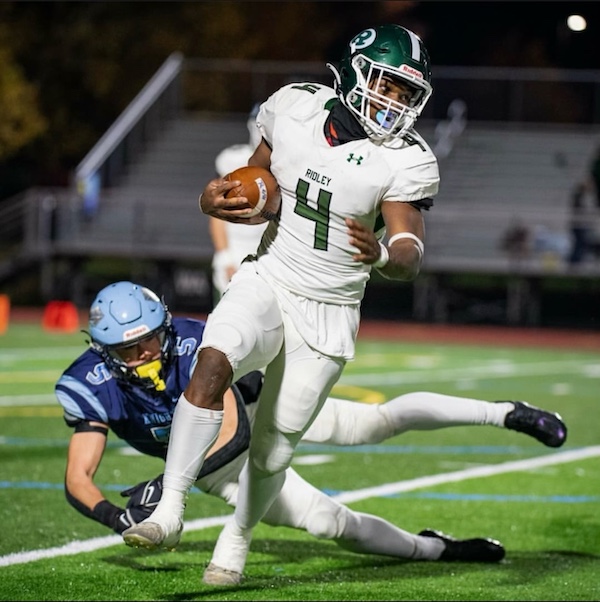 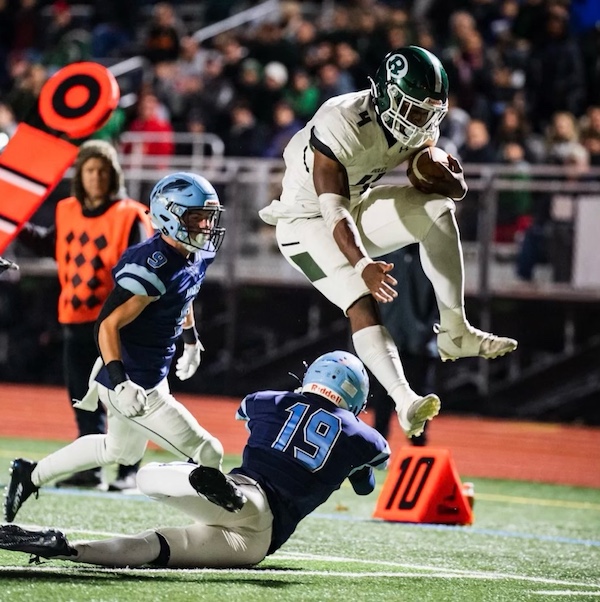 No one was going to stop Ridley’s 6-foot, 205-pound senior tailback Tahir Mills.

And no one did. Mills churned out a 56-yard run late in the fourth quarter of No. 7-seed Ridley’s dramatic 56-55 upset overtime victory over No. 2-seed North Penn in the PIAA District 1 Class 6A quarterfinals to advance to Friday night’s district semifinal at Coatesville.

At this stage of the season, Mills should not be a secret to the rest of the state any longer. In fact, he needs to be mentioned in the same class as the other stellar backs in the area, like La Salle’s Sam Brown, bound for Rutgers, and Governor Mifflin’s amazing Nick Singleton, the nation’s top tailback going to Penn State.

All Mills has done in the last two district playoff games was rush for a combined 726 yards on 72 carries, and 10 touchdowns. He’s averaging 10 yards a carry against defenses specifically designed to stop him.

He snapped Ridley’s all-time, single-game rushing record with 357 yards rushing in the Green Raiders’ 42-23 first-round victory over Conestoga. Then followed it up by breaking his own record with 369 yards against North Penn.

Mills will be the first to tell you none of it would be possible without the push he’s been getting from left tackle Anthony Berry, left guard Khalil Blagmon, center David Rainey, right guard Hayden Brown (Brian O’Dea vs. North Penn) and right tackle Antonio Saahir.

Ridley is 11-1 this season. Coach Dave Wood has done a great job in rebuilding the Ridley program, and this is the farthest the Green Raiders have gone in Wood’s six years in the district playoffs.

At the hub of this success is Mills, who earned the nickname “Tubby” as a kid, because, as he says, he was rather pudgy growing up.

Yet, after pounding one of the best teams in Southeastern Pennsylvania for 397 all-purpose yards in a district quarterfinal victory, including what resulted in the game-winning touchdown in overtime, all Mills could talk about were his two fumbles during regulation.

“That’s Tubby, he’s a perfectionist,” Wood said. “Tahir is a true one-year starter for us. With COVID last year, he played a little running back and played a little wide receiver. We wanted the seniors to get some film, and it was that type of year.

“It was just a matter of time for Tahir to become ‘the guy,’ and he’s shown that this year. He wants to be perfect. Tahir is a humble kid, and he’s a great kid, but he’s really hard on himself that way. That’s a testament to Tahir and his family.”

Conestoga played a 3-3 defense against Ridley, and North Penn had crowded the line of scrimmage, showing as many as nine defenders in the box at times, and Mills still blasted through for huge chunks of yards.

The confusion lies that not many colleges have yet inquired about Mills, who carries a 3.0 GPA and scored over 1,000 on the SAT. He’s rushed for 2,311 yards this season.

“We had the ball with two minutes to play (against North Penn), at our own 20, there was no surprise who we were going to give the ball to, and that was Tahir,” Wood said. “That’s the challenge this week. Our quarterback, John Heller, has made great decisions. This week, Coatesville has speed on the edges, and do they put eight or nine in the box, and do we throw the ball, or give it to Tahir and count on him to beat guys one-on-one and break it.”

All that matters to Mills is that Ridley wins. His fourth-quarter run against North Penn placed the momentum back towards Ridley. He has that fine blend of either running through a defender or can run by them.

“I always had a passion for running the ball, but I didn’t exactly have the physique to do it, you can say I was a little chubby kid,” said Mills, who wears the No. 4 because he’s the youngest of four boys. “I played o-line and d-line. That’s where I got the nickname ‘Tubby,’ because I was a chubby kid. You can say I run angry. That started in Week 7, when I realized I’m nowhere where I want to be. It makes me a little angry that I see some guys and where they’re going to college.

“I hate having flaws. It’s a big part of my game when I hear other running backs getting D-I looks and I want to put myself out there to prove myself.”

If no one knew who Tahir Mills was a few weeks ago, they do now. He’s making his strongest statement in November—when it counts the most.